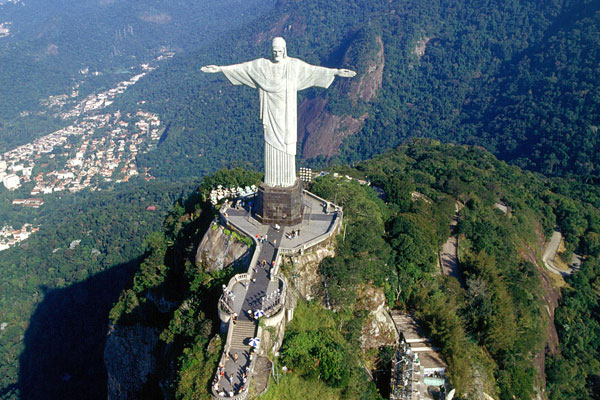 Rio de Janeiro’s most famous resident knows how to put on a show. From his perch on Corcovado mountain in Tijuca National Park, Christ the Redeemer looks down on the wonderfully chaotic megacity beneath him.

But he’s not playing ball on the grey morning when our fam trip group, travelling with South American specialist Latin Routes, is due to see him up close: from the city, he’s shrouded in cloud.

Things aren’t looking good as we hop on the tram that climbs 700 metres to Corcovado’s summit. Then the wind blows. His toes peep through. Next, his outstretched arms; his face and beard; all gradually emerging against a brilliant blue sky.

For the next 20 minutes, we marvel at Christ the Redeemer’s vanishing and reappearing act until eventually he tires of us, retreating behind a curtain of billowing mist. Rio, though, continues to put on a great show.

Take me to Rio

I’m hooked from the plane journey in, gawping through my window at the endless stretch of white apartment blocks squeezed between glistening beaches and rainforest-cloaked mountains.

The sheer size of the city, home to six million inhabitants, is best appreciated from up high, so we catch the cable car to Pão de Açúcar, or Sugarloaf, the iconic peak that’s named after the mound-like shape of what was Brazil’s main export until the late 1800s.

The cable car takes us to the smaller peak of Morro da Urca; a second takes us to Sugarloaf. The view from both is mesmerising: favelas stack up hillsides like Lego blocks, ships sleep in Guanabara Bay and waves from the Atlantic crash onto Copacabana beach.

In Rio, the beach is more than just a sunbathing spot – it’s where life unfolds. On the three-mile white-sand stretch at Copacabana, we’re hypnotised by G-strings wiggling on bums, kids playing football, men flexing their muscles at workout stations, and beach traders flogging their wares. When we arrive, workers are also putting the final touches to the Olympic volleyball area.

Ipanema beach is more hip, with boutiques selling teeny bikinis, Havaianas and leather handbags, while Cariocas (Rio residents) jog or cycle along the mosaic promenade. Though both beaches are safe by day, it’s not recommended to visit them at night.

Rio doesn’t sleep, so we head to Lapa, the centre of Rio’s nightlife scene, for caipirinha-fuelled revelry. For another evening of cocktails and sunset views, we visit Santa Teresa, an artsy part of town up in the hills.

There’s a new, more cosmopolitan Rio taking shape, much of which has been facilitated by the city’s regeneration for this summer’s Olympics. The downtown port area, formerly a sterile financial hub, is now abuzz. Historic buildings such as the church of São Francisco da Prainha have been cleaned up; colourful artworks grace the walls of the Museo de Arte do Rio; and the dinosaur-like construction of the Museum of Tomorrow stands impressively by the waterfront of Pier Maua.

A trip to Barra reveals more of Rio’s changing face. It’s home to the Olympic park and Olympic village, scores of new Miami-style apartments and hotels, and a new metro line linking it to the centre. Even after the Olympics, this area will continue to thrive thanks to a shopping centre, galleries and the Cidade das Artes concert venue. 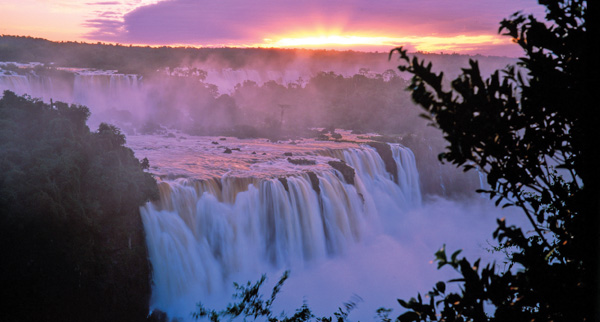 After the celebratory clamour of Rio, Iguaçu brings downtime. The falls, whose name means ‘big water’, straddle the Argentina-Brazil border, with 275 falls stretching for more than one-and-a-half miles, varying between 60 and 82 metres high.

Nothing, though, can prepare you for the wondrous natural sight of Devil’s Throat, an immense U-shaped gorge that thrusts much of the force of the falls into a ferocious, roaring gush.

From the Argentine side, where two-thirds of the waterfalls lie, we tread across myriad walkways to get up close to the spectacular falls, sometimes standing right above them to watch the thundering splash. From the Brazilian side, the panorama allows us to grasp the sheer number of falls. Recommend clients spend two days at Iguaçu, exploring one side each day, to get the full experience.

The highlight is the boat trip, which we take from the Argentine side (prices start from about £60). We pack our cameras into plastic bags, don raincoats and set off towards the falls. We’re still metres away from them but the strength of the water feels as though we’re directly under them. We emerge sodden but exhilarated. 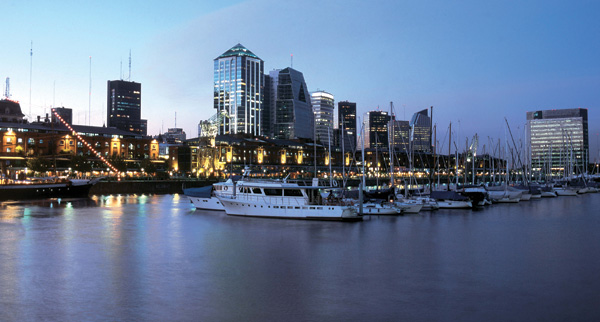 The next day, we visit San Telmo, a charming neighbourhood lined with cobbled streets and bars, and which hosts an antiques market on Sundays. Our excellent guide, Diego, ushers us through a crumbling archway and into the courtyard of what was once a palatial landowner’s house. When an outbreak of yellow fever struck the city in 1871, the rich fled north, and landlords began renting the houses out as overcrowded lodgings for immigrants. It was here in these courtyards that tango was born.

Buenos Aires is greatly indebted to the mix of European immigrants that settled over the years: dubbed the Paris of South America, the city offers a mix of baroque architecture (much of which is located in the centre around Plaza de Maya), world-class food and drink, and a strong arts scene, all married with a sensual, Latin flair.

One of the delights of Buenos Aires is to explore the barrios, each of which has its own personality. Recoleta is where sophisticated locals relax in cafes or shop in fancy boutiques. The area’s highlight is the cemetery, a veritable necropolis of intricate marble mausoleums. Everyone from military heroes to presidents are buried here, including Eva Perón, her tomb bedecked with flowers.

A short cab ride takes visitors to trendy Palermo, which bursts with restaurants, boutique shops and cool bars. There’s also the spruced up dock area, Puerto Madero, whose redbrick warehouses have been converted into art galleries and hotels.

La Boca is where the city’s huge Italian community settled in the 1830s. Many of the immigrants worked along the waterfront, using leftover paint from the shipyards to paint their corrugated iron houses in a rainbow of colours. Caminito is the most touristic street in the neighbourhood and is packed with ramshackle houses, couples dancing tango for change and statues of Maradona, who used to play in the nearby stadium of La Bombonera. (Though it’s safe by day, it’s best not to be in La Boca at night or book accommodation here.)

On our final day in BA, we’re treated to a day trip to San Antonio de Areco in the Pampas, the heart of gaucho country, where we eat an asado washed down with malbec, and ride horses through sun-washed fields.

Older clients visiting Iguaçu should stick to the Brazilian side, which requires far less walking.

Latin Routes offers a 12-day tailor-made trip to Buenos Aires, Iguaçu Falls & Rio de Janeiro from £2,199 based on two sharing and including flights, private transfers and a mix of shared and private excursions. Price is for travel between September 1 and December 10.
latinroutes.co.uk/agents

Jessica Bain, founder, Latin Routes
“Visiting Buenos Aires, Iguaçu and Rio is the perfect introduction to South America through its vibrant cities, incredible landscapes and some of the best food and drink you’ll ever taste. It’s sure to whet clients’ appetite to return.”

Sarah Payne, branch manager, Triangle Travel
“The colours and zest for life in Buenos Aires really struck me. I loved the atmosphere of San Telmo, and riding a horse in the Pampas was a true lifetime experience. With its sunshine, energy and diversity, South America has got into my blood!”

Save
Hotel Moreno, San Telmo, Buenos Aires
This characterful B&B is minutes from tourist spots including Plaza de Mayo, and is Latin Routes’ top seller for clients on a budget. The art nouveau-style building has an original lift, and its Wi-Fi-equipped rooms are modern and spacious. Clients can have drinks on the ample roof terrace, or dine in the jazz club next door.
Rooms from £75.
morenobuenosaires.com

Spend
Loi Suites, Iguaçu Falls, Argentina
Surrounded by rainforest, the Loi Suites are a tranquil choice 20 minutes from Iguaçu town. A series of interlinking pools lends a spa-like vibe, and rooms are reached via a log bridge through the canopy. Rooms are smart and come with jungle views.
Rates from £205.
loisuites.com.ar

CONNECTIONS LUXURY RIO DE JANEIRO will take place October 16-19 at the Grand Hyatt Rio de Janeiro, set along the sandy stretch of Barra da Tijuca. Luxury travel buyers and suppliers are invited to try their hand at some authentic Brazilian activities, such as Capoeira and samba dancing, enjoy the staggering views from atop Sugar Loaf Mountain, and taste succulent meat from a traditional churrascaria barbecue – all while forging new business partnerships.