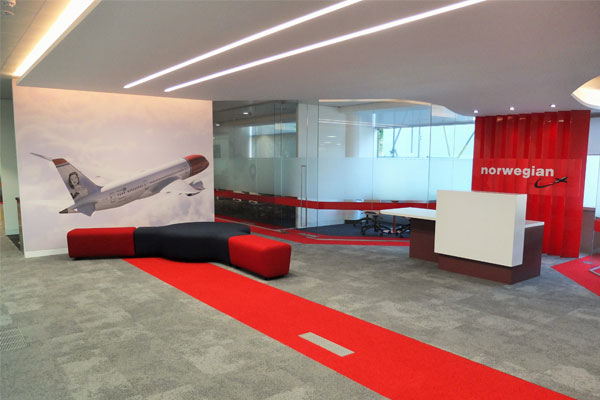 Low-cost airline Norwegian has opened its first UK headquarters at Gatwick as it gears up for further expansion.

The new office is the budget carrier’s first permanent workspace outside Norway.

Key staff in flight operations, training, technical, safety and compliance, communications, marketing and sales in the UK are based at the headquarters.

The airline started seven new routes from Gatwick, Edinburgh and Manchester this year and has grown to become the third largest airline at the London airport.

Norwegian was granted a UK operating licence and has applied for a foreign carrier permit with the US Department of Transportation, which would allow the airline to combine transatlantic services with flights to long haul destinations including Asia, Africa and South America.

Asgeir Nyseth, chief executive of Norwegian UK, said: “This is an exciting new milestone in Norwegian’s pursuit of substantial growth across the UK.

“Our new UK headquarters symbolises our commitment to this hugely important strategic market, and it allows us to grow steadily in an engaging work environment.”

Norwegian has ambitious plans to base more than 50 new Boeing 787 Dreamliners and 100 short haul aircraft if Gatwick is granted a second runway.