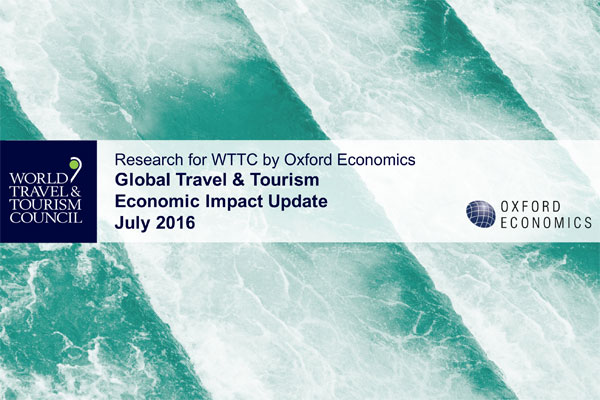 Global travel and tourism is expected to grow by 3.1% this year despite terrorism, political turmoil, global economic developments and Brexit.

The estimate means the sector will outpace global economic growth, forecast at 2.3%, according to latest projections by the World Travel & Tourism Council.

The sector in the UK is expected to hold up well in 2016 with growth of 3.6% even accounting for the impact of the referendum decision to leave the European Union

Weaker domestic spending growth, and a projected drop in UK outbound holidays of 3%, will be offset by higher spending in the by international visitors as a result of the favourable exchange rate, the WTTC says

WTTC president and chief executive, David Scowsill, said: “Our update report highlights the resilience of travellers and the robustness of our sector, as tourism continues to outpace global economic growth by nearly 1%.

“Whilst we should not downplay the impact of incidents or turmoil at individual country level, on a macro-economic level we continue to register strong growth.

“It is important to remember that tourism is a force for good. It brings tremendous social and economic benefits to countries and connects people from different cultures and backgrounds.

“We call on governments to continue to focus on the economic and social benefits of travel and tourism, and to work together with the private sector to combat some of the challenges we face.”

While the global picture remains positive, the outlook for some countries has deteriorated since WTTC’s last forecast in March.

The sector’s direct contribution to GDP in France is still growing, but the forecast has been reduced from 2.9% to 1.1%, due to macroeconomic downgrades in other European countries, and compounded by the recent incidents in the country, including the terrorist atrocity in Nice.

Growth in travel and tourism’s direct contribution to GDP in Turkey has been reduced further from -0.2% to -3.2%, due to the spate of terror attacks, the diplomatic dispute with Russia, the failed coup, and proximity to the Syrian conflict.

The sector is still expected to contract in Brazil, despite the positive effect of the Olympics. Growth has been downgraded from -0.9% to -1.6%, as a result of the political turmoil and weak macroeconomic performance.

The WTTC regional outlook for direct travel and tourism GDP in 2016 shows that:

• South Asia leads the growth at 5.9%, driven by strong economic prospects in India.

• Latin America will be the worst performer, with an anticipated decline of 0.9%, driven by weakness in Brazil.

• North-east Asia and South-east Asia are expected to show solid growth at 4.7% and 4% respectively, stimulated by China growing at 6.3%.

• North America will perform well, with forecast growth of 3.1%.

• Europe will be challenged by lower visitor spend, but will still grow by 2.2%.