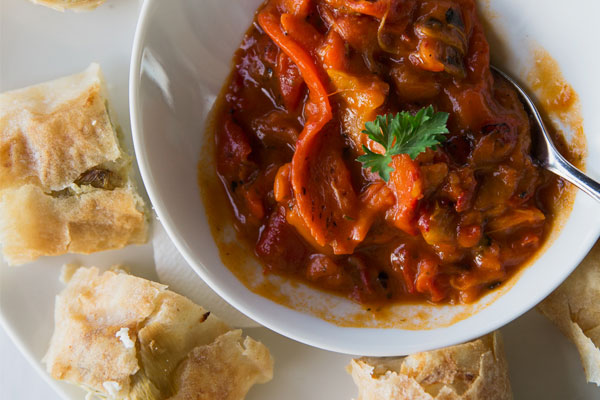 Fancy trying something new on the menu? Get a taste of Macedonia, writes Katie McGonagle.

It was getting late, and despite the bottle of fiery brandy-based rajika going around the table yet again (one more glass? Well, if you insist), it was time to start thinking about sleep.

Sitting elbow-to-elbow around a trestle table in the living room of our homestay hosts, Danny and Tina, surrounded by enough trinkets and lace tableware to out-frill any grandma, we had just polished off a feast of home-baked tear-and-share bread, sweet stuffed peppers and moist orange and cinnamon cake.

But just as we were starting to think of retiring to our rooms, Danny pulled a crumpled black-and-white photo from his pocket, and passed it round. The faces were familiar, but it took a moment to realise it was a picture of the happy pair, taken the best part of 40 years before, during their ‘courting’ days, as he called them.

We might have been hearing the story of how they met and where they married second-hand, ably translated by our warm-hearted Macedonian guide Jané, but Danny’s twinkling eyes and the faraway smile on Tina’s face as he recounted the tale needed no interpretation.

It might sound simple, but that feeling of being welcomed into someone’s home to share a meal and a few memories said far more about Macedonia than any museum or sightseeing tour. It’s just one of a handful of homely experiences that form the core of Intrepid Travel’s new Real Food Adventure to Macedonia and Montenegro, added this year as a refreshing addition to the operator’s line of food-focused escorted tours. 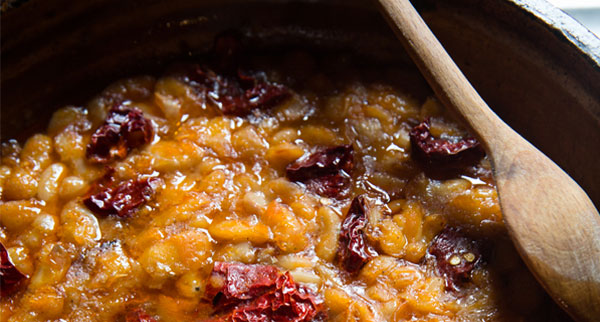 Macedonia? For food? When I mentioned to friends and family that I was going on my first proper foodie tour, the reaction was overwhelmingly in favour – eating and drinking your way around a country is never a bad thing – but when I said it was to Macedonia, the reaction was somewhat more confused. What’s so special about the food in Macedonia?

It’s a crowd-pleasing combination of meaty Eastern European cuisine – spicy sausages and grilled meats feature heavily on most menus – with fresh salads and slow-cooked stews such as creamy bean-based dish tavche gravche, which wouldn’t win any prizes for presentation, but more than makes up for it in flavour.

But the real stars of the show are the cheeses – mostly of the salty, halloumi-like variety, including one that translates as ‘beaten cheese’ but was a lot tastier than it sounds – and fragrant dips that accompany every meal in true mezze fashion. Red pepper-based dip ajvar (pronounce i-var) was so tasty I came home with more than one jar in my suitcase, along with a couple of bottles of Macedonia’s robust, lightly-spiced red wines for good measure.

It’s not just about what’s on the plate, however: the itinerary is carefully planned so each meal is an opportunity to satisfy more than just hunger. We got our fill of scenery on a sailing trip through Matka Canyon, then settled down for a picnic on the banks of the Treska River, devouring freshly-grilled mushrooms as big as a dinner plate and pork chops barbecued right there and then. 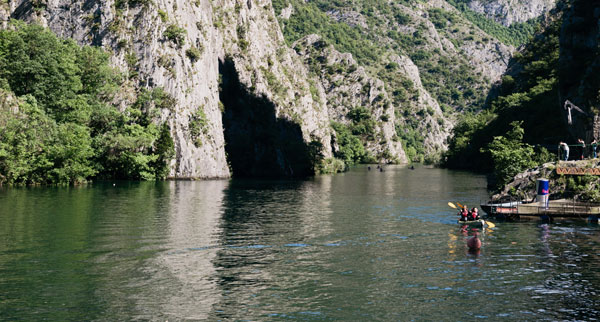 A hike to the top of the peaceful Duf Waterfall – don’t be put off by the name, it’s a real beauty spot – was rewarded with homemade leek-and-spinach pie washed down with a yoghurt-like breakfast drink, boza. It was lucky we’d started with some exercise as that turned out to be just the first of three pastry-based dishes that day – which we christened ‘three-pie day’. We joined local women in a cooking class in Janche to have a go at making cheese pies in a traditional outdoor oven, then finished the evening off with another home-cooked meal complete with slow-cooked garlicky snails, picked by our host, and (you guessed it) a hearty slice of pie.

The moral of the story? A foodie tour is an undoubtedly enjoyable way to get to know a country and its character, but don’t expect to be able to do up your tightest-fitting jeans when you get home.

While the rest of Eastern Europe is known for its low-cost city breaks or cheap-and-cheerful sunshine, land-locked Macedonia has so far slipped under the tourist radar.

In some ways it has much in common with the region – outstanding value for money, warm but not scorching weather, and cheap flights – but its complex history lends a different colour. Its archaeological sites are as rich in ancient ruins as any in neighbouring Greece, while its history of Ottoman occupation – which began in 1389 and lasted more than 500 years – is borne out in twisting bazaars packed with wooden façade-fronted shops and cafes full of locals sipping Turkish tea. 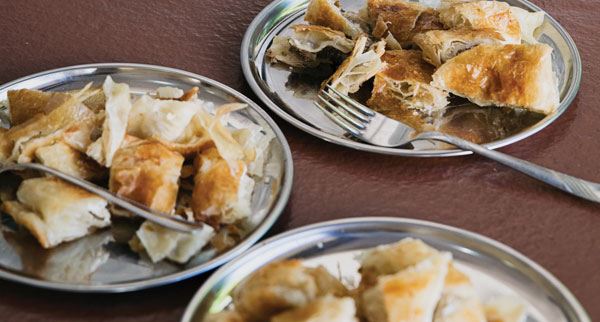 Skopje, the starting point for the tour, is a prime example, with centuries-old mosques tucked away between modern buildings erected since a 1963 earthquake destroyed much of the city’s infrastructure. The real character lies in the sleepy Old Town, where flat cap-wearing old men sit by cafe windows eating burek pastries for breakfast, and in the Green Market, where lively stallholders offer samples of sheep’s cheese and spicy peppers to entice willing punters to make a purchase. You won’t find big fashion labels or the same big-brand shops common to every major city here, but that’s all part of the appeal.

The capital has its beauty spots, but they are nothing compared with southwestern town Ohrid, so named for Lake Ohrid, one of Europe’s largest and deepest lakes, which straddles the border with Albania.

Its shores make an ideal spot for a stroll, but the walled town is an absolute delight, home to a wealth of Hellenistic and Roman ruins including mosaics and an ancient amphitheatre now used for summer concerts. It is renowned as the birthplace of the Cyrillic script, was at the heart of the 10th century Bulgarian empire when Tsar Samuel built a fortress here, and is full of late medieval and renaissance churches known for their well-preserved frescoes; but even the most culture-phobic visitors will find its hilly town centre and expansive lakeside views enough of a draw. 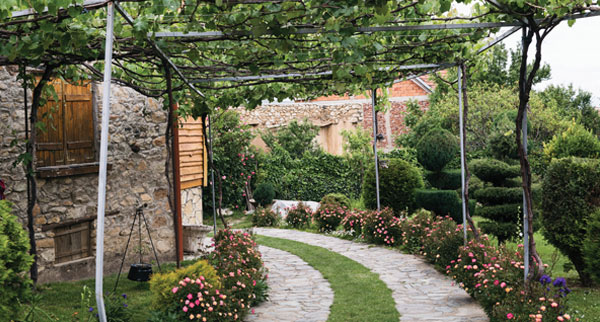 Travelling by road offers a chance to admire some of Macedonia’s lush green countryside, a hit with hikers and mountain-bikers, and home to a host of local producers.

We visited Villa Dihovo near Bitola, where the owners grow organic vegetables, make their own wine, and only use cheese and honey made nearby.

Once you get into wine country, the scenery is just as verdant: largest wine-producing region Tikves is responsible for two-thirds of the grapes grown in Macedonia thanks to its prime soil conditions. The country churns out more than 100 million litres of wine a year, making it the 25th largest producer in the world, and the quality is as good as any you’ll find in the rest of the Med. 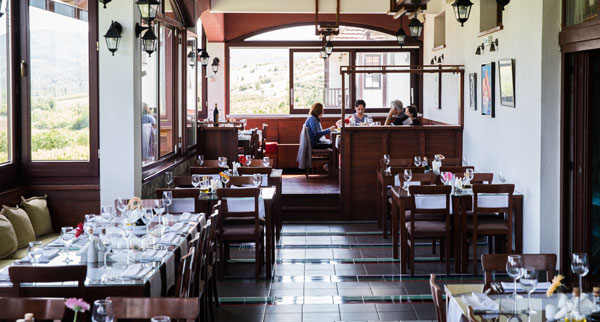 At Popova Kula winery, they still harvest by hand, and are the biggest producers of indigenous grape variety stanusina in red, white and rose versions. More notable, perhaps, is the fact that you can do a wine-tasting with nibbles of cheese and cured meats for less than a tenner – all with the background of rolling vineyards and shadowy mountains in the distance – and bring home a bottle of the good stuff for around the price of a pint in your local pub.

So value for money is a clear selling point, but that’s far from the main reason to go to Macedonia. It’s not as well known as other food and drink-dominated destinations, and it lacks the pizzazz of far-flung, exotic locales, but that low profile actually ends up being part of its charm. Anyone seeking a safe, short-haul spot with the thrill of discovering somewhere new and relatively unexplored will find it here – just make sure they bring a good appetite!

Foodie tours can be a great seller with second-time visitors – if they went on a mainstream tour and fell in love with local food the first time, suggest they delve deeper with a trip that includes cooking classes, market tours and the chance to chat to local producers.

Intrepid Travel’s new 10-day Real Food Adventure to Macedonia and Montenegro starts at £1,260, including accommodation, some meals, ground transport and a local guide. There is one remaining departure in September, and five from May to September 2017. intrepidtravel.com

Wizz Air operates five flights a week to Skopje (daily, apart from Mondays and Fridays) from Luton, with fares starting at £18 one-way, including taxes and charges. wizzair.com

Hotel Residence Inn, Skopje: this starting point for the tour is a central hotel with surprisingly spacious rooms, even if the fixtures and fittings feel more ‘90s than noughties, offering easy access to the compact city centre.

Hotel Teatar, Bitola (pictured): after a recent refurb, this property combines a heritage feel in its shared spaces with a modern makeover for its bright, funky rooms, plus a breakfast spread that would put bigger hotels to shame.

Homestay, Leunovo: Danny and Tina Lazareska’s guesthouse is just one of the friendly, comfortable homestays on this itinerary, with sizeable rooms available on a twin-share basis (same-sex share option available for single travellers).