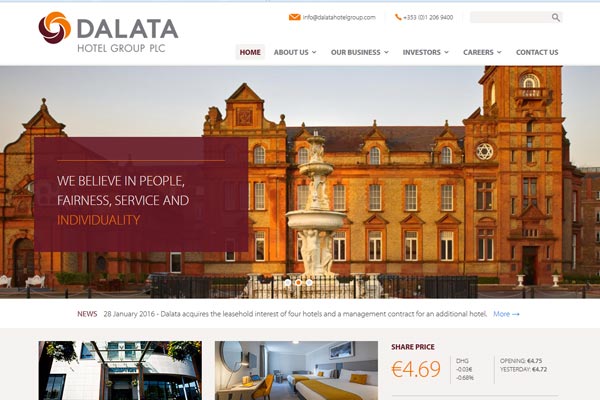 Ireland’s largest hotel group today reported trade ahead of expectations in the first half of the year but warned about the potential negative impact of the Brexit vote.

Dalata Hotel Group cautioned that the UK decision to leave the European Union has created “some uncertainty” for the business for the rest of 2016.

Risks include a significant reduction in the value of sterling which would make Ireland a more expensive destination.

The referendum decision could also have an impact on the general economic activity in the UK and Ireland which in turn would affect the numbers of people looking to stay at hotels in both countries.

Fluctuations in the value of the pound could also affect earnings and asset values of the group as UK subsidiaries are reported in sterling and translated into euros.

However, the group said: “Prospects remain very strong for the hotel market in Dublin and the regional cities in Ireland. The impact of Brexit on the UK hotel market is not yet clear.”

Dalata’s portfolio includes three hotels in London, three in the UK regions and two in Northern Ireland which collectively represent almost a quarter of group reveue.

Reviewing the six months to June 30, group chief executive Pat McCann said: “Trade has been ahead of our expectations with the Irish hotel market performing exceptionally well in the period.”

He added: “Trade in our Irish hotels has been very strong in July and August while it has been in line with our expectations in our UK properties.”

Dalata confirmed the acquisition of the Maldron Hotel in Cork for €8.1 million and the exchange of contracts to but three buildings adjacent to its Maldron Hotel Parnell Square in Dublin for €5 million to extend the property.