“It’s so green, it’s like walking through a massive salad bowl,” said a friend. She wasn’t wrong; this is one lush island.

Dominica (pronounced Dom-in-EEK-a, and not to be confused with the Dominican Republic) fully deserves its ‘nature island’ tag. South of Guadeloupe and north of Martinique in the eastern Caribbean archipelago, with the Caribbean Sea to its west and Atlantic to the east, two thirds of Dominica is rainforest. Thanks to high rainfall and an abundance of rivers, streams, lakes and waterfalls, it’s ridiculously verdant. It’s volcanic too, with mud pots and geysers testament to the geothermal activity rumbling below.

Independent from Britain since 1978, English is the official language, and with just 70,000 residents spread across 289 square miles, Dominica radiates a gentle, uncrowded vibe. In fact, the island’s many centenarians credit its relaxed pace and healthy living to their longevity. This is the Caribbean for people who don’t ‘do the Caribbean’, yet it still surprises those who do. It’s time to step into the salad bowl. 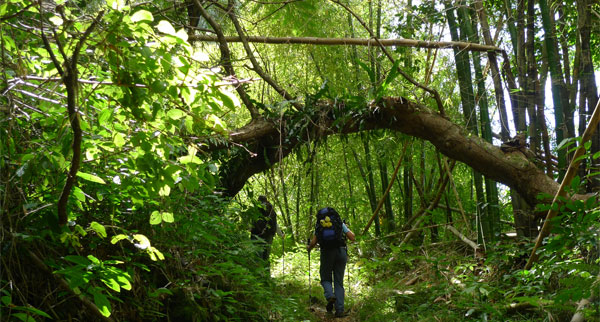 “People come to get away from it all,” says our local guide and driver, Margel Durand. Even the nightlife is laid-back; think roadside rum bars and beach dinners.

What draws people is the wildlife and walking, world-class diving and snorkelling, the canyoning, river tubing and kayaking. And the tourist board’s latest ‘Seeking Adventures’ campaign and website have this in mind, be it active, culinary or cultural adventures. The island was also a filming location for Pirates of the Caribbean, and its rugged coastline, swampy mangroves and green interior leave little doubt why. There’s also year-round whale and dolphin-watching, 170-plus bird species, more than a thousand types of flowering plants, and 300-plus miles of footpaths in Morne Trois Pitons National Park, the first Unesco World Heritage Site in the eastern Caribbean.

Beaches are not typically Caribbean. Expect volcanic, dark-grey sand in the main, although there are classic, honey-coloured sands in the northwest near Portsmouth. For food lovers, Dominican cuisine is often Creole-style with plenty of fresh marlin, mahi-mahi and tuna, dishes such as Dominican broth with seafood, chicken or callaloo spinach, and starchy ‘provisions’ of dasheen, plantain and sweet potato, washed down with a cold Kubuli beer.

A favourite with couples, solo travellers and small groups, Dominica also attracts hikers, birdwatchers and nature-loving families. There’s no international airport, but improved regional connections ensure same-day arrivals from the UK via Barbados and Antigua, and ferries connect to Saint Lucia, Martinique and Guadeloupe. The optimum time to travel is November to April, but don’t dismiss the May shoulder season. Hurricane season typically falls in September and October, but aside from the devastating Hurricane Erica in August 2015, recent years have been calmer. 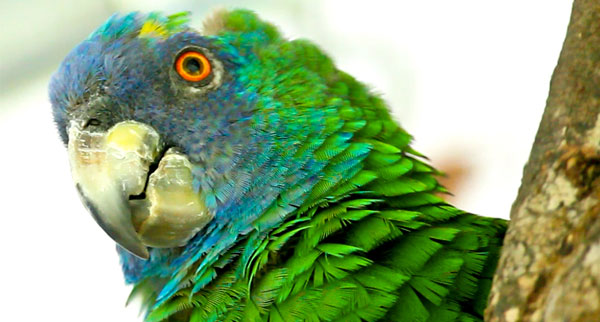 It’s worth spending time in the capital Roseau in the island’s southwest. Its colonial Caribbean architecture reflects Dominica’s French, English and Spanish influences, resulting in an energetic, compact city with a market, shops and botanic gardens. The city is at its most atmospheric during Carnival, the World Creole Music Festival and independence celebrations. Also fascinating is the Kalinago Territory in the northeast, home to some 3,500 Caribs (Kalinago Indians)– homestays, restaurants and a heritage village celebrate their culture.

South of Roseau is the fishing village of Soufriere-Scotts Head, and where the Caribbean meets the Atlantic in a Unesco-listed marine reserve. Join locals at nearby Bubble Beach Spa, a ‘beach club’ with a shack-style beach bar and geothermal sulphur pool. North of Roseau is Champagne Reef where bubbling gases rise from the seabed – it really is like swimming through a warm glass of fizz – and deservedly popular with snorkellers and scuba divers.

Many of Dominica’s treats lie inland. In the Roseau Valley are the Middleham waterfalls and twin falls of Trafalgar, the ‘spa town’ of Wotten Waven with hot springs such as Screw’s Sulphur Spa, and Emerald Pool at the base of a 12-metre waterfall.

For adrenaline seekers, canyoning with adventure company Extreme Dominica is an exhilarating combination of swimming, abseiling, jumping and climbing. They, along with Bushman Tours and others, also organise guides for the challenging eight-mile Boiling Lake hike, to Morne Watt and through the Valley of Desolation before reaching the world’s second-largest boiling lake in Morne Trois Pitons National Park. The views and lake are spectacular, but expect a very achy body in return. Titou Gorge, where the trail ends (and begins), is ideal for a post-walk soak.

Hikers will also enjoy the north-south Waitukubuli Trail that passes through the Northern and Central Forest Reserve. At 115 miles long and split into 14 sections, the name means ‘tall is her body’, the original Kalinago word for Dominica before Christopher Columbus renamed the island.

Other highlights include the Syndicate Nature Trail, a loop rainforest walk at the foot of Dominica’s highest peak, Morne Diablotin in the northwest. In the company of the observant ‘Dr Birdy’, aka Bertrand Jno Baptiste, we spot insects so well camouflaged they’re almost impossible for us to see. This area is also home to Dominica’s rare Sisserou and Jaco Amazon parrots; we manage to hear one, but see neither.

North of Syndicate is the slow-moving Indian River, and a guided boat ride past its swampy river banks and blood-swamp trees is a highlight. Also a Pirates of the Caribbean film location, the hidden jungle bar, where the likes of Johnny Depp and Oprah Winfrey have enjoyed a tipple, is also our perfect spot for a rum punch. 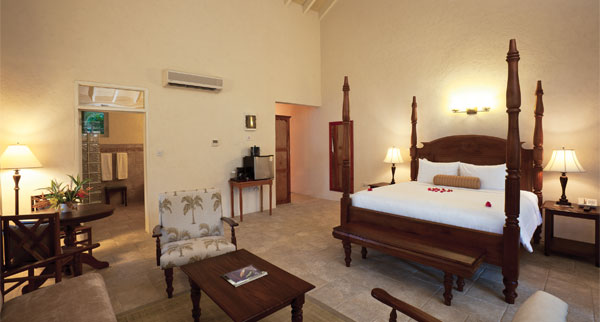 Dominica’s most luxurious resort is cliff-top Secret Bay in the northwest Cabrits National Park. Its six (soon to be eight) villas and bungalows are set in gorgeous gardens, and all have outdoor terraces and high-spec kitchens, while plunge pools, Apple TVs, outdoor showers and sofa hammocks are shared between them.

On the southeast Atlantic Coast is Rosalie Bay’s 28-room eco boutique resort with a nature-focused spa, organic food, yoga and meditation. The owners also initiated a turtle conservation programme, and from March to September guests may see giant leatherbacks, hawksbill and green turtles lay eggs on the beach, or spot their hatchlings emerging from the sand.

In Roseau, suggest Fort Young, originally built as a British fort and popular with locals for Friday nights at its seafront Warner’s Bar. Inland in the Roseau Valley is Papillotte Wilderness Retreat where the aroma of wild herbs, flowers and medicinal shrubs fills its gardens; even non-guests can book a day experience with guided garden walk, lunch, waterfall bathing and hot mineral pool, while at Cocoa Cottages, artist-designed rooms and homemade chocolate reflect its creative owners.

“The human spirit needs places where nature has not been rearranged by the hand of man,” says a quote on Dominica’s Seeking Adventures website. It’s safe to say Dominica isn’t short on these.

Find out more about the island at dominica.dm and dominicaadventures.com

“Inexplicably, Dominica remains one of the least visited Caribbean countries. Encourage customers to overnight. With the majority arriving by cruise ship and departing a few hours later, time your visits to the Indian River, Boiling Lake and Trafalgar Falls wisely, and you can enjoy the privilege of having them all to yourself.”