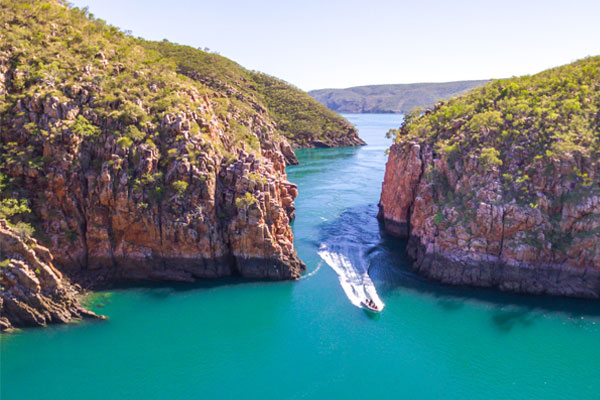 It’s easy to forget that Australia is a continent, with vast differences in landscape and climate. And for anyone used to its world-class east coast cities, green coastal fringes and wine regions, the Kimberley provides something altogether different.

The north-western chunk of the country is proper rugged Australiana – all furious red dirt, remote coastline, waterfalls and adventure. It’s somewhere to feel very small, and filled with a sense of wonder. 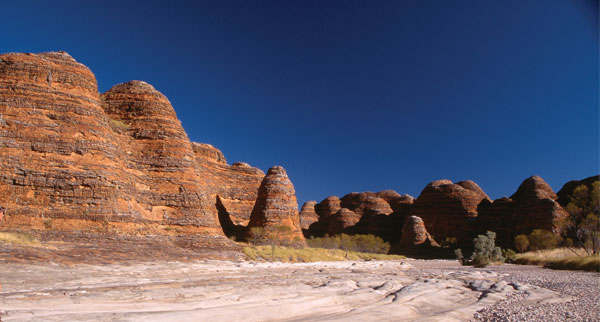 The Kimberley is huge, rugged and remote. Hardly anyone lives in the region apart from Aboriginal communities and oyster farmers. But it has one of the world’s most appealing resort towns on the doorstep.

Broome has a highly distinctive personality. It was built on the pearling industry, and most of the buildings are made from corrugated metal, as it’s the cheapest material to transport long distances. But over time, it has morphed into a quirky tropical outpost, thanks in no small part to Cable Beach – one of the most staggeringly expansive stretches of sand on earth.

As they are in the north, the Kimberley and Broome are subject to wet and dry seasons, with lower rainfall and humidity between April and October. But one of the key selling points is that rainfall is much lower year-round than it is at similar latitudes on the east coast. 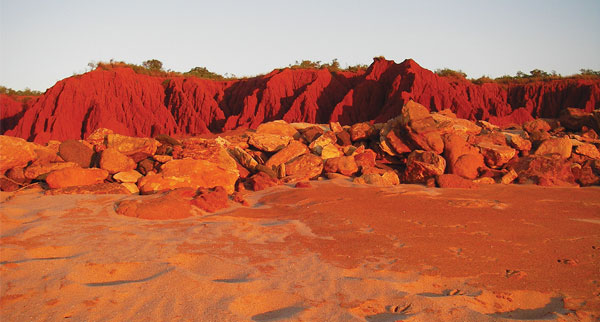 By road, Broome is more than 1,000 miles from Perth, and Darwin is not much closer. But there are direct Qantas and Virgin Australia flights from Perth year-round, with handy seasonal connections from Sydney and Melbourne with Qantas. This means it can be tagged on to a wider Australian holiday with relative ease.Broome can either be used as a base, with a few day trips, or as a launchpad for a road trip around the region. The main road through the Kimberley is accessible in a conventional vehicle, but a four-wheel-drive is a better bet for turning the journey into a loop coming back along the Gibb River Road, accessing some of the most memorable sites.

Understandably, some visitors might be nervy about taking this on under their own steam, so a multi-day guided tour may be a better bet. Intrepid Travel sells a 12-day Great Kimberley Overland trip, starting and ending in Broome, which takes in the tick-box views, but also plenty of smaller highlights. These include swimming in freshwater pools under Manning Falls, walking through the steep-walled Echidna Chasm and cruising along Geikie Gorge. Nights are spent camping, and prices start at £1,492.

For stays in luxury wilderness lodges, APT offers a small-group option with a maximum of 20 people. Its 15-day Kimberley Complete tour does a loop from Broome via the Gibb River Road, Purnululu National Park and El Questro Wilderness Park, with land-only prices from £5,195. 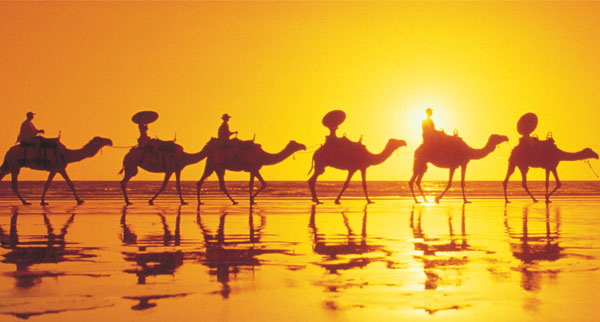 In Broome itself, Cable Beach is the main initial drawcard. It stretches for 14 miles, with off-roaders driving along it to find a prime fishing or sunbathing spot. But the most iconic form of transport there is the camel. Three companies put on rides along the beach, including Broome Camel Safaris, which offers lumbering hour-long sunset journeys for £48 (£37 for children aged five to 15). broomecamelsafaris.com.au

The beach gets even bigger when the tide goes out – and Broome has the third-biggest tides in the world, another highly distinctive feature. The best way to explore the tidal flats is by hovercraft, which can bob over before pulling up on the beach. Broome Hovercraft Tours runs trips that head out to see ancient dinosaur footprints pressed into the beachside rocks, then pull over for snacks and sparkling wine on the flats at sunset (£105). broomehovercraft.com.au

But it’s not all about the beach. Broome’s pearling industry has given it a distinctive history, and an unexpectedly Asian feel (pearl lugger crews were often made up of Asian migrants). 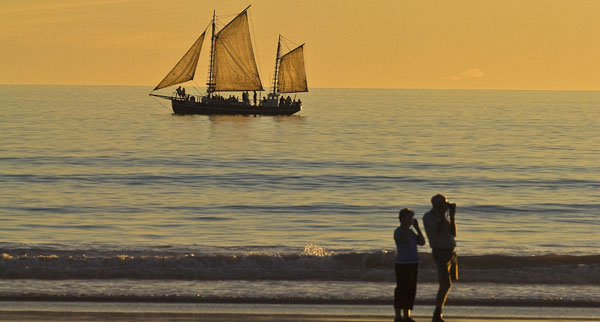 Two luggers are now part of a museum complex (entry £14), which explains how pearl shell was in huge demand for buttons, the dangerous conditions divers endured and why the Kimberley region has the biggest, highest-quality pearl oysters in the world.  pearlluggers.com.au

Just outside Broome, the Willie Creek Pearl farm is the best spot to learn about the modern pearl industry – how the pearls are seeded in the oysters, farmed and looked after. It includes a boat ride along the creek, and a showroom with some seriously sizeable jewellery on sale. A bus tour with hotel pick-up costs £60.williecreekpearls.com.au

Beyond Broome, the Dampier Peninsula with its red dirt roads, indigenous community projects, pearl farms and churches made from shells, makes for a cracking day trip. One rather unusual way to see the area is by tagging along with the postman – Ahoy Buccaneers delivers mail on the peninsula and invites tourists to take a seat on the bus while it makes its rounds (£80).  ahoybuccaneers.com.au

Further afield in the Kimberley, highlights include the eye-poppingly odd beehive-esque rock formations in the Purnululu National Park and the freshwater croc-lined banks of Windjana Gorge. Tunnel Creek – a 750-metre underground tunnel created by an ancient barrier reef, full of small pools and spectacular cave formations – is also a stunner. 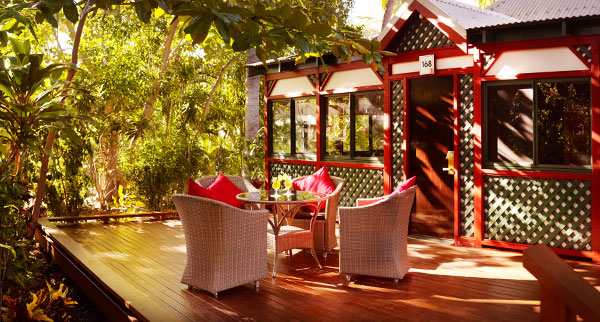 The classic place to stay in Broome is the Cable Beach Club, a resort packed with art and blessed with lush gardens, set just back from the beach that makes Broome such a draw. There are two pools, four restaurants and a spa on site, and the range of rooms includes wooden-floored studios, bungalows with glorious outdoor decks and private  villas with kitchenettes and plunge pools. Studios cost from £141 a night.  cablebeachclub.com

For something completely different, Pinctada McAlpine House is a marvellously atmospheric former pearling master’s home. It is owned by a member of the Paspaley pearling dynasty, and features latticed verandas, billowing gardens, a tea room and friendly parrots.

The buildings are made from the town’s traditional corrugated metal, but the interiors feel relaxed and well kitted out. There are just eight elegant and intimate rooms, costing from £95. mcalpinehouse.com.au

Further afield, some of Australia’s most impressive lodge and glamping accommodation can be found in the Kimberley. Kooljaman at Cape Leveque is owned by two nearby indigenous communities, and offers safari-style tents overlooking the tides and red cliffs. It has a real end of the earth feel, and offers a nice line in activities. These include indigenous-guided tours that teach traditional fishing and mudcrabbing techniques or bush-tucker tastings and spear-making sessions. Prices start at £48.  kooljaman.com.au 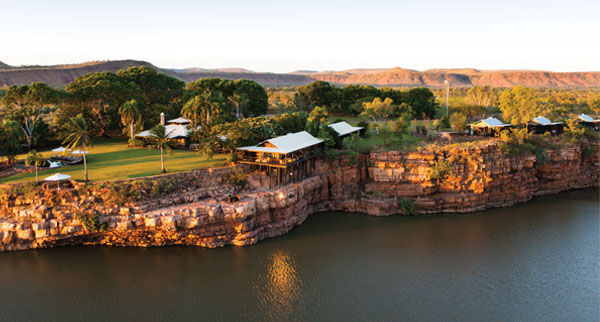 The real star, however, is El Questro Wilderness Park, a 280,000-hectare property offering accommodation ranging from basic camping and cute cabins to unashamedly luxurious rooms in the homestead that come with free-standing baths, tropical garden showers, all-inclusive self-service bars, private decking and enviable views over the neighbouring escarpment. It can be a holiday destination in its own right, as there’s a long list of on-site activities and excursions available. These include fishing expeditions, birdwatching, gorge cruises, horse riding and four-wheel-drive adventures across the outback landscape. Non-camping accommodation starts at £124 a night.

The other option is to not go overland at all. The Kimberley’s coastline – jagged, pristine and dotted with weird natural phenomena – is perhaps the most underrated aspect of the region. Cruises along this stretch of coast take in some of the Buccaneer Archipelago’s 800 islands, the surging tidal waters of the Montgomery Reef and the stupendously weird Horizontal Falls, where the tides create a waterfall effect that goes across rather than down.

There are a few hardy expedition cruises that plough along this part of the coast during the main season, including Northstar Cruises – available through mainstream operators such as Austravel – while those who prefer more luxurious surrounds can upgrade to Silversea’s Broome-Darwin sailings on Silver Discoverer.