Welcome to the Canadian National Exhibition in Toronto (or ‘The Ex’ in local-speak), an annual extravaganza mixing extreme thrill rides and a giant global food court with kitsch civic pride.

Taking place over two weeks every August, the exhibition is the city’s guilty secret, and one that outsiders can wander only with wonder.

While a festival that combines a giant funfair with diverse sideshows including marching bands, parkour demonstrations, pretty-cat contests and vendors hawking unusual eats might seem baffling, could there be a better place for teens? Judging by the reaction of my two – Joseph, 15, and Evie, 13 – it seems not.

Parents with teenagers will be well aware that holidaying with their offspring has its own set of problems, mainly involving the constant need for stimulation. Which is why we’ve decided to forgo resorts and embark on an intense, two-week twin-centre trip, with a rapid-fire assault of Instagram-friendly activities on the menu. Hold on to your phones kids . . . first stop Toronto, second stop New York.

With its waterfront vista, metro system and towering glass buildings, Canada’s most populated city is often compared to the Big Apple. Sure, the pace of life is more relaxed on Lake Ontario, but Toronto has plenty to keep your social media profiles full, even if your visit doesn’t have ‘The Ex’ factor.

“I don’t want to walk around looking at buildings,” Joseph had insisted before we left. But he makes an exception for the CN Tower. Built ‘just because’ – Canadian National Railways simply wanted to demonstrate its might – the Tower experience is a mainstream tourist attraction worth every cent. If looking out on the city above the clouds isn’t enough of a thrill, check out how much fun you can have standing on the strengthened glass floor of the observation deck. It’s the OMG of OMGs. 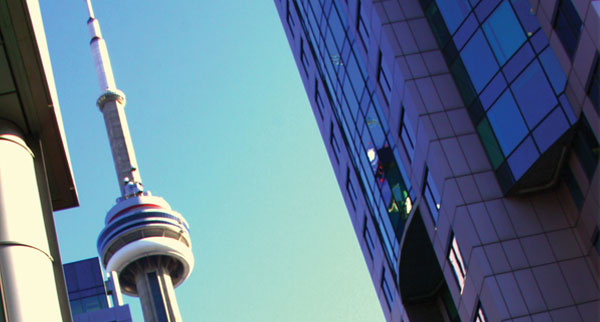 From up there, you’ll notice Toronto Island, Torontonians’ summer weekend playground. The 15-minute ferry ride is ideal for catching some great pictures of the city skyline and there’s biking, plenty of sandy shore to chill on and even a Frisbee golf course. Pop your camera away on the east side though – the nudist beach is not the place for selfies.

Cavernous modern mall the Eaton Centre has all the big stores you’d expect – think Bluewater or the Trafford Centre with extra doughnuts – but the real retail therapy comes among the eclectic independent stores of Kensington Market, which sits at the edge of Chinatown. Drake (“He’s local, you know,” says just about everyone) booms from cool shops and food outlets, and it’s a great place to explore with a freshly squeezed mango juice. Take cash if you’re a vintage fan – books, vinyl, clothes and furniture are plentiful. Toronto’s new relaxed rules on cannabis mean there’s definitely love in the air, too. 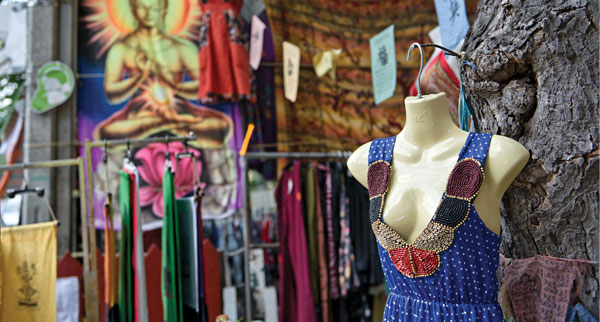 One area where locals are anything but laid back is in their love of sport. Ice hockey rules, but in the warmer months, there’s plenty to keep fans occupied. Toronto is enjoying a Leicester City-style boom, with its football side Toronto FC riding high in the MLS and baseball team the Toronto Blue Jays batting way above its level. A trip to the Rogers Centre for the baseball proved a uniquely Canadian experience: great views, polite fans and plenty of razzmatazz.

A bite of the big apple

While tourists usually head to Manhattan for lodgings, we opted for Brooklyn, following real New Yorkers, who have transformed the borough into the trendiest place to live and eat.

Obviously, the parents came equipped with a list of essential sights to see. But Evie had other things on her mind, having already established that this leg of the holiday was her ‘shopportunity’ to shine.

Must-have cosmetic brand Sephora (‘Where else?’) and cool vintage were the apparent priority, while Joseph demanded his insatiable appetite for processed meat, artisan pizza and anything deep-fried was satisfied, to ease the shopping fever.

The Empire State Building is an impressive introduction to New York, since the view from the top underlines what an enormous experience lies ahead, with a lot of the highlights free. Times Square at night, Brooklyn Bridge, Gantry Plaza with its historic Pepsi sign and the High Line elevated park – tick those off quickly. 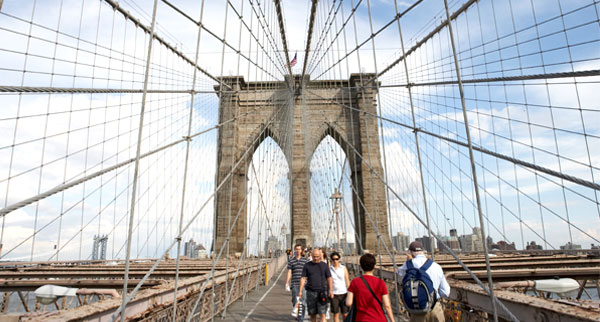 Our apartment in the Prospect Park neighbourhood was a perfect base. The first full day in the city took us to Brooklyn Flea, the acclaimed second-hand market that draws New York’s seriously trendy.

One vintage T-shirt and one colossal brisket sandwich later, we were off again, zipping in to Manhattan for Canal Street’s finest fakery. Later, we joined shoppers on the free Ikea water taxi across the East River, which delivered us right to the door of Brooklyn Crab, a fun-packed spot full of twentysomethings, for the best seafood (and views) you’ll find outside of Grimsby.

CityPasses proved a great investment and opened up a world of options. Who wants to see New York from the boring Staten Island ferry when you can blast along the Hudson River on The Beast, a supercharged speedboat that pirouettes around the Statue of Liberty and soaks everyone on board?

We also set aside a day to head south to Coney Island. The wide sandy beach is the perfect place to recharge after the city’s bustle, before tackling the legendary Luna Park carnival rides that have entertained New Yorkers for a century. 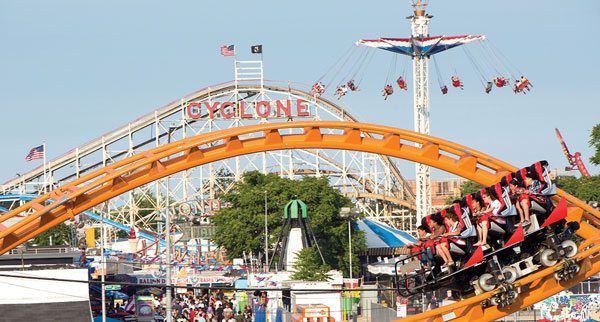 The Nathan’s hotdog certainly lived up to its claim to be the best in the world, adding another belt notch to our food odyssey that also included Tom’s Diner for a traditional pancake breakfast and Suzanne Vega fix; the king of pastrami sandwiches at Katz’s Delicatessen (where Sally shocked Harry); and John’s off Times Square, a former church that’s made pizza a religious experience.

Our final day was given over to yet more shopping. The thrift and vintage stores of Prospect Slope and East Village this time, yielding a stack of last-minute buys that sent us over the British Airways baggage limit.

So did they have a nice time? What was the best? Surprisingly, the answer was the 9/11 Memorial Museum. Sensitive, touching and serene, it cannot be faulted.

“And I didn’t want to take pictures, it’s not right,” said Evie. Now that’s a holiday I’ll have to tweet about.

A twin-centre break in Toronto and New York starts at £4,316 in April for two adults and two teens, with Travel 2. The price includes British Airways flights (Heathrow-Toronto, Toronto-New York, and New York-Heathrow), three nights at the Delta Toronto hotel in a family city-view room, and three nights in a studio suite at the Manhattan NYC.
travel2.com

Three of the best add-ons

Pork this way: Why is Toronto sometimes called ‘Hogtown’? Find out with the When Pigs Fry tour, a three-hour trek around the city’s porcine past and present. Teens might not love the history, but there’s plenty of bacon, pork and sausage to sample en route.
£45 with Urban Adventures urbanadventures.com

A pizza the action: Getting a table at Brooklyn pizza joint Lucali is famously tough (we couldn’t get in – no surprise, given David Beckham and Beyonce are regulars). Your best bet is to take The Slice of Brooklyn Pizza Tour, which looks at the food, history, landmarks and movie locations in the borough, from Dumbo down to Coney Island. It includes two slices of Brooklyn pizza, from Grimaldi’s brick oven, and L&B Spumoni Gardens’ Sicilian pizza.
Adults £66, under-13s £58 with Travelcube.
travelcube.com/uk

It’s a rap: Baz Luhrmann’s hit Netflix series The Get Down has sparked renewed interest in the roots of hip-hop. Go back to the old skool on The Birthplace of Hip Hop Tour. Taking in the most important sites in street music, the three-hour bus trip calls at secret rap-battle venues, historic clubs and the Graffiti Wall of Fame in Harlem. There’s even a ‘show your skills’ segment. Tours are led by legends including Grandmaster Caz, Kurtis Blow and Rahiem.
Adults £60, five to 14-year-olds £46
viator.com/uk