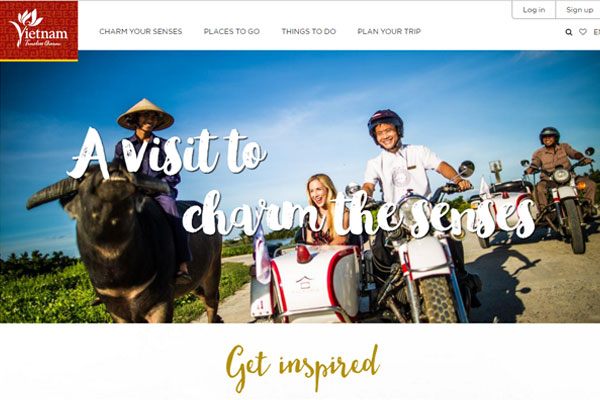 Vietnam today unveiled a new website for tourists in a bid to step up its marketing efforts in the UK and beyond.

The site – vietnamtourism.vn –  is the first official portal for tourists looking to come to the country and seeks to market the destination as a hub for nature, culture, gastronomy and ‘timeless charm’.

Work on the site began almost a year ago in partnership with Ogilvy One Worldwide with the goal of helping visitors better plan their trips and share travel stories.

Speaking at a WTM press conference, VNAT’s Vice Chairwoman Ms. Nguyen Thi Than Huong said it was part of an increased effort to promote Vietnam abroad. “We have a limited budget on marketing so we will see other kinds of activities to promote Vietnam, such as launching the new website, instead of setting up a representative office abroad,” she said.

Panel member Hawkins Pham, General Director of the TAB said: ’One of the key initiatives was to better market the country – for those interested in Vietnam you know that we have many beautiful landscapes, a wonderful culture and a fantastic food offering but how do you market and position that – that was one of the key challenges that we decided to focus on.

“We chose to go digital because we recognised the need to outsmart our competition, we know 70% of travellers will research a destination online before they book. It also provides a hyper sensitive mechanism for targeting our effectiveness – we can look at specific populations in the UK and apply spending to that, whether it’s Google or other platforms. Now we’re working with various media agencies including Ogivly One to start allocating that budget, and we’ll be using private resources as well as government funding.”

The country is increasing its digital offering more generally with a new E-visa service set to launch on 1 January 2017, which will enable visitors to arrange their visa online for the first time (UK visitors are still part of the 15 day exemption.)

“The procedure is much simpler now,” said VNAT’s Vice Chairwoman Ms. Nguyen Thi Than Huong. “The ministry of foreign affairs is preparing for this system now – we still need approval from the National Assembly, but we hope to have that by the end of this month.”

Vietnam welcomed in a record number of visitors this year with 1.5m touching down in the country from the UK and Europe; it’s hoped this will reach 3.5m by 2020.