With cruise holidays effectively banned for the past 14 months, aficionados were never going to be reluctant about sailing at sea again.

During my short taxi ride from Southampton Central station to City Cruise Terminal, the driver admitted it felt strange returning to the UK’s main cruise hub.

You only had to enter the cruise terminal to experience the palpable pride from passengers, port staff and the MSC team on duty about being involved with the first sailing back.

Even though the wind was howling outside in between the rain showers, there was little that could dampen the enthusiasm of those present for the first cruise in British waters for more than a year.

MSC’s marketing slogan for its latest flagship is ‘Masterpiece at Sea’. Arguably, the most eye-catching artistic feature of the vessel is the 112-metre long LED sky dome that runs through the heart of ship.

The line cleverly displayed the Union Jack flag on the walkway to perfectly capture the patriotic mood abounding round the ship.

I spoke with Lawrence Beaumont-Hays and his wife Janice, who had travelled south from York to join the historic cruise in Southampton.

Although the couple had both taken one or two cruises before Virtuosa’s debut sailing, this was their first voyage with MSC.

Lawrence said: “Normally we’d spend the winter away, but we’ve been locked down in our house. This [sailing] popped up and I thought why not?” 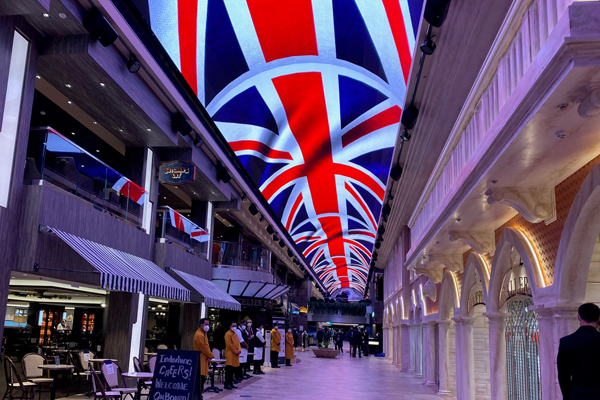 Fe Josephs, from Watford, who booked through online travel agency Iglu, said: “This is our first time with MSC and I’ve been cruising many times – maybe about 15 in total.

“We have been locked down for so long, staying inside our house, now it’s time for freedom.”

But what has been telling so far on MSC Virtuosa’s maiden voyage along the south coast is the number of new-to-cruise passengers the line has managed to attract.

Almost 550 of the passengers on board have never cruised before, MSC Cruises’ UK boss Antonio Paradiso told Travel Weekly during a Facebook Live broadcast on board.

This booking trend has been confirmed by other agents on board – some of whom have paid for the sailing out of their own pockets.

Cruise.co.uk sales consultant Carl Newbigging said he believed that the 19-deck ship “caters for everyone”.

“With all the bars and restaurant areas, it appeals to new-to-cruise [passengers] and couples,” he added. “You don’t have to worry about green, amber or red list [on MSC Virtuosa].

“There is not much you have to worry about because there is no quarantine or test to release afterwards.”

It is clear there’s a real opportunity for the UK cruise industry as other lines begin to offer restart sailings around these shores. In a bid to make cruises more accessible, Paradiso has made Greenock and Liverpool embarkation ports for Virtuosa’s subsequent seven-night sailings later in the season.

Aside from the face masks which passengers must wear when moving around the ship, there are few noticeable changes to life on board. MSC has gone out of its way to strike the balance between health, safety and fun.

That said, due to current government restrictions, only 1,000 passengers are on MSC Virtuosa this week and it certainly shows when ordering drinks and food on board. The crew, which in some areas dwarf passenger numbers, are only too happy to take your order.

MSC has more experience of running cruises during the pandemic than many others. According to Paradiso, more than 70,000 passengers – almost all of whom were not vaccinated – have cruised with the line in the Mediterranean since August last year.

The most obvious change to the cruise experience was the inclusion of a nasal swab test administered by a hazmat-suited test official during check-in. The sight didn’t knock us off our stride, but it was unlike anything British passengers had seen before in a cruise terminal.

As we enjoyed dinner in Minuetto, one of the five main dining restaurants on board, the crashing waves of the English Channel outside were clearly not up to speed with the significance of the occasion.

But instead of being glum about the British weather, we were just overjoyed to be back on board.

What are your first impressions of MSC Virtuosa and its maiden voyage?

“We are massive supporters of MSC Cruises. The whole of the travel industry is looking at MSC right now. It is not just about the cruise ship but holidays generally coming back into the market. MSC has done an amazing job with MSC Virtuosa’s maiden voyage. They have got a unique opportunity to get passengers on board. It is a great product and the lead-in price for this cruise was £499. After today, [demand] will go through the roof.”

“I am very impressed with ship. It’s very modern and contemporary. There was that wow factor when you are walking on deck six and there was that Union Jack flag on the LED dome and then last night it changed design. I thought that was amazing. It does tick quite a few boxes – definitely new-to-cruise passengers and families. I was very impressed with the kids’ club. There were more activities available than on some other lines’ ships. It’s very family orientated like the business itself.”

“The ship has been fantastic so far. I think it caters for everyone. I have a daughter myself and I would say it works for families. With all the bars and restaurant areas, it appeals to new to cruise [passengers] and couples. You don’t have to worry about green, amber or red list [on MSC Virtuosa]. There is not much you have to worry about because there is no quarantine or test to release afterwards. You would spend more going to London or Center Parcs.”

MSC Cruises to base at least 10 ships in Europe