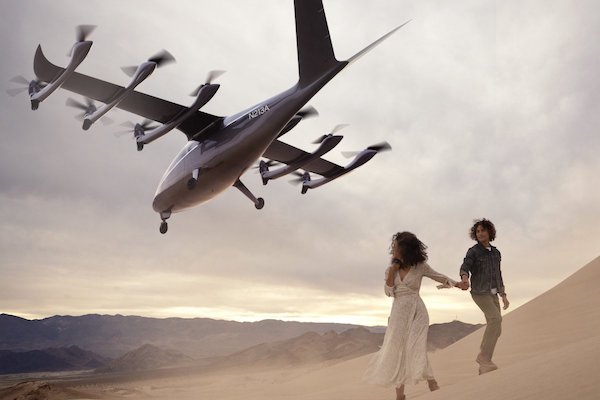 United Airlines is working with a firm that is developing ‘air taxis’ for urban areas, as part of the carrier’s investment in technology to tackle climate change.

The airline has partnered with California-based Archer Aviation to accelerate the production of the short-haul electric aircraft to help decarbonise air travel.

Under the terms of the agreement, United will use its expertise in airspace management to help Archer develop the battery-powered aircraft.

Once the aircraft are in operation, United and Mesa Airlines plan to buy a fleet of up to 200 of them, in an order worth $1 billion.

The aircraft are expected to give customers a “quick, economical and low-carbon way” to get to United’s hub airports and commute in dense urban environments within the next five years.

Archer’s aircraft can fly up to 60 miles, at speeds of up to 150 miles per hour, and future models will be designed to travel faster and further.

United estimates the aircraft could reduce CO2 emissions by 47% per passenger on a trip between Hollywood and Los Angeles International Airport (LAX), one of the initial cities where Archer plans to launch its fleet.

Scott Kirby, United chief executive, said: “By working with Archer, United is showing the aviation industry that now is the time to embrace cleaner, more efficient modes of transportation.

“With the right technology, we can curb the impact aircraft have on the planet, but we have to identify the next generation of companies who will make this a reality early and find ways to help them get off the ground.”