MSC Cruises has officially named MSC Virtuosa in Dubai as part of its “long-term commitment” to the United Arab Emirates.

The ceremony at Port Rashid was attended by godmother and Hollywood icon Sophia Loren, who addressed the crowd in English and Italian, ship captain Francesco Veniero and local dignitaries.

Loren (pictured) smashed a bottle against the 6,334-passenger ship’s hull to complete the christening. Singer Rag’n’Bone Man also performed before a firework display and a gala dinner on Saturday.

Virtuosa is sailing out of Dubai in the Arabian Sea until March 2022. The ship spent last summer operating round-Britain cruises from Southampton and was the first cruise vessel to resume UK operations during the pandemic.

Pierfrancesco Vago, executive chairman of MSC Cruises, said: “We’re honoured to host this maritime tradition ceremony in the United Arab Emirates, to mark our longstanding and long-term commitment to this region. 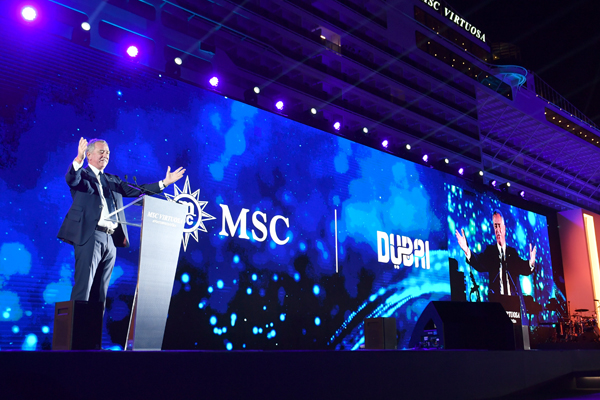 “This is also why this winter MSC Virtuosa, one of the most technologically and environmentally advanced ships in our fleet, will homeport in the country as part of our deployment in the Gulf region.”

He added: “Cruising is an integral part of the UAE’s dynamic tourism industry. Thanks to our uniquely global distribution network we will continue to promote the country and the Middle East all around the world as an attractive holiday option to support the further growth of the tourism industry locally.”

Around 126 cruise ship calls into Dubai are scheduled this winter, according to Ahmed Bin Sulayem, group chairman and chief executive of logistics firm DP World.

“To ensure that the port continues to be an integral contributor to the UAE’s economy and a significant economic pillar of Dubai, we are working to enhance its capabilities,” he said.

“We will strive to ensure that the emirate continues to gain recognition globally as a world-class cruise destination.

“We’re also expecting a total of 126 ship calls and over 500,000 cruise visitors for the upcoming 2021-22 cruise season. This will further bolster Dubai’s tourism figures and drive our progress.” 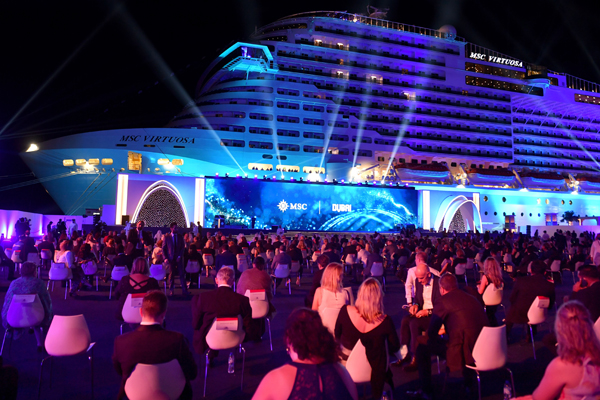 Attendees at Virtuosa’s christening in Dubai

The ship also has a 112-metre promenade with a LED sky dome.

Destinations include Abu Dhabi and Sir Bani Yas Island in the UAE, and Doha in Qatar.