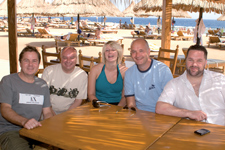 The dynamic packaging trend is still going strong, according to trade professionals who took part in a discussion on the sector during a VIP trip to Sharm el-Sheikh hosted by youtravel.com.

Growth of the dynamic packaging sector

There is no sign of the dynamic packaging trend slowing, according to the trade.

She said: “We have seen a huge change in terms of dynamic packaging in holiday searches. Agents are selling accommodation-only and low-cost flights and can now offer lots of different room types.”

Youtravel.com sales and marketing director Paul Riches agreed: “Technology is giving retailers access to flights that were not there a few years ago.”

He added: “This is a significant change. As yet, low-cost carriers don’t go to Greece, but it will happen.”

Cooper warned the ongoing success of the sector depended on access to flights and warned some carriers may not give the trade full access to seats. “I think low-cost carriers will to some extent ring-fence their stock but not necessarily give it to the high-street [to agents].”

Todd added: “Traditional operators will always be there but the dynamic packaging market will go on growing.”

Triton Rooms operations director Andy Claridge added that holidaymakers were becoming more savvy and will now ask whether their holiday is ATOL bonded. He said: “People are more aware of financial protection.”

Allocation-on-arrival accommodation could become less popular for dynamic packages, according to Claridge.

He said customers were increasingly choosing to pay extra for named accommodation in resort. “People want to know what they are getting and there’s not much of a price difference.”

Customer complaint levels are not necessarily higher if booked as dynamic packages, according to agents at the round table.

Claridge said: “If complaint levels were that high we would switch them [the bed bank] off.”

He said complaints were more likely to be driven by problems with individual companies and the way staff handled them.

Triton Rooms and Triton Holidays’ complaint levels for this summer ran at just 1.75%, he added. “This figure is considerably lower than for traditional operators.”

Riches added: “We have cut out properties that were not up to standard.”

Sanders said the company takes complaints so seriously it operates a ‘three strikes and you’re out’ policy for companies that do not offer transparent prices. “I took 11 clients off our books last month,” she added.

Dynamic packaging companies could be forced to give greater commitments to hotels to stop a repeat of this summer’s over-booking problems.

Over-booking of accommodation was one of the biggest problems for dynamic packaging suppliers this summer, with destinations such as Greece among the worst hit.

“Hotels are adapting but they have to be organised. Many more dynamic packaging companies will have to take more commitments on properties.”

Cooper said its agents would rather sell through bed banks than commit to accommodation themselves, particularly as destinations go in and out of fashion.

He said: “Why would we risk it? It would mean having staff out in resort and it’s a fixed cost. The big four [operators] ripped up commitments because they were losing money.”

Claridge said the company was considering whether to take commitments on rooms. “There is an argument to take two or three properties as flagships,” he said.

There are unlikely to be new players in the accommodation-only sector as more companies predict consolidation.

Youtravel.com sales and marketing director Paul Riches said: “At the moment no particular bed bank stands out but to come in now and take a share of the beach market would be difficult.”

He expects larger companies to buy accommodation-only specialists rather than bed banks to merge. “Larger bed banks could targeted by overseas organisations that want to get into that market,” he said.

Product development director Matthew Todd predicted existing bed banks would specialise where possible. “In the end you [the bed bank] can become synonymous with the destination it doesn’t happen overnight.”

Kwik Travel product and operations manager Bill Cooper added agents already had more than enough accommodation-only suppliers to work with. “There is only a finite number of rooms. I wouldn’t work with new bed banks – why would I make it more complicated for more staff?”