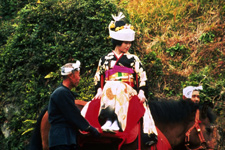 With wedding dresses often cheaper overseas, many women who plan to marry abroad are now opting to buy their frock outside the UK too.

Suggest they head for one of these shopping hubs – they’ll find wedding dresses aplenty and you will have sold another holiday.

Japanese brides usually have a minimum of three elaborate dresses during the wedding celebrations, including a colourful kimono and a white wedding gown.

The Japan National Tourist Organisation recommends that British brides buy a vintage kimono or hire a dress if they are marrying in Japan. Try Hayashi Kimono, in International Arcade, 2-1-1 Yurakucho, Chiyoda-ku, Tokyo which has English-speaking sales assistants and a good variety of kimono, costing from as little as £80.

Wealthy clients could visit Nijo Maruhachi, in Kyoto, which sells exquisite custom-made wedding dresses. When Princess Diana went to Japan, the company gave her a kimono as a gift.

Sample package: Magic of the Orient offers a half-board 11-night Discover Japan tour in November for £1,395 per person, including transfers, tours and some meals. The tour takes in Tokyo, Mount Fuji, Hiroshima and Kyoto.

Milan is Italy’s shopping capital, but even dedicated fashionistas may be shocked by the outrageous price tags.

Clients that can afford it should head to the exclusive boutiques on the Golden Quadrangle. For beautifully preserved wedding dresses dating back to the 1900s, recommend L’Officina delle Fate, in Piazza Sant’Erasmo.

If fairytale wedding gowns are more their thing, suggest the opulent Atelier Aimee in Via Montenapoleone 29, which is decorated with lanterns and a glass chandelier. The store even stocks tailored suits for the mother of the bride.

If £1,000 to £5,000 isn’t a problem and they want an unusual designer dress, make an appointment at Domo Adami, in Via Manzoni 23. The shop can also help out with hair and make-up if your clients are getting married in Italy. There are more designer stores in the architecturally stunning Galleria Vittorio Emanuele (pictured).

While shopping in Milan, remember that most shops close for an hour or two at lunch, giving shoppers time for some delicious Italian cuisine.

Sample package: Citalia offers five nights’ bed and breakfast at the four-star Grand Verdi Hotel in Milan for £351 in December 2007, based on two sharing, including flights.

Thai capital Bangkok is a great place to pick up a made-to-order wedding dress from one of the hundreds of tailors that line the streets.

Brides-to-be can buy some cheap, but beautiful, silk at a fabric stall at Chatuchak market, the city’s top shopping spot. Then they can go to a tailor, who can copy the design of their choice and make a dress in no time.

Tourism Authority of Thailand marketing manager Abi Silver said: “One of my friends got married in Thailand and she got her dress made in Bangkok just four days before the wedding. She got the tailor to copy a Vera Wang design and paid £160 for it.”

It’s best to allow at least two days for a dress to be made, added Silver. “Although they can often turn it around in 24 hours it’s nice to have time to go back for a second fitting.”

Asia, Cambodia and Vietnam are also recommended for their abundance of excellent tailors.

A wedding dress is probably the last thing you’d expect to find in Fiji, an archipelago of over 330 islands in the South Pacific. But Fiji is teeming with talented tailors and seamstresses.

Give them a picture of a design and some fabric and they will create a wedding dress very quickly at a bargain price, while your client relaxes on one of the island’s stunning beaches.

A Kuoni spokesman said Phil Boswell said: “There’s a long tradition of tailoring among the Indian people of Fiji and buying clothes from them is excellent value for money.

“Fiji is a great place to stop on the way to Australia. It’s quite off the beaten track but it’s beautiful and the service in hotels and restaurants is exquisite.”

Sample package: Kuoni offers 14 nights at the five-star Sonaisali Island Resort, Fiji for £2,506 in January 2008, including flights and transfers.

There is an annual sale of designer wedding gowns at Filene’s Basement department store in New York. Brides-to-be can save hundreds of pounds – the next sales takes place on February 29 2008. The Boston store has two sales a year.

There are bargain wedding dresses galore – brides could even pick up a much sought-after, cut-price Vera Wang frock. The event is so frenzied that it receives worldwide press attention. On sale day, women queue outside the store from the early hours.

It’s quite a sight as hundreds of frantic females strip to their underwear and start trying on the dresses before bartering with other shoppers in the hunt for their perfect gown.

Sample package: Virgin Holidays offers three nights’ room-only accommodation at the three-star Flatotel in New York from £707 in February, including flights and transfers.