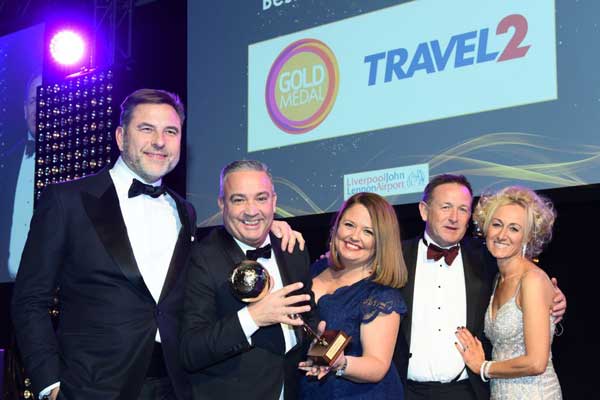 Winners of this year’s Travel Weekly Globe Travel Awards have thanked the trade for their unwavering support.

Thousands of agents voted in this year’s awards which honour top suppliers from across the industry.

Gordon McCreadie, director of sales and marketing, said: “We are totally chuffed. We can’t put it into words, we’re just absolutely delighted that agents felt we were the right winner for these prestigious awards.”

Tracey Hirsz, head of sales, added: “We’ve streamlined our sales teams with both Gold Medal and Travel 2 this year. They are two independent brands but agents love them both.

“It means we’ve got more people on the road looking after smaller regions, therefore they can spend more time with travel agents.”

Nick Hughes, sales and marketing director, Attraction World, said: “It’s amazing to have the continuing support from our trade partners; the support we receive is overwhelming and it’s not something we take lightly.”

Jet2holidays head of trade Alan Cross said a double win for the package holiday arm and Jet2.com was “the icing on the cake”.

He said: “This is the best award that we have won. We appreciate the recognition we are getting from agents nationally.”

We’re expanding further south – we’re moving into Birmingham and Stansted, so hopefully even more people will appreciate what we do.

Thank you very much to our agents, we couldn’t have done it without them – it’s a partnership, we provide a great product on our airline, and the travel agents appreciate that – we think it’s a great relationship. Long may it continue.”

Emirates also scored a double win, being named Best Long-Haul Airline and Best Premium Airline Service for the third year in a row.

Laurie Berryman, vice president UK and Ireland for the airline, said: “We are delighted to win these again and we would like to thank the travel trade for their unwavering support over the last 12 months.

“Covering the whole UK from Glasgow down to London, we have over 20 sales executives on the road talking to our agents, and we have great sales support teams in Glasgow, Manchester and London. We really value the trade.”

Vice president and managing director, UK and Ireland and Asia, Jo Rzymowska said: “We consistently over the last eight years have shown that we have a genuine commitment to the travel trade. If we hadn’t worked in partnership I don’t think we would have been as successful as we are.”

Best operator UK holidays went to SuperBreak. Director of sales Jane Atkins said: “This means the world to us. It’s testament to the support we get from the trade and the team.”

Director of business development, leisure, Neela Goyal said: “We have engaged with the travel trade for years face to face to it’s great to be rewarded for all those efforts.”

Managing director, Laurence Hicks,  hailed the efforts of their trade sales team and agents, he said: “They’re engaging with agents all the time and agents are embracing our product with free business class upgrades, two for one offers – that really gives value to clients on the Wendy Wu product.

“We value the support they all give us and we will always support the trade, they’re very important to us.”

Ben Bouldin, associate vice president and UK & Ireland managing director, said: “After winning this 11 years in a row I would just like to, on behalf of all our hard working team, say a special thanks to our retail team and our account managers out on the road.

“I am delighted with Club Royal and the amazing cruise specialist agents we have been able to meet along the way and who have supported us.”

Best river cruise company was awarded to Uniworld. UK managing director, Kathryn Beadle said: “We are just so overwhelmed and speechless at winning this enormous accolade.

“It is such a wide category to be in and the fact the travel trade voted for us is just brilliant and overwhelming.”

“I’d like to give a huge thank you to the travel agents – we’ll continue to do everything we can to support them. The trade is 30% of our business so it’s a massive part of what we do.”

Best tourist board was awarded to Dubai with associate Khalid Mansoor Al Awar pleased with the gong.

He said: “We have some very exciting years ahead for Dubai with the opening of two parks, changing the dynamics of the destination to be more family orientated.

“By 2020 we want to be the top family destination in the world.”

Account manager, Stuart Wilmer said: “This is such a great category. There are some amazing theme parks across the the world so to come out on top is brilliant.

“It is all down to the work of the teams in the resorts.”

The gong for Best Premium Touring Service stayed in the same hands, as Insight Vacations scooped the award.

Director of sales Paul Melinis said: “This is four years in a row, and I would like to say firstly thank you so much to every travel agent and travel partner who voted for us, because without them, it wouldn’t be possible.

“We are so proud as a brand and as The Travel Corporation family that we have won it for four years in a row, and we will continue to give that service to all of our agent partners.”

He added: “We are always working very hard to continue to improve our customer service, and travel agent are our customers too.

Carter said educationals, such as the recent trip for 50 Co-Op agents to Lapland, also helped the operator retain its Globe award after bagging the honour in 2016.

“They had the time of their lives,” he said. “And they can experience the product they are selling so they can do it with more confidence.”

“I’m surprised and proud of the fact that travel agents have voted for us. We are hands on, have a quality product and a competitive price.”

Manchester Airport was voted the best airport in the UK.

“We don’t under-estimate the value of the trade.”

Kuoni scooped the award for best luxury operator. UK managing director Derek Jones said: “We are delighted; particularly because the award is voted for by the trade.

“We work really hard to support the trade and try not to take our eyes off the ball.”

Director of sales Patrick Ryan said: “We thank the travel trade for their support. They’ve helped what was a very small company five years ago become a real success. The fruits of our labour have paid off.”

Paul Broughton, managing director for UK and Ireland, said: “We had a very strong 2016 and won a lot of business.

“We are redefining travel commerce . Travel agents that what we are working towards is getting away from being a traditional global distribution system to be a modern travel platform that gives them every solution they need.”

Trade co-ordinator Cathy Cook said the 15th anniversary of the first book, Harry Potter and the Philosopher’s Stone, was pivotal.

She said: “We focused our campaigns on the first book and the trade really bought into that.”

The Best Accommodation-Only Operator was won by Bedsonline. Tom Bell, UK and Ireland country manager, said: “We’re proud and honoured. It’s an award we’ve been trying to win for a few years. We’ve diversified our product beyond hotels, focusing particularly in the past year on transfers and attraction tickets.”

Holiday Extras was named as Best Insurance Provider for a ninth year in a row. Ashley Close, head of travel insurance partnerships, said: “We’re so excited to have won this year. This is our ninth year in a row – and we’d love to make it 10 next year. We’ve updated our system in the past year and strive to offer a hassle-free service for the trade, offering good commission and keeping abreast of what agents want.”

The Best UK Hotel Chain accolade was won by Hilton. Leisure sales director Jane Richardson said: “We’re delighted to have won and thank our trade and travel partners for voting for us. We engage with the major travel retail stores and we know consumers like booking us through the trade. We have great brand recognition, so that gives agents confidence to book us for their customers.”

View our gallery from the night