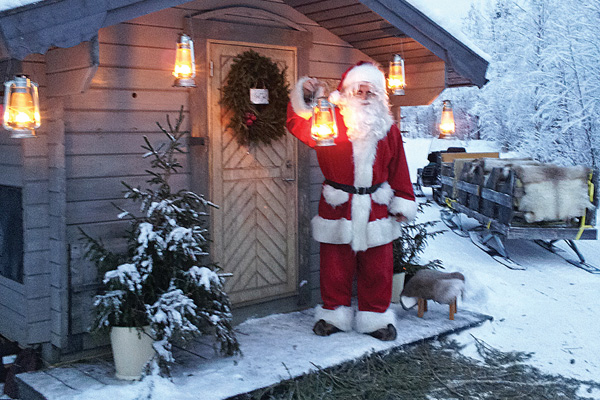 Too soon to start thinking about next Christmas? Not if you want to bag a break to Lapland, finds Janine Kelso.

For families with young children, there’s no better way to capture the magic of Christmas than going to visit the real Father Christmas in Lapland.

It might feel as if the festive season is only just over and that next Christmas is awfully far away, but if you want to guarantee a much-sought-after trip to Lapland, there really is no such thing as booking too early, with many clients reserving their spots more than a year ahead.

So to see what all the fuss is about, my boyfriend Pawel and I took our five-year-old daughter Mila on a one-day fairytale adventure to Pajala in Swedish Lapland with Newmarket Holidays to meet the man in red and find out what other snowy activities are on offer. 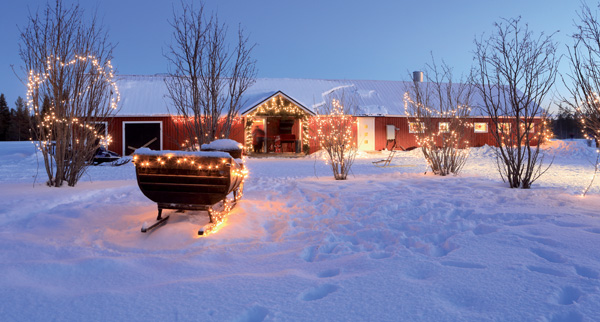 Before the trip, the idea of such a short jaunt to the frozen north sounded slightly bonkers, with the chartered flight departing at 6.50am and returning at 9.30pm. But with December such a hectic month – particularly for families with kids in school – a one-day trip is an appealing option.

That said, there’s no sugar-coating the fact that the day begins with a monstrously early start, with our alarms going off at 3.30am. We put our sleeping daughter into the car at 4am and she fortunately snoozed all the way to the airport, waking only when we got there at 5am.

The magic started on the three-hour flight to Pajala, when we enjoyed festive sing-a-longs and a hearty breakfast. And most importantly, children were given paper to write their letters to Santa.

We were swiftly bussed to Santa’s village in just seven minutes, where we were sized up for thermal snowsuits, boots and gloves

On the plane, Mila buzzed with excitement as we gazed down at mile after mile of frozen lakes and snow-covered forests. “I’m so excited that even my toes are excited,” she said.

Arriving at Pajala’s titchy airport, we zoomed through customs as we were the only flight arriving that day, before being welcomed by our hosts dressed in traditional Sami attire. We were swiftly bussed to Santa’s village in just seven minutes, where we were sized up for thermal snowsuits, boots and gloves, essential for surviving the ice-box temperatures: a nippy -25C. 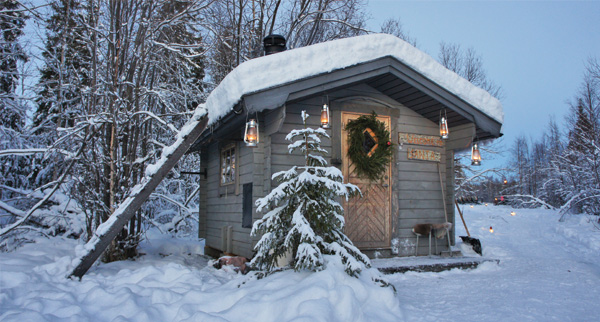 Gloriously remote and otherworldly, Pajala is a dreamy snowy wilderness, 50 miles north of the Arctic Circle. Pristine and unspoilt, it’s reachable by plane for only one month a year, when Newmarket Holidays operates its one-day Lapland trips to the area.

Lapland’s winter climate is extreme: there are only about two hours of sunlight every day and temperatures can drop as low as -35C. 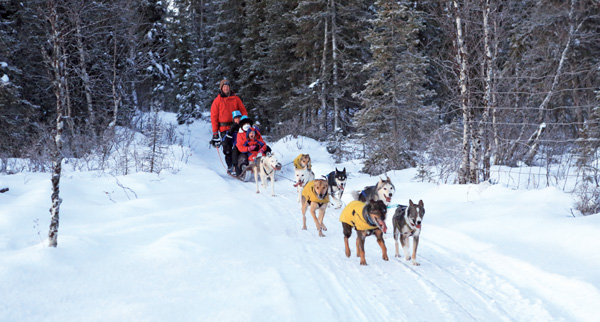 Since our group were the only visitors at the village, it didn’t feel too touristy and crowded, although there were short queues for some of the activities, when everyone huddled around fire buckets for warmth.

Our reindeer sleigh ride through the forest was a wonderfully festive and peaceful experience, passing under canopies of overhanging branches dripping with snow, at a slow walking speed. 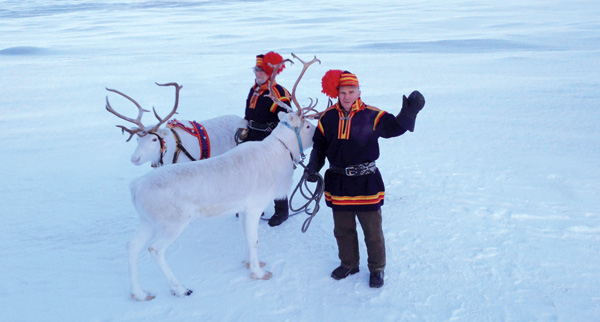 When the sun began to set amid a pink sky, we upped the pace by jumping aboard a husky-drawn sled for an exhilarating ride through a lantern-lit pathway between the trees, the wind whipping our faces as the dogs raced through the forest.

The sun disappeared completely at about 1pm, enveloping us in a blanket of stars. The sky took on an ethereal glow before darkness fell and the village was transformed into a festive wonderland, prettily lit with fairy lights and lanterns.

We retreated into the village’s cosy restaurant to tuck into a traditional Lappish lunch of meatballs and soup. Decked out with vintage pictures of Father Christmas and stunning wilderness shots, the restaurant also houses a small shop that sells gifts, hot drinks and snacks.

Every time our fingers and toes began to ache with the cold, we’d retreat to a snug tepee where there was a roaring fire, a steamy cauldron of hot berry juice and biscuits

The thick snow provided the perfect playground for Mila to make snow angels and throw snowballs (although the snow was too cold to make a snowman!). 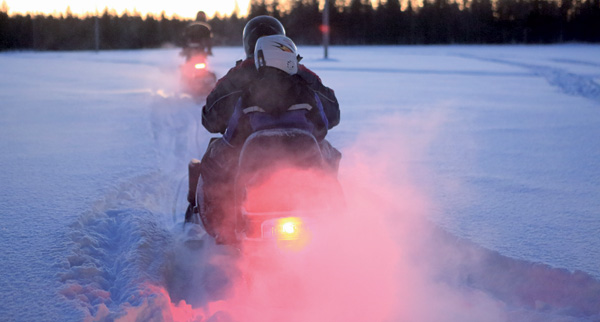 But her favourite activity was tobogganing down a hill on mats and tyres, where there were few people and no queues. Every time our fingers and toes began to ache with the cold, we’d retreat to a snug tepee where there was a roaring fire, a steamy cauldron of hot berry juice and biscuits.

It was then time for the adults to have some fun. With the moon as our guiding light, Pawel and I took it in turns to whizz across the glistening, starlit snow on a thrilling snowmobile ride, which we operated ourselves. Children can hop on a sleigh behind the snowmobile, but Mila chose to hunker down indoors with a hot chocolate.

The purpose of our trip was meeting the Big Man himself. We followed a lantern-strewn trail through a snowy forest until we found Santa’s cosy log cabin. We knocked on the door and were greeted by a cheery bearded Santa, who welcomed us warmly, asking for Mila’s letter and giving her a small gift, before we made a dramatic return to the village on a fast-moving motorised sleigh. 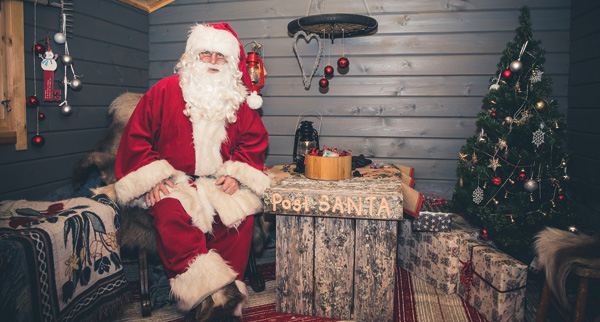 There was then time for some more tobogganing before we had to head home.
Our journey back to London was quick and efficient – we were bussed to the airport in four groups, passed straight through security and boarded the plane straightaway.

Our whirlwind day out was charming and magical, a once-in-a-lifetime trip with plenty of wow moments

On the way home, there were lots of tired but happy little faces. The crew gave everyone certificates to confirm that we’d crossed the Arctic Circle, probably more of a badge of honour for the parents than the kids. 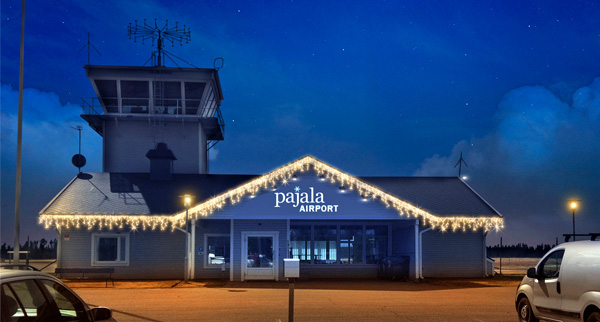 The magic continued after we returned home, as Mila received a letter from Santa saying how pleased he was to have met her.

Our whirlwind day out was charming and magical, a once-in-a-lifetime trip with plenty of wow moments, where the cold and thrill-a-minute fun kept fatigue at bay.

Wrapping up warm is essential. Remind clients to wear thermal layers, scarves, thick socks, hats and boots, as temperatures can drop to a chilly -35C.

Anyone who wants to have a go on a snowmobile will need to show their driving licence.

Visitors should bring a few nibbles as it’s a long day and the lunch is not really substantial enough to satisfy those with large appetites.

Suggest that clients stay at an airport hotel the night before the trip, so that they don’t have to endure such an early start.

Bring a single-use camera, as the temperatures can affect cameras and mobile phones.