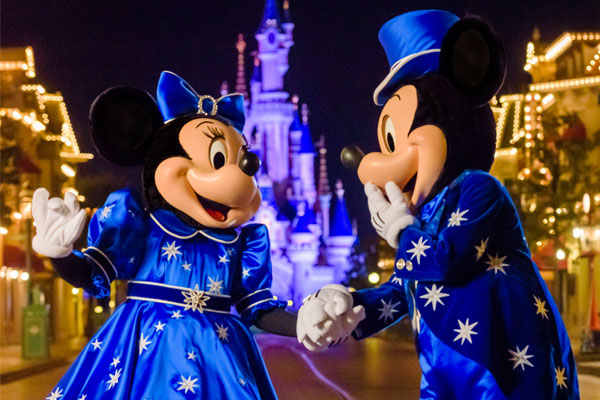 Laura French looks at what’s new in the world of theme parks and attractions.

There’s no such thing as a dull moment in the sparkling sphere of theme parks, but this year looks set to be exceptional. From the launch of Universal’s Volcano Bay to the opening of PortAventura’s Ferrari Land, Efteling’s 65th anniversary to Disneyland Paris’ 25th, theme park fanatics will have plenty to get excited about over the year ahead thanks to a host of extravaganzas. Here’s a sneak preview as to what’s in store. 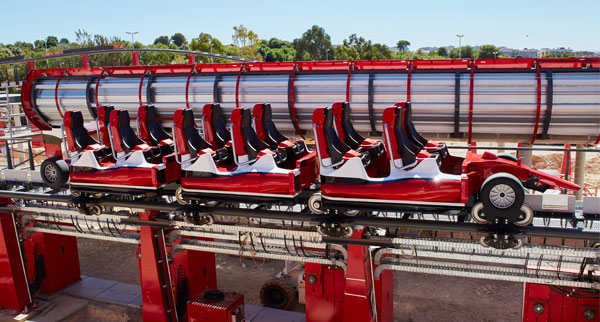 Spain’s PortAventura will be putting the foot on the gas on April 7 when Ferrari Land – its third theme park to date – opens, bringing with it 11 new attractions, including Europe’s fastest and highest rollercoaster, Vertical Accelerator. The new ride promises to reach speeds of 112mph in five seconds while soaring to heights of 112 metres, giving would-be Formula One racers a taste of life in the fast lane.

Those with less of a need for speed will be able to try the Ferrari Experience and the Ferrari Land Gallery, an interactive journey exploring the history of the brand. There will also be a freefall tower, F1 simulators and a children’s speedway designed to mimic F1, alongside Italian-themed restaurants, shows and street entertainers (tickets for both parks cost £52 for adults).

In France, Disneyland Paris will be ringing in its 25th year with a string of new attractions, including Star Tours: The Adventures Continue. 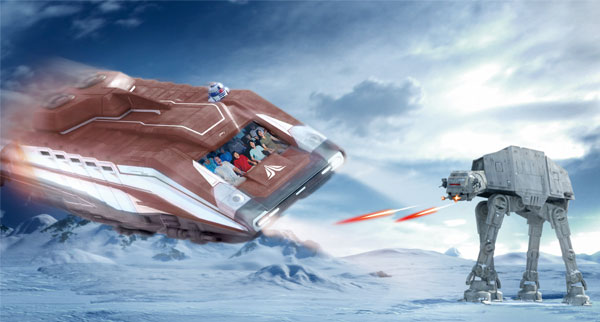 An update on the original Star Tours – which opened with the park in 1992 – it will take guests through Star Wars-inspired planets with new 3D technology and effects, featuring 70 mission combinations to ensure a different experience each time. The theme doesn’t end there – fans will be able to meet Darth Vader himself, for a quick encounter with the dark side.

Space Mountain is being transformed into Star Wars Hyperspace Mountain: Rebel Mission, turning riders into pilots as they whizz through the Star Wars galaxy to themed music from the saga, with plenty of special effects and visuals in tow.

And in true Disney fashion, the Sleeping Beauty Castle will be illuminated each evening with an anniversary show presented by none other than Mickey himself, who will be sporting an extra-special celebratory outfit to mark the milestone.

In other news, the Netherlands’ historic, fairytale-themed park Efteling will be celebrating its 65th anniversary with the launch of a $35 million ride – Symbolica: Palace of Fantasy – representing the park’s biggest yet. From July, the family-friendly indoor attraction will meander throughout the ‘hidden rooms’
of a royal palace, whisking kids and parents through a fantasy land in the dark. 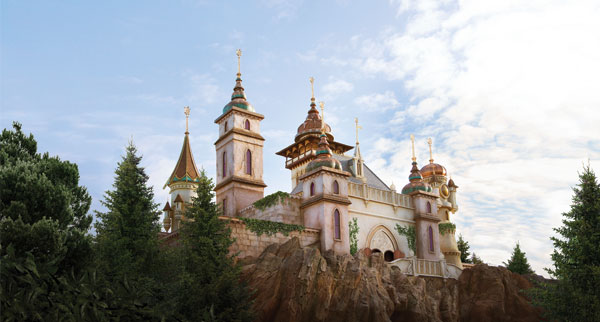 And visitors wanting to sample it will have a new place to stay, thanks to Efteling Loonsche Land, a holiday village opening on May 31. The area will feature a three-star hotel with 75 rooms as well as 65 holiday homes nestled among forests, sand dunes and sprinklings of heather.

Over in Germany, Europa Park will be launching a ‘flying theatre’ simulator called Project V, designed around aviators Egbert and Kaspar Eulenstein. Passengers will sit in gondolas and glide through two theatres with wind, water, scents and 21-metre screens.

Closer to home, Drayton Manor’s James and the Red Balloon family ride opens on April 1 in the recently expanded Thomas Land, while Alton Towers is welcoming two new attractions in CBeebies Land. Plus Legoland Windsor will be introducing the UK’s first 4D, hand gesture-enabled ride at Ninjago World, a ‘ninja training camp’ opening in May.

The new feature will involve rock climbing, temple building and ‘Spinjitzu’ spinning attractions alongside the ride itself, in which passengers will blast fire, ice and lightning using their bare hands – one worth highlighting to clients who want in on the action without having to venture too far afield. 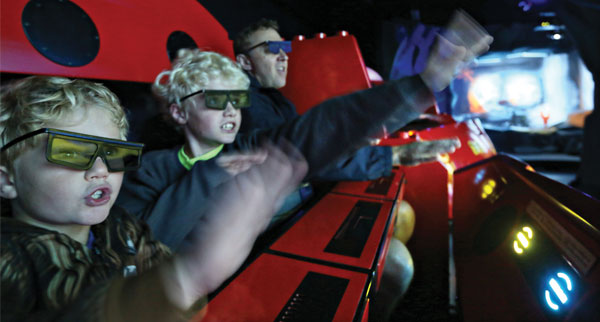 It’s not only Legoland Windsor getting in on the ninja game, though – clients heading to the US might be interested to hear that Florida’s Legoland has opened its own Ninjago World, where kids can meet characters, build a Ninjago Monastery and test out their reflexes on ‘Jay’s lightning drill’.

There’s also a brand-new, beach-themed accommodation area opening up right next to the park. Aptly named Beach Retreat, it will house 83 single-storey duplexes alongside a themed pool, play area and restaurant, all set by an idyllic-looking lake.

Over in Orlando, Universal’s Volcano Bay is getting the attention. The 30-acre water park, designed with tropical islands in mind, will open on May 25 with a host of attractions, from a multi-directional wave pool complete with sandy beaches to a gentle winding river, adrenaline-pumping body slides and twisting, multi-rider raft rides. Among the more innovative aspects is the fact that guests will be able to queue up virtually with a TapuTapu wristband they’ll get on arrival, cutting waiting times significantly. 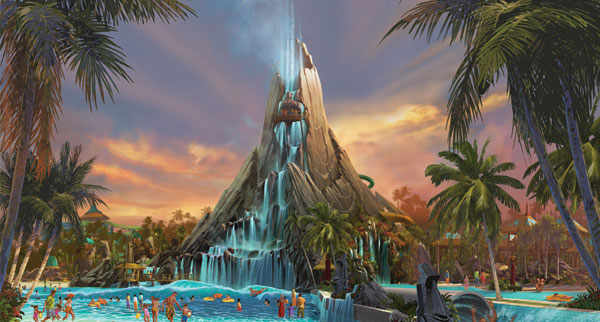 “Volcano Bay is the biggest news for theme parks this year,” says Ross Sinclair, senior product manager for the US, Caribbean and Canada at Travel 2. “Don’t miss out on trying the Ohno Drop Slide, described as a serpentine adventure that ends six feet above the pool below.”

Back at Universal’s existing parks there is further news: a new ‘flying theatre’, seating up to 72, will open on April 6 under the name Race Through New York Starring Jimmy Fallon. Set in New York, it’s themed around the iconic Tonight Show star and will be the first ride to use the Virtual Line system available on the Universal Orlando Resort app (or via kiosks at the ride’s entrance, for those less technologically inclined). A ticket for all three parks costs £242 per adult and £232 per child with Do Something Different.

It’s not the only park ramping things up on the digital front – SeaWorld will welcome Florida’s first virtual reality-enhanced rollercoaster when it updates Kraken, its ocean-themed, open-air coaster, taking riders into the to the depths of the sea with individual headsets that will blast out themed music and visuals. 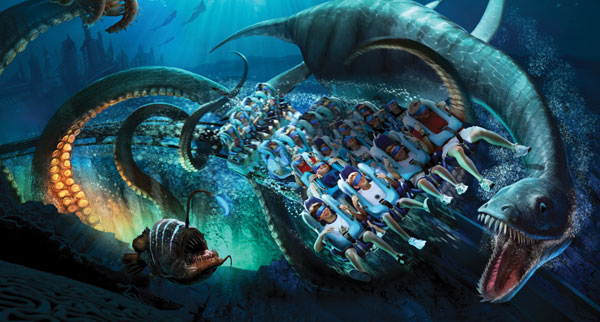 Walt Disney World Resort is embracing the future in a different way with its new Pandora – The World of Avatar section. It is set to bring some added enchantment to Disney’s Animal Kingdom in May with bioluminescent forests, floating mountains and Pandora-themed food alongside two new rides – Avatar Flight of Passage, a jungle-themed attraction high in the sky, and Na’vi River Journey, a family-oriented boat ride along a river in a glowing rainforest.

And, as with Paris, Orlando is running with the Star Wars theme thanks to new full-day guided tours featuring themed food, a dessert party and a VIP viewing of Star Wars: A Galactic Spectacular, as well as various other surprises. 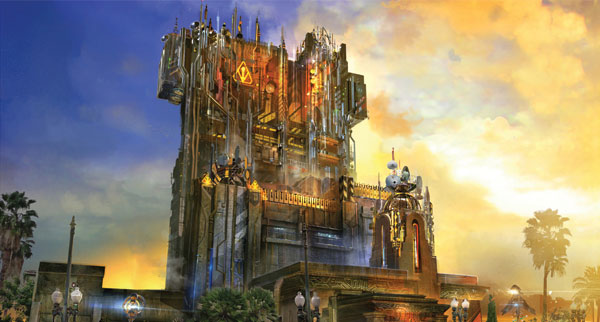 Over in California there’s another space-themed ride coming out. Guardians of the Galaxy – Mission: Breakout is scheduled to open at Disney California Adventure Park in Disneyland Resort on May 27 and features various iconic characters from the comics. Under the same theme, there will be a Dance Off for those wanting to show off their skills, and superhero encounters with the likes of Spider-Man and Captain America.

The bigger parks clearly have lots coming up, but don’t overlook the smaller ones for families on a budget or seeking an alternative experience. Fun Spot America in Kissimmee has a new wooden rollercoaster coming in the summer – with speeds of up to 48.5mph along its rickety tracks – as does Ohio’s Kings Island, whose 3,265ft rollercoaster scheduled for April 15 was named one of the nine most anticipated for 2017 by USA Today. Called Mystic Timbers, the 53mph ride will soar to 109ft and glide through wooded terrain before ending up in a dark shed where a secret feature – being kept a mystery for now – awaits. 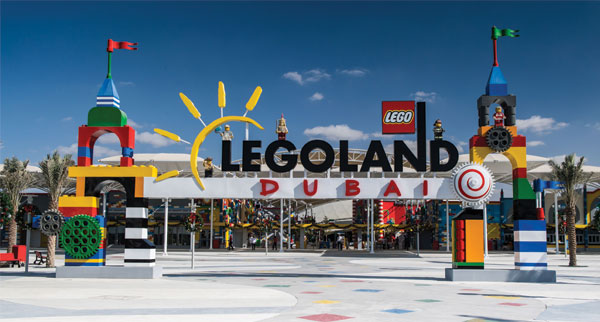 Clients heading to Dubai won’t be short on things to do this year either. Dubai Parks and Resorts opened in December with Legoland, Bollywood Parks – the first Bollywood-inspired theme park in the world – and Motiongate, the biggest Hollywood-themed park in the Middle East. The last features characters from DreamWorks Animation, Sony Pictures Studios and Lionsgate, with everyone from Shrek to the Smurfs represented. A new water rapids ride, Cloudy With a Chance of Meatballs – River Expedition, is due to open next month.

Over at Legoland Dubai there is even bigger news, thanks to the opening of a 250-room hotel where themed rooms, Lego models, a Castle Play Area and ‘disco elevator’ promise to add a certain pizzazz to the usual hotel experience – just in case the fantasy-ensconced parks weren’t enough to get the imaginations whirring. And in 2019, Six Flags Dubai will be opening with plenty of high-speed thrills to satisfy adrenaline-seekers. 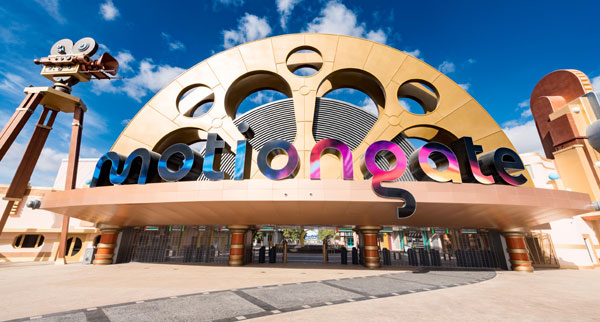 IMG Worlds of Adventure, meanwhile, opened last autumn with rides inspired by Cartoon Network and Marvel superheroes. They are set within four zones, and nine further zones will be joining the fray when IMG Worlds of Legends opens.

There is also plenty going on in the emirate beyond the theme parks. A safari park will open in Al Warqa in the autumn with 10,000 animals, including lions, antelopes and elephants. Visitors will be able to explore ‘villages’ inspired by Arabia, Asia, Africa and the Americas, and plans are in the pipeline for an on-site hotel. Madame Tussauds will soon be making its first foray into the Middle East with celebrities from across the globe featuring in waxwork form – keep your eyes peeled.

Win a trip to Los Angeles

Universal Studios has launched a training module for agents within the Brand USA online training programme. The module will feature updates on the park and its new attractions, alongside tips on how to sell the product to customers. To celebrate the launch, Universal is offering eight agents the chance to win a place on a fam trip to Los Angeles. To enter, complete the module at usadiscoveryprogram.co.uk , book a return flight with Norwegian Airlines to LA and a ticket to Universal Studios Hollywood. Send entries to salesandmarketing@nbcuni.com with your name, agency name and phone number. The draw will take place on April 10.