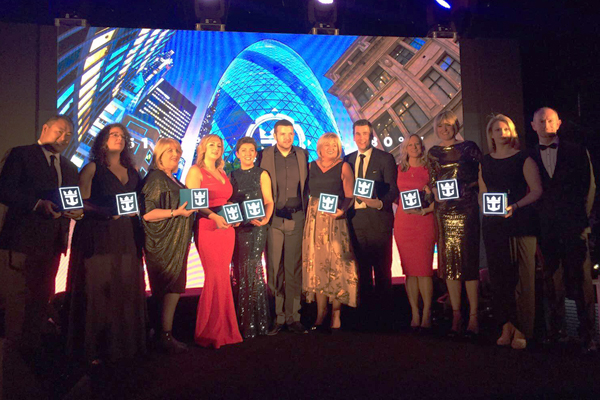 Agent support could help secure new Royal Caribbean ships for the British market, according to the UK managing director.

Ben Bouldin, associate vice president and managing director UK and Ireland, said the consistency and backing of agents was a vital factor in decisions to bring some of the line’s newest vessels to the UK.

Smith said: “With 10 new ship in the next 10 years there is so much opportunity now and in years to come for agents in the UK to have access to Royal Caribbean hardware.”

Bouldin added: “We have got to keep competing to have our share of the market and we will continue to work hand in hand with agents to secure some of the new hardware which comes out in the next 10 years.”

The event at St Mary’s Axe, also known as the Gherkin, was hosted by Glaswegian comedian Kevin Bridges alongside Bouldin.

During the evening awards were given based on performance including Iglu Cruise winning best cruise specialist, Thomas Cook winning for best multiple, World Travel Holdings winning strongest and most consistent growth and Imagine Cruising who won most improved agent of the year.

Two other awards were given based on the recognition of their performance by Royal Caribbean team members.

Bouldin said: “We are now 12,000 members strong and absolutely committed, we are so excited to have hosted our first Club Royal awards, put on by popular demand.

“We have kind of bowed to pressure after quite a few agents said t would be a good idea and I think a lot of them would want to win an award.”