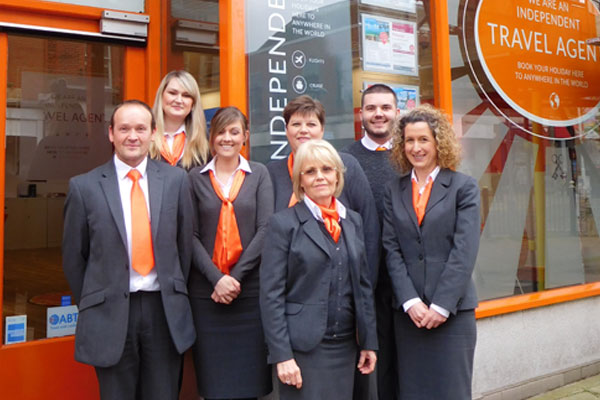 Crosskeys Travel is hard to miss. Its bright orange shop frontage stands out in one of Folkestone’s busy high streets.

And for many people in the Kent harbour town familiar with long-standing family-run coach tour business Crosskeys Coaches, it is instantly recognisable.

“Crosskeys Coaches was getting busier so we needed more staff and bigger premises. I thought I’d just see what was available in the area and I came across this shop that had been standing empty for four years. The plan was to become a one-stop-shop for coach holidays, but people kept coming in asking for flights to New Zealand or holidays to Turkey.”

Two years later, Johnson and his team are running a thriving independent agency in the heart of the town, offering everything from long-haul to London breaks and cruises.

Through his contacts in the coach holiday business, Alan was able to start building up supplier contracts, a process accelerated when shop manager and former Thomas Cook agent Jennifer Kidd joined the business.

“Running a travel agency was new for me so I knew I needed someone that had experience to help the business move forward and grow,” Johnson says. “Jennifer knew what sold locally and got straight in ringing around suppliers and recruiting a shopfloor team from scratch.”

One of her three recruits was former Cook colleague Sarah Goodsell. Between them they have more than 50 years’ experience working as agents. Jennifer says: “I love the travel industry and it’s been great seeing Crosskeys – an operator in its own right – grow into an agency. I haven’t had a day yet where I’m not sat here selling something.

“As an independent there’s a lot more flexibility and the customer service feels a lot more personal. We make our clients tea and coffee and offer the little extras like the door‑to-door pickup service.”

For Sarah too, moving from a big multiple to a small independent has been a big change.

“It’s like going back to the early days of travel,” she says. “I can choose which operators I want to use, and come up with payment plans for my customers.”

Behind the scenes are marketing executive Ioana Bacociu and tour operations manager and former travel agent Miriam Kent, who is responsible for the coach tours programme.

For Alan, staying “truly independent” is a top priority. He says he has spoken to a few consortia, but has not yet been tempted to join one. “I want to stand on my own two feet and sell anything I want,” he says.

Perhaps it’s little wonder when you consider the company’s heritage. The coach business was set up by Alan’s parents 43 years ago. It started out as Johnson’s Mini Buses but changed its name after buying the Crosskeys coach brand from the Tozer family. One of the conditions of the sale was that it retained the name Crosskeys, which is believed to be the regiment Mr Tozer had served in.

Without doubt it is the coach tour operation that has been the platform from which Alan has been able to build his travel agency and it remains a key part of the shop‑side of the business. As well as selling its own coach tours, the agency also offers customers airport transfers, which have an 80% take-up from customers, and once a month one of its orange coaches is stationed in the town centre to promote holidays in the store.

Crosskeys already produces its own coach tour brochure, including ads for other holidays it sells in store; it is looking to partner with Funway Holidays to white-label a dedicated holidays brochure; and Alan says he would like to sell more family holidays.

He also has his sights set on expansion, saying: “I’d like to open another shop in another part of the town, but I want to get this one up and running properly first, so we’ll see what happens.”

Meet two of the Crosskeys team

I used to work at… SeaFrance and then MyFerryLink. When they went bust I knew I wanted to stay in travel so when I saw this vacancy, I applied.

I sell a lot of… Spain, Canary Islands and Fred Olsen cruises.

The best part of my job is… the variety. I’m always amazed at the range of enquiries that come in.

I used to work at… Saga in their call centre. I’d forgotten what it was like to interact with people face to face, so it felt like the right time to branch out into something else.

I sell a lot of… I’ve been learning the systems so far but I’ve sold a few coach tours.

The best part of my job is… Taking on more responsibility and talking to clients in person.

At a time when the big multiples are trimming their store networks it’s always refreshing to hear of a small independent business investing in bricks and mortar.

With a well-known coach business behind it and only one rival in the town (Thomas Cook), Crosskeys Travel owner Alan Johnson grabbed an opportunity – and it seems to be paying off.

The shop itself, a former bank, is smart, spacious and has enough room to grow when the time is right.

As well as the Crosskeys Coaches legacy helping drive footfall, the staff are a huge asset to this agency. It must have been a real coup for owner Alan when he was able to recruit two highly experienced and knowledgeable former Cook agents to really get the business going. And it will be beneficial for the two junior staff, Ryan and Victoria, who can learn from them and hopefully have as long careers in travel as they have had.