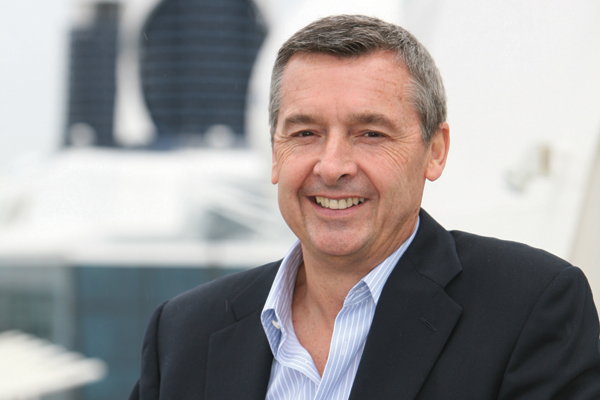 As the operator prepares to launch 10 ships over the next 10 years, its president and chief executive Michael Bayley gives the clearest indication yet that one of the new vessels will serve the UK market. He spoke to Lucy Huxley

On a flying visit to London en route to Shanghai, Michael Bayley says Royal Caribbean International is weighing up where to base its first Quantum Plus ship,
due to enter service in spring 2019, and that the signs are good for the UK.

“The kind of support we are getting from the UK travel trade is very encouraging and really helps us make our deployment decisions,” he says.

“We don’t have to decide where we will deploy our ships for summer 2019 until the beginning of 2018, but let’s just say that if there were a decision barometer, the UK is moving towards the green zone.”

Bayley says the decision has become “a little bit more complicated” since the UK’s vote to leave the EU and the resulting currency fluctuations. “Sales are good, but one of the challenges we face is the devaluation of sterling against the dollar,” he says.

“We are a dollar‑based company, and after Brexit [the value of the pound] dropped by about 15%.

“We have to evaluate what the revenue potential will be in the market, and because we are an international company we can put ships where the potential is best.”

Royal Caribbean is certainly going to be busy. Its next new ship will be Symphony of the Seas, an Oasis-class ship to be launched in 2018. Another Oasis-class ship will follow in 2021 and the first of its Icon-class vessels in 2022.

In between these new ships, Royal Caribbean will launch two enhanced Quantum-class ships, designated in-house as ‘Quantum Plus’ vessels. Quantum Plus 1 is due to set sail in 2019 followed by Quantum Plus 2 in 2020.

Bayley says the first of these will spend its first winter in China and, if it isn’t deployed to the UK, spend the whole summer there as well. But he adds: “Things are looking encouraging for the UK. It is heading in the right direction.”

“We don’t have to decide where we will deploy our ships for summer 2019 until the beginning of 2018, but let’s just say that if there were a decision barometer, the UK is moving towards the green zone.”

Talking about facilities on the new-builds, he says: “We try to design for the future and bring significant innovation to every new class we launch. It’s in our DNA and we believe we’ve had a role in reshaping cruising.”

Bayley admits the new Edge‑class ship being launched by sister brand Celebrity Cruises is keeping Royal on its toes.

“It’s like being in a family where your brother or sister does really well at something, which then spurs you on to do something better. Edge is stunning and beautifully designed for the modern luxury customer, whereas Royal Caribbean is the biggest cruise line in the world with a much broader demographic, appealing to the whole family across multiple generations.

“Our designs need to resonate with the mainstream and offer great value and fun. We don’t take ourselves too seriously.

Bayley refuses to be drawn on what new feature will be on board its newest ship, Symphony of the Seas, due to launch from Barcelona next April, but says: “It will have an Ultimate Abyss like Harmony, but there’s also something new – an experience for kids and the kid in you, something for adventure seekers but in a nice, safe way.”

He says there will be several product enhancements to improve the dining, entertainment and service, adding that all will start to be revealed next month.

“We are super-excited about Symphony. Sales are going gangbusters for the Caribbean – it’s outselling Harmony.”

Bayley says Royal will take UK agents out to Barcelona for the launch, adding: “They will be a mix of new accounts, some of our top sellers and some that have won places through competitions.”

Bayley says he has seen a slight rise in UK guests taking long-haul cruises with Royal in the past year.

“This is really encouraging. If people are looking for something more than just fun in the sun, and if they have sailed with Royal before, then places like Alaska, Singapore, Hong Kong and some of the itineraries out of Australia are really interesting. It shows that people are realising Royal Caribbean is not just about driving to Southampton and getting on a ship to go around the Med.”

Sailings to Cuba have sold well with US guests, he adds, and cruises with a stop in Havana have “outpaced” sales of other short Caribbean cruises by “double digits”.

“We have 40-50 sailings calling into Havana in 2017, starting in April – mostly on Empress of the Seas but also a few on Majesty of the Seas. It’s definitely something guests are interested in, but growth to Cuba will be entirely determined by the development of tourism infrastructure there.”

Royal Caribbean is investing in two big projects to improve its offering in the US and the Caribbean.

The first is a state-of-the art new terminal in Miami, due to open in 2018, allowing Symphony and Allure to homeport in the city.

Bayley says the development means Royal could homeport two ships in Miami, one in Fort Lauderdale and one in Port Canaveral – plus Anthem of the Seas in New York.

He also reveals that Royal Caribbean has just signed a deal with the Bahamian government to further develop its own private island, Coco Cay. The move will see the construction of a pier on the island, big enough to accommodate Royal’s Oasis-class vessels, which will allow guests to walk on and off ships, as opposed to being tendered ashore.

The deal will also see the creation of “a unique and phenomenal vacation experience” on Coco Cay in the form of a massive water park, which, Bayley says, will eclipse any other water park in the world.

“It is going to be the capital city of fun,” he promises.

“It’s located less than a day from Miami or Fort Lauderdale, and guests will have the choice of chill or thrill when they get there.

“You can still have a beach experience. And we will be adding some private cabana accommodation for Suite Class guests who may want to get off and stay for a few days in total luxury and privacy before hopping on another ship to come home – or you can go and have a total thrill adventure. This is another example of our continuous drive to offer an out-of-the-ordinary vacation.”