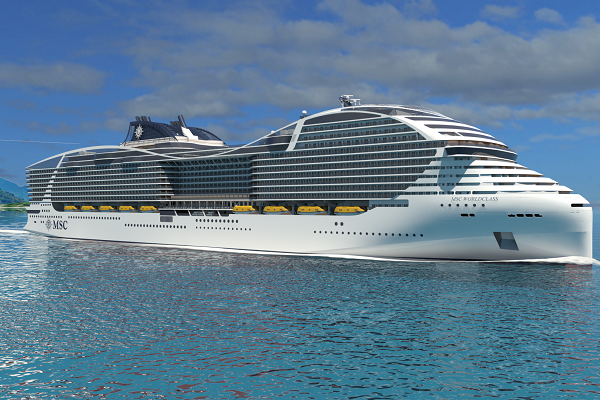 MSC Cruises announced its next four ‘World Class’ ships will be the largest in the world with a passenger capacity of 6,850.

The plans for the liquefied natural gas (LNG) powered ships were revealed at the flag ceremony for its newest ship, Meraviglia in Saint-Nazaire.

The event was attended by French president Emmanuel Macron and minister of the economy Bruno Le Maire.

The ships will be larger for passenger capacity than Royal Caribbean’s Oasis-class ship Symphony of the Seas due to launch next year with 6,780 passengers.

Pierfrancesco Vago, MSC Cruises’ executive chairman said: “Today, as we unveil MSC Meraviglia, a new vessel that marks the start of the next phase of our growth, we are delighted to confirm another key component of our ten-year investment plan: the World Class.

“These new vessels will further expand our partnership with STX France all the way to 2026, with up to seven additional innovative ships to be built during this period.”

The line revealed the World Class ships will be a Y-shape structure to enable panoramic sea views and increase the proportion of balcony cabins.

The ships’ G bow which will be vertically positioned at a 90 degree angle has been designed to improve stability, hydrodynamics as well as to enhance guest comfort.

Other guest features include family-friendly villages, a panoramic aft and a glass pool lounge.

STX France’s chief executive Laurent Castaing said: “Once again, MSC Cruises has chosen to put their trust in our capacity to support their growth and expansion as well as in our ability to conceive, develop and build the world’s most modern and technologically-advanced cruise ships.

“By adding the new World Class to the four previous ship classes that we have delivered over the past 15 years, the number of vessels in their fleet built by STX France in Saint-Nazaire is set to reach 20. Our exceptional industrial partnership continues to benefit an entire region.”