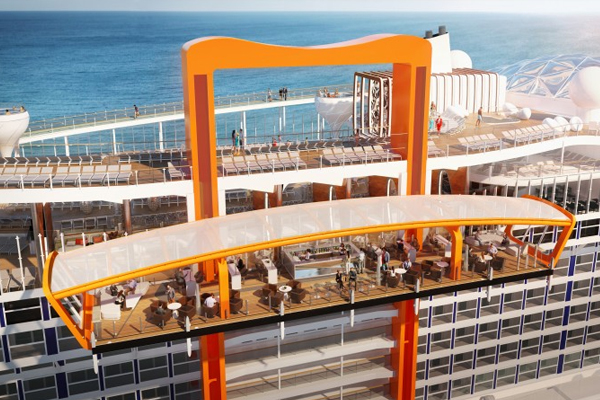 The ceremonial keel laying for the vessel took place in Saint-Nazaire, setting the foundation for the ship’s innovative new structure.

A 875-ton block was lifted in the air and a lucky coin was placed in the dock before the block was lowered into position.

With the solid foundation in place, the building blocks can be joined together to create the ship of the future.

Leaders from both Celebrity Cruises and STX France attended the event to celebrate the next stage of the ship’s evolution.

The 2,918-passenger Celebrity Edge is to be based in Fort Lauderdale, Florida, making its first sailing on December 16, 2018.

First details of the new class of ship, including a platform that climbs up and down the side of the vessel and cabins designed in partnership with British interior designer Kelly Hoppen, were released in March.

A second vessel in the series, Celebrity Beyond, is due to be added in 2020 while third and fourth Edge-class ships are planned for autumn 2021 and 2022.