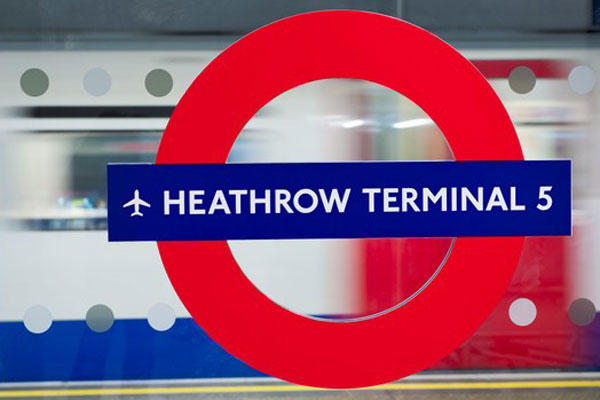 Improved rail access to Heathrow is being promised with the addition of two new Elizabeth line trains an hour serving Terminal 5 from December 2019.

Under the plan, services to Heathrow will increase from 18 trains an hour to at least 22 in 2019, of which six will be on the new Elizabeth line.

A train will depart central London to Heathrow on average every two-and-a-half minutes – including two Elizabeth line trains an hour to Terminal 5.

Journey times to Heathrow from Bond Street will be 27 minutes, Liverpool Street 35 minutes and Canary Wharf will be 39 minutes away on a direct train.

An interchange at Old Oak Common in north-west London will connect High Speed 2 to Heathrow via the Elizabeth line in less than 20 minutes from 2026.

Heathrow Express services from Paddington will continue to run every 15 minutes, giving a 15-minute connection between Heathrow and central London.

New ticket readers are being installed at Heathrow from May 2018, meaning passengers using Heathrow Express and TfL services between Paddington and Heathrow will be able to use pay as you go Oyster or a contactless device.

Passengers travelling on the Heathrow Express will benefit from easier on-the-day ticketing and can still purchase tickets in advance online with prices leading in at £5.50.

The initiative will support Heathrow’s plans to ensure that half of all journeys to and from the airport are by electric or low-emission public transport by 2030.

Heathrow chief executive, John Holland-Kaye, said: “This agreement is a big step forward. Together Heathrow, TfL and the DfT are working together to boost rail connections to the UK’s hub, giving our passengers more choices to travel sustainably between Heathrow and London.

“With 22 trains per hour, an ambition to add even more services and easy to use Oyster and contactless ticketing, Heathrow will be at the heart of an integrated transport network and our passengers will reap the benefits.”

London’s Transport Commissioner Mike Brown added: “We have been working with Heathrow on how we can deliver the best services for customers to and from the airport. It is great news that we can now confirm that the Elizabeth line will serve all the Terminals.”

Rail services to Heathrow from December 2019: