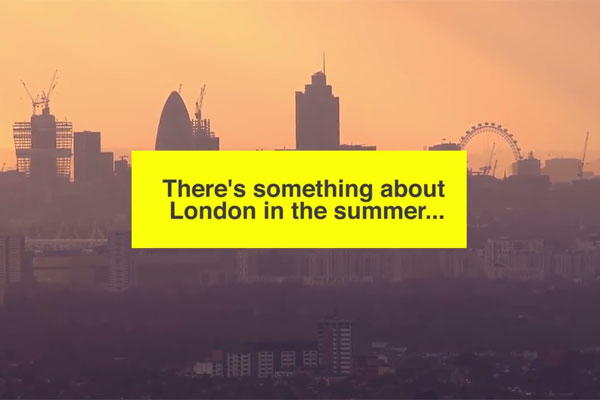 A #LondonisOpen campaign featuring stars such as Jenson Button and The Kaiser Chiefs is being initiated to promote the capital to tourists this summer.

Mayor Sadiq Khan has launched the ‘London is Open for Summer’ promotion to reassure visitors to the city that the capital remains open to all with a diverse range of events and attractions for everyone to enjoy.

It includes a 50-second video including sport, music and entertainment celebrities.

Celebrities are captured on camera lending their support to celebrate London as one of the world’s most international and diverse cities and discussing what they love about the city in the summer.

Latest tourism booking analysis shows that international arrivals in London are set to be up 14% on last year, from July to October.

The great value offered by the city due to the weakness of the pound has seen bookings for arrivals from the US up 21% and Asia Pacific 14% over the same period.

This follows a record 4.5 million overseas tourists visiting London in the first quarter of the year.

Khan said: “London is the greatest city on earth and there is nowhere better to spend time this summer. Every corner of the city is bursting with life and colour – whether you’re planning a visit to one of our top tourist attractions and world-class museums, enjoying one of the capital’s major sporting or cultural spectacles or simply taking a walk around our beautiful parks and green spaces.

“For me, the unique buzz of London in the summer shows the city at its very best. I’m saying loud and clear – London is open for business and open to everyone this summer.”

Laura Citron, chief executive of London & Partners, which runs visitlondon.com, said: “I’m proud that Londoners are coming together to show that #LondonIsOpen for summer.

“Visitors are such an important part of what makes London a fantastic place to be, so we’re looking forward to welcoming record numbers this summer.

“Visitlondon.com has an abundance of ideas and offers for everyone to make the most of their summer in London.”

London is open for business and open to everyone this summer #Londonisopen@visitlondon@mayoroflondon#london#summerpic.twitter.com/qreDcniasR