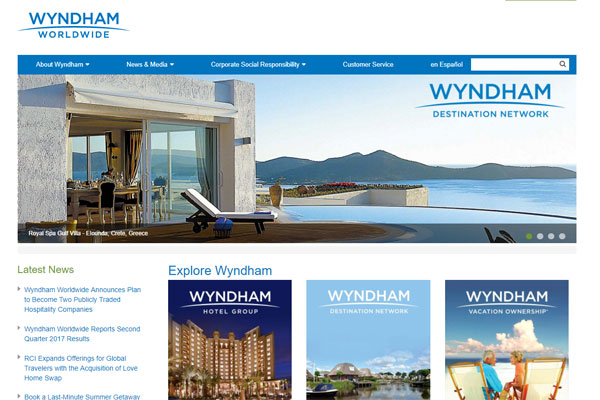 It will be joined with Wyndham Destination Network, parent of RCI, the world’s largest timeshare exchange company.

The company announced it will also explore strategic alternatives for its European rental brands.

The corporate names of the post-spin public companies have not yet been decided.

Wyndham said the split will allow each separately traded entity to “maintain a sharper focus on its core business and growth opportunities, facilitate future capital raising, and make the changes necessary to respond to developments in its markets”.

Stephen P. Holmes, chairman and chief executive of Wyndham Worldwide, said: “After a comprehensive review process, the board of directors has determined that a spin-off of the hotel business and the combination of Wyndham Vacation Ownership with RCI is the best structure to unlock shareholder value and enable strong growth across the businesses.

“We will work with the leadership of our European rental organisations, which have outstanding brands in their regional markets, to explore options to fully realize their future growth potential.”

Holmes added: “Over the past decade, we have attracted incredible teams of dedicated professionals who have built these businesses and brands into industry leaders which are now connected by the industry’s top rated loyalty program.

“With this strong platform in place, our businesses are now able to move forward individually, each positioned for a very strong future, based on a shared history and culture and an ongoing affiliation with Wyndham Rewards.”

The transaction to be completed in the first half of 2018.

As two separate public companies, the vacation ownership company and the hotel company will have separate boards of directors.  Holmes will serve as non-executive chairman of the board of directors for both companies.

Gail Mandel, chief executive of Wyndham Destination Network, will continue to lead that business through the transition, and Tom Conforti, chief finance officer of Wyndham Worldwide, will move into an advisory role.

Holmes said: “Tom has worked closely with the board and me to get to our announcement today.

“He has been a passionate leader for our business and a vocal champion of our culture and values.

His contributions to the company and for our shareholders are significant, and our gratitude to him runs deep.

“As we begin this next chapter, Tom and I agreed that now is a good time to make this change to support a seamless transition to the leadership of the new companies.”

Wyndham owns a number of brands well-known to the UK trade including Hoseasons, James Villa Holidays and Novasol. This week it announced the acquisition of holiday home sharing website Love Home Swap.