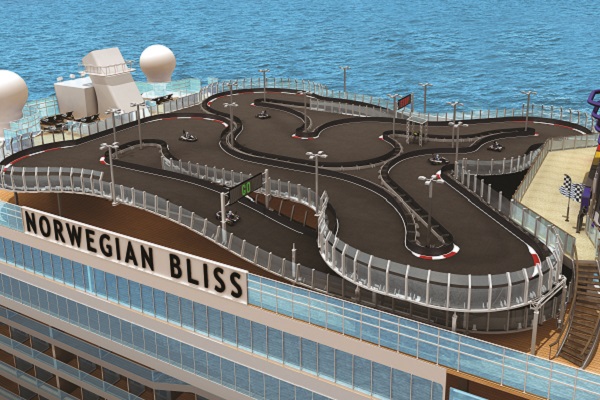 The competitive track, the longest at sea at nearly 1,000 feet, will enable users to compete against each other at speeds of up to 30mph.

The vehicles will be set with speed settings to accommodate novice, intermediate and advanced drivers, with a special ‘turbo boost’ available on each lap.

The electric cars run silent so as to not disturb those seeking to enjoy the serene environment.

The 4,000-passenger ship’s Aqua Park includes two multi-story waterslides. One free fall slide includes two loops, one that extends out over the side of the ship and a second see-through loop that stretches down to the deck below.

A tandem slide allows passengers to race side-by-side on inner tubes for more than 360 feet, with a translucent section that provides ocean views.

Details of the line’s 16th ship, which will sail to Alaska and the Caribbean with select voyages to the Mexican Riviera from June 2018, were unveiled in Las Vegas by president and CEO Andy Stuart.

The 167,800-ton vessel is being constructed at the Meyer Werft shipyard in Papenburg, Germany and is due for delivery next spring.

The ship’s itinerary from Seattle will include calls in Ketchikan, Juneau, Skagway and Victoria, British Columbia, along with scenic glacier cruising.

Stuart said: “Norwegian Bliss will no doubt be our most incredible ship to date.

“We have elevated Norwegian Bliss’s on board experience to new heights, bringing the best features from across our fleet plus exciting new first-at-sea activities like the largest race track and new dining concepts to create the ultimate cruising experience.”