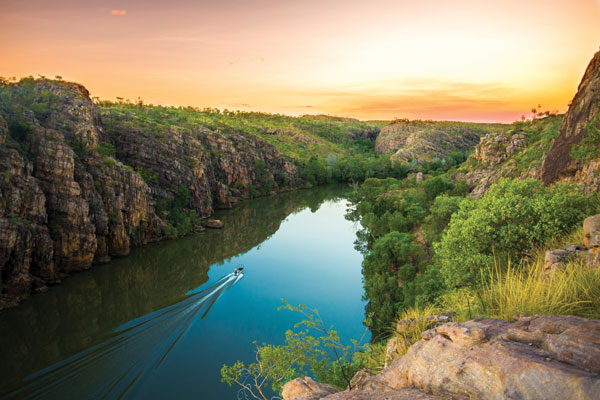 The first-timer to Australia tends to stick to the big cities, beaches and reef along the east coast. It gives a glorious sense of a modern and beautiful country, while barely touching on the vast continent that it is tacked onto.

Head back a second time, and the Top End of the Northern Territory provides something radically different. Darwin, the Northern Territory capital, is an isolated but surprisingly buzzing outpost butting onto the Timor Sea. It does a nice line in hippy-vibe sunset markets, Second World War history and boat cruises, but its key role is as a launching pad for exploring the untamed Top End.

The largely uninhabited savannahs, wetlands, floodplains and stone escarpments that lie beyond can easily be worked into a self-drive loop – although this is best done between May and November, when roads are less likely to be closed due to flooding. And with four days to spare, such a loop might look a little something like this.

See: Big teeth, up close, is the name of the game on the Adelaide River. Like most rivers in the area, the Adelaide is heaving with saltwater crocodiles, many more than four metres long, and all quite willing to eat anything that falls into the water.

Several operators have licences to run croc-spotting cruises along the river, where they dangle meat over the edge of the boat and watch the crocs jump up to grab it. This is perfectly natural behaviour – they do the same to catch birds on overhanging branches – but it’s an awesome sight and a great opportunity to see just how terrifying these predators are up close. Adelaide River Cruises offers one such boat trip from $45, or along the river a stretch, the Spectacular Jumping Crocodile Cruise is $40.

From there, the road into Litchfield National Park stops at Wangi Falls, where twin waterfalls pour into a tremendously inviting swimming hole. Provided it’s the dry season and the rangers have ensured any interloping crocs have gone.

The Buley Rockholes, further along, provide guaranteed croc-free swims in a series of pools as a creek tumbles down an escarpment. The final major sights are the weird and wonderful termite mounds, up to five metres high, which pockmark the horizon at the southern end of the park.

Stay: Nearby Batchelor is the best place to stay the night, with accommodation mainly in caravan-focused holiday parks or the uninspiring but perfectly decent Litchfield Motel, from £86.
litchfieldmotel.com.au

See: Nitmiluk is the national park surrounding the slightly misnamed Katherine Gorge. In fact, it’s a series of 13 gorges along the Katherine River, some of which are separated by waterfalls and rapids, but all have steep sandstone walls. There are several ways to explore this evocative ancient landscape, of which the most common is a cruise. Nitmiluk Tours offers two and three-gorge cruises for $89 and $129 respectively. But the indigenous-owned company also throws in some more adventurous options, such as canoeing trips and helicopter flights, for something a bit different.
nitmiluktours.com.au

Stay: In the nearby town of Katherine, the Knotts Crossing Resort has a formidable pool and restaurant, with rooms costing from £74.
knottscrossing.com.au

See: Litchfield and Nitmiluk are mere appetisers for the Top End’s big boy, Kakadu National Park. Kakadu covers an entire river system, and offers a deeply complex network of landscapes that range from monsoon forests in the stone country to the flat, bird-filled wetlands. It’s not a place with a single, immediate highlight, but a slowly seductive and alien world.

Some major attractions – especially the waterfalls – are on tracks that can be accessed only by 4×4, but others are handily along the Kakadu and Arnhem highways. These include the Yellow Water Billabong at Cooinda, where nature-focused cruises (from $72) head out several times a day. The crocodiles are again the highlight, but there’s a lot more to it. Drifting through giant lily pads and forests of paperbark trees is spellbinding, and twitchers will have hundreds of bird species to keep an eye out for.
kakadutourism.com

Further along the Kakadu Highway is Nourlangie, where rock art from thousands of years ago can be found on walls and cave shelters. Explanatory signs show what to look for, give brief overviews of the stories depicted and provide pointers on how to tell how old the art is. It’s pretty safe to say, for example, that any figure holding a gun was painted in the past 200 years.

Stay: Not far down the road is Jabiru, which is Kakadu’s main settlement, although it’s basically a service village. It is home to the Mercure Kakadu Crocodile Hotel (rooms from $169) which has the novelty value of being shaped like a giant crocodile.
mercure.com

See: Jabiru is also home to the

Bowali Visitor Centre, which makes a good fist of explaining the different landscapes of Kakadu, as well as giving an indigenous perspective on it. Here’s where to learn what sets the six seasons apart (the often-used ‘wet’ and ‘dry’ seasons are an oversimplification), and discover how traditional practices such as management via fire have been incorporated in to the present day.

Also nearby, closer to the East Alligator River that divides Kakadu from Arnhem Land, is Ubirr. This is an outcrop of the imposing Arnhem Land escarpment, and is home to several rock-art sites. The sweaty climb to the top also affords jaw-dropping views over the floodplains.

On the way back to Darwin, the Mamukala Wetlands has a big viewing hide, plus plenty of literature about the flora and fauna that call Kakadu home. These include the paperbark trees that are a sure sign of water – they need ‘wet feet’ – and the big magpie geese that hang around in groups of one male, two female. They’ll bring the young up together as a group, irrespective of who the mother is. Things are a little different in these parts.

How to book it

Thanks to good flight connections to Darwin from other Australian cities, it’s easy to package the Top End into a wider Australian trip, and there are several multi-day tour options that take in the star attractions.

Anzcro puts together a six-day self-drive package starting at £928. This includes one free day in Darwin, and builds in extra time in Katherine to investigate how outback life works at the School of the Air. Here you can sit in on school lessons conducted over the radio to children in remote outback stations. The trip also offers the option of going to Litchfield National Park, or heading to the Tiwi Islands just north of Darwin instead. The latter is a good spot for indigenous cultural experiences.

Then there are guided affairs, for those who don’t fancy taking on the drive themselves. APT matches the Top End with the wilds of Western Australia on its Kimberley, Kakadu and Arnhem Land Explorer, a small-group four-wheel-drive tour that starts at £7,795 for 17 days. The itinerary takes in Darwin, Ubirr, Arnhem Land, Nourlangie and Katherine Gorge, before crossing to the west for adventures around Lake Argyle, Purnululu National Park, El Questro Wilderness Park and Mitchell Falls, finishing in Broome.

For something altogether more independent, local operator Venture North Safaris runs a five-day four-wheel-drive mission through Kakadu, into Arnhem Land and up to the ultra-remote Cobourg Peninsula. The safari-style tented camp up there provides the accommodation for three nights, and experiences include fishing at Port Essington, an Aboriginal-guided rock-art tour in Arnhem Land, a visit to the ruins of an abandoned British colony and hunting for mud crabs. It costs $3,290 per person, including all meals.