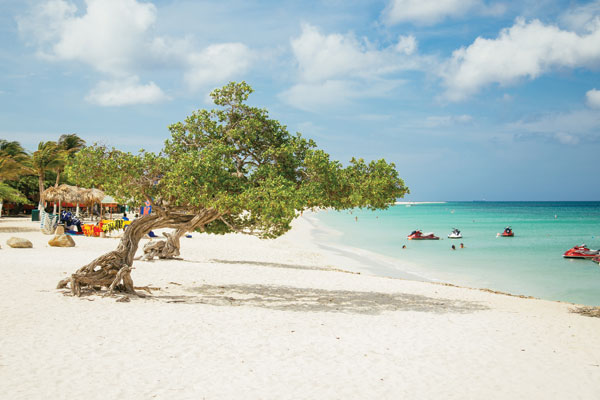 It’s a good thing Pinto knows where he’s going. Setting off from the rather ominously named Rancho Notorious, the chestnut-and-blond piebald horse picks his way expertly along the stony ground, while I focus all my efforts on not falling off.

In fact, I’m concentrating so hard on just staying in the saddle, that I barely notice the landscape shift – gone are the big boulders and even the slightest hint of green, and suddenly we’re in wide open plains that would
look more at home in the Wild West or some vast Argentinian estancia, than a beach-fringed Caribbean island.

The air is gritty with dust, and there’s nothing but the sound of the horses’ hooves against the ground as we plod along, single file, behind our guide Nestor ‘The Cowboy’ Mendoza.

Then the breeze picks up, carrying the sound of waves crashing in the distance, before the desert gives way to the sight of water, and we’re riding parallel to the shore, pulling up at secluded bay Boca di Pos di Nord. Now this is the Aruba I was expecting.

Our half-day horse riding trip takes us past the terracotta-roofed Alto Vista Chapel, where Aruba’s first church was built in 1750, but it’s the vast, arid landscapes that stay in the mind, proving this is no ordinary island.

It has all the beautiful golden sands you’d expect of the Caribbean – from Baby Beach with its inches-deep shallow waters, to Flamingo Beach, which comes with a resident flock – but this is also an island that devotes a fifth of its land to the wilds of Arikok National Park.

With nearly 50 miles of hiking trails and seven species of cacti, the park feels a world away from the coast, although it does boast lofty lookout Miramar, where it’s possible to see the sea in both directions.

Guests must pay a conservation fee of $11 on entry, and can reserve a free guided hike if they book at least a day ahead.
Nature rules the roost here – look for the bright blue flash of an Aruban whiptail lizard, or the slithering body of an Aruban cat-eyed snake, both endemic species – but the park also bears the telltale signs of Aruba’s past gold mining industry.

When gold was first discovered in 1824, it might have seemed Aruba’s fortune was just around the corner, but nearly a century of digging uncovered barely 200kg of the shiny stuff, and mining wound down at the outbreak of the First World War, never to be resumed.

After that, Aruba struck a different kind of gold, becoming a centre of the oil refining industry thanks to deep ports that could accommodate larger ships. But it was the opening of Aruba’s first hotel, now the Hilton Aruba Caribbean Resort, in 1959 that was really the goldmine; since the oil refinery shut its doors in 2012, tourism has accounted for about 80% of the island’s economy.

To put all that in perspective, suggest a short visit to the Museum of Industry in San Nicolas ($5). This thoroughly engaging exhibition offers a potted history, with absorbing videos of islanders telling their stories in their own words.

If that whets the appetite for Aruba’s heritage, it’s also worth a stop at Aruba Aloe, a 150-acre plantation with thousands of the spiky plants. Since they were imported from Africa in the 1840s, Aruba has been a key centre of cultivation. Guests can tour the plantation to see some of its 80 employees at work, hand-making and labelling everything from soap and shampoo to harvesting the gel inside each leaf for superfood smoothies.

The Aruba Ariba cocktails on board De Palm Tours’ afternoon catamaran cruise aren’t nearly as good for you, but they are a tasty take on a classic Caribbean rum punch.

It’s worth tearing yourself away from the open bar, however, for a spot of snorkelling in the gloriously warm waters of Boca Catalina. Expect bright blue parrotfish, charcoal-grey French angelfish and long, narrow trumpetfish darting in and out of giant tube sponges or past gnarled globes of brain coral. The water is so clear you can see huge shoals of minnows buffeted back and forth with the currents, moving as one like well-choreographed dancers, until bigger fish appear and throw it all into chaos.

The next stop reveals a different underwater attraction: the wreck of the German warship Antilla, scuttled just offshore in 1940.

The Palm Pleasure Afternoon Delight costs $69 for adults and $52 for children, with morning and sunset cruises also available.

Also teeming with rich marine life is the barrier reef at Mangel Halto, where donning a snorkel and fins will open your eyes to an abundance of activity below the surface. And the catch? You’ll have to work a bit harder to get there.

Instead of cruising on a catamaran, this can be part of a kayaking tour, paddling a little over a mile along the coast. The currents are gentle and the water fairly shallow, so even the least confident kayaker will still have time to sit back and enjoy the scenery. The half-day tour from Aruba Kayak Adventures includes lunch and pick-up, for $83.

Aruba doesn’t do big cities – even its capital Oranjestad has fewer than 30,000 people – but its urban areas are still worth exploring. Cruise passengers arriving at the port can catch the free trolley-car – though it’s only a few minutes’ walk – to go shopping along Wilhelminastraat or see its Dutch Colonial Revival architecture up-close. Painted in pastel shades accented with elaborately curved eaves and bright white curlicues, these ornate frontages are quite the contrast to the designer brands – think Louis Vuitton, Cartier and Gucci among them – that line the streets of the nearby Renaissance Mall. Even the town hall is a colourful affair, painted emerald green with white shutters.

The aesthetics of second city San Nicolas are just as eye-catching – but in an altogether edgier way. The street art murals that brighten up the walls around this district are unquestionably cool and make easy Instagram pickings. Follow it with a drink at Charlie’s Bar – a tiny pub where the ceilings, walls and every bit of available space heave with kitsch artefacts from the island and mementos left behind by barflies over the years.

So if guests want nothing but beaches and bars, they won’t go far wrong in Aruba, which ticks every Caribbean box and more. But sprinkle in some of its natural beauty, fine food scene, and a bit of that all-important wild side, and guests will see why the official motto, printed on every car number plate, calls this ‘one happy island’.

Thomson offers seven nights at the Divi Aruba All Inclusive from £1,131, including direct flights from Gatwick and transfers, based on an October 17 departure.
thomson.co.uk

Funway Holidays offers a week at the Hilton Aruba Caribbean Resort & Spa, from £1,950 including flights from London with Delta Airways, departing January 12, 2018.
funway4agents.co.uk

Eat
Dine on first-class food and drink in beautiful beachfront views at Barefoot Restaurant, where diners eat with sand between their toes.

Relax
Take a spa treatment in one of the beachfront huts at Spa del Sol, part of Manchebo Beach Resort.

Taking its name from the distinctive divi-divi tree or watapana – an icon of the island thanks to its bent-over shape – this large-scale resort occupies a plum spot on the west coast, with a long stretch of beach shared with sister property Tamarijn Aruba.

It’s a popular mid-range option with British guests in search of a laidback escape, and serves the market well with premium-brand spirits stocked at the bar, most à la carte restaurants included (reservations needed), and plenty of poolside and beachfront spots if all guests want to do is set up on a sunlounger for the day.

Rooms are well appointed, albeit occasionally lacking in attention to detail, and the buffet restaurant serves simple, familiar fare. There were plenty of families with kids of varying ages, plus a golf course and water sports on-site for anyone who needs to work off some of those extra all-inclusive inches.
diviaruba.com