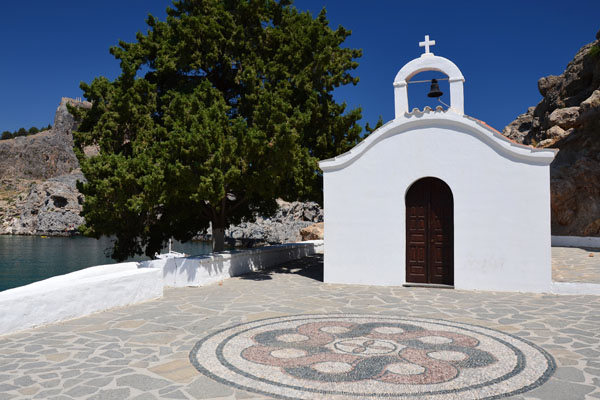 A Greek monastery in Rhodes has banned all foreign weddings from next year after a British couple were pictured appearing to perform a sex act on a holy site.

The picture of Matthew Lunn, 27, and his wife Carly, 34, from Birmingham, taken by a family member went viral after it was posted onto Facebook following their ceremony at the Greek Orthodox monastery.

Kyrillos of Rhodes, the island’s top bishop, promptly decided to ban all foreign weddings at the monastery of St Paul, from 2018.

His decision has forced hundreds of British couples to look elsewhere and cancel their dream weddings.

Giorgos Eleftheriou, president of the local Lindos community in Rhodes, told The Times: “We are Greek and we cherish our traditions and the sanctity of our religious sites. We cannot allow this disgusting behaviour to prevail.

“I have hundreds of soon-to-be brides from Britain and all over the world calling me today in tears because of this decision.

“Shame on those two for the damage they have done. Would they have done the same in their homeland; in front of a British chapel, a Jewish temple, a Muslim mosque?”

Carly told The Sun that she and her new husband never expected the photo “to be as popular as it was”.

She said: “It was something we said we’d do for a joke.”

Suzanne Sharples, 33, from Crawley, Lancashire, had splashed out nearly £50,000 to get married at the monastery next May.

She told Travel Weekly how the actions of the Lunns had left her “absolutely gutted”.

“I chose Rhodes because of the monastery – nowhere else is quite like it,” she said. “All 52 guests have booked the trip.

“I just think the Lunns have totally ruined it for everyone else. They have had their dream wedding – but now no one else can.

“I have been up all night looking at places but there is nowhere else which appeals to me.”

Tracie Jayne Flynn was in the process of trying to book a wedding on the island next year for a friend.

On Facebook, she wrote: “It’s very sad, so many couples day ruined because of two very silly people who obviously do not realise how seriously the Greek people respect their holy sites.”

Mathilde Robert has organised weddings on Rhodes for British clients for more than 20 years.

She believes the actions of the Lunns could affect “hundreds” of couples.

She said: “The indecent behaviour of one couple may cause the unhappiness of hundreds and dent the wedding market to Rhodes. This is tragic.

“We have never had any issues with the thousands of couples whose weddings we have organised and are gutted by this news.

“We understand and respect why Bishop Kyrillos has taken this view and appreciate that Mr Eleftheriou will engage in dialogue to find a way to hopefully say – this was a regrettable, one off incident.”

Have you been affected by the ban? Email harry.kemble@travelweekly.co.uk