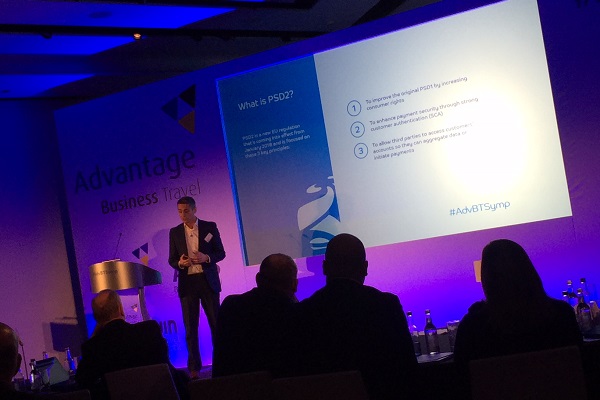 Travel agents should ensure they are not overpaying for credit card transactions ahead of the impending ban on card payment surcharges, an expert from Barclaycard has warned.

Speaking at The Advantage Business Travel Symposium on Monday, Ross Cooper, TMC business development manager at Barclaycard, warned members that the charges were “just around the corner”.

He explained that the ‘interchange’ [fee] businesses, such as travel agents and travel management companies, are obliged to pay their ‘merchant acquirers’ (typically their bank) for transactions on consumer credit cards has already been heavily reduced – from around 2% to around 0.2% – around 18 months ago.

Depending on the bank businesses use, the onus may be on them as the merchant to make sure their charges for the processing of credit card transactions are reduced. Ensuring the lower charges would not stop an agency having pay, but could significantly reduce the cost. When the Payment Services Directive II (PSD2) is introduced, consumers will not pay any fee to use their credit of debit card.

“A lot of merchants haven’t seen a reduction in their costs based on the changing of regulation already,” Cooper added. “For any consumer card charges you should be making sure you are paying the right amount.”

His statements mean that those agencies that have already seen a reduction in the amount they pay to process a card transaction, and continue to charge a fee, are in effect making a profit on the fees.

“It’s already a lot cheaper for an issuer or a merchant to take a credit card payment,” Cooper said. “But that’s not necessarily all been passed on to the consumer.”

Ken McLeod, director of industry affairs at the Advantage Travel Partnership, said agencies were struggling to find ways to offset the cost of the ban on credit card surcharges, which comes into effect in January.

He told Travel Weekly: “If you are an agent, you can charge a fee. But you can’t charge a fee to one customer because of their method of payment. You’d have to charge all your customers a booking fee or service charge, which is a challenge because they won’t want to lose their competitive edge.

McLeod said agencies would be reluctant to introduce a blanket charge to regular customers and those who don’t use credit or debit cards, adding: “We are going to find that a lot of these charges are going to have to be absorbed. It’s a real pressure point for agencies.

“I would say that 90% of leisure agencies will probably never charge a fee for booking.”

Instead, he said, agents would have to try and sell more ancillaries to stomach the cost or look to try and move customers towards a bank transfer method, although he accepted that would be another hurdle in the sales process.

Smaller agencies, such as Advantage’s members, may decide follow the lead of bigger multiples to see how they absorb the extra layout, McLeod added.