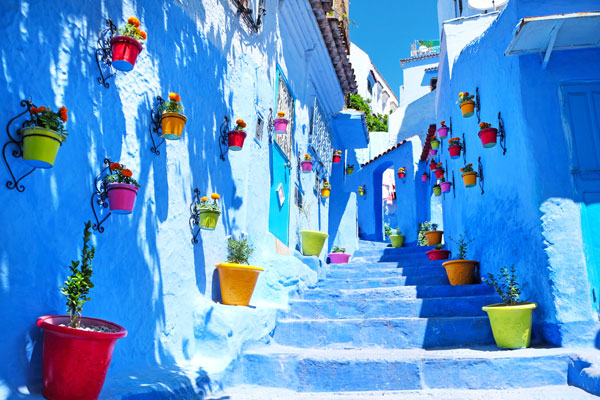 Morocco’s Tamouda Bay is a world away from Marrakech, discovers Laura French.

Waves crash onto an empty, sandy shore as the wind whistles in my ears. I feel like I’m at the end of the world, stumbling upon a semi-secret gem in the middle of beautiful nowhere.

I’m staying at Tamouda Bay, the site of a new development on Morocco’s northeast coast. If you haven’t yet heard of this place, it’s time to get Googling.

Set on the Cap Nord on a long stretch of Mediterranean coastline, this quiet, sandy bay has been a popular spot for Moroccans for several years – the king holidays here every year, I’m told – but until recently it’s remained something of a secret to the UK market.

Now a wave of new hotels along the beachfront is set to change that. Last September, Banyan Tree moved in with a sprawling, elegant 92-villa resort, following hot on the heels of the Sofitel, while a Ritz-Carlton and JW Marriott are set to join the fray soon too.

It’s easy to see why; a long beach makes Tamouda a fresh alternative to the likes of Essaouira and Agadir, while a smattering of historic cities in the area means it’s an appealing option for those wanting a cultural trip without the tourist crowds of Marrakech.

Around the resort area itself are water sports, kids’ play areas and restaurants – some a little dilapidated, but likely to be freshened up as tourism here grows. And it’s all easily accessible, thanks to direct, twice-weekly Air Arabia flights from Gatwick to Tangier which whizz Brits over in around three hours with zero time difference. 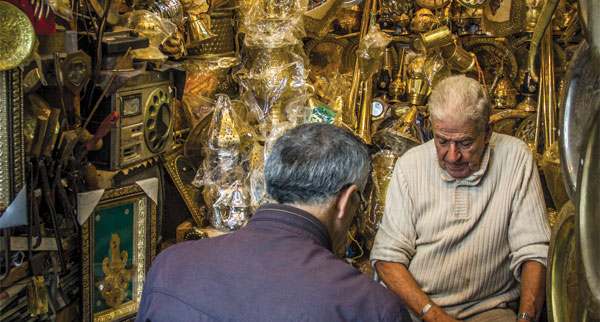 Home to an ancient city founded by the Berbers in the third century BC, the Tamouda region has a rich history that fuses Roman, Spanish and Moorish influences.

At the centre of that lies Tétouan, once the capital of Spanish Morocco and a major trading base between the two countries. Exiled Muslims and Jews came to the city from Andalusia in the 16th century, and today a string of colonial buildings wrap themselves around a historic walled medina, a Unesco World Heritage Site known as the ‘White Dove’ thanks to its iconic white-washed houses.

Wandering through its narrow, stone-paved backstreets during the weekly Sunday market gave me a glimpse into Morocco at its most authentic and traditional. Think overpowering smells of freshly-tanned leather (produced using pigeon droppings, apparently); plucked chickens hanging upside down; and local women selling fragrant herbs and Moroccan sweets from the side of the road. One turn takes us to a chicken slaughterhouse, another down an alley of gold, where extravagant, bejewelled belts and necklaces fill tiny, packed-in shops. It’s certainly in your face, but for clients after a taste of local life, this is the real deal.

“A long beach makes Tamouda Bay a fresh alternative to the likes of Essaouira and Agadir.” 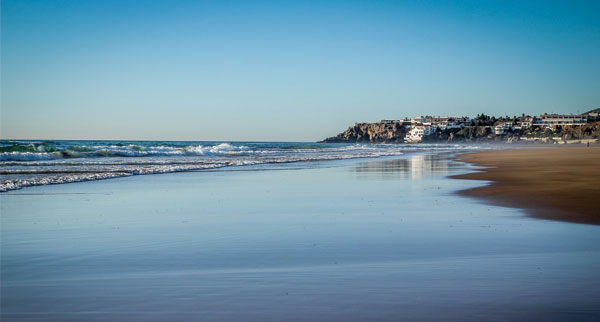 Architecturally the area is intriguing. Slightly dishevelled buildings in shades of purple, green, white and blue make it look like someone got trigger-happy with the paintbrush, while 400-year‑old buildings such as the restored Khalifa Palace and the intriguing Archaeological Museum welcome visitors wanting to get cultural. Despite all this, tourists remain few and far between, giving it appeal for those wanting to get a little off the usual track.

The food here also happens to be exceptional. Recommend restaurant El Reducto for delicious, cinnamon-infused pastries, piles of couscous doused in sweet, caramelised sultanas, and tagine filled with beef so tender it falls apart at the touch of a fork.

Queen of the region, though, is the city of Chefchaouen, which glows from the Rif Mountains in a striking vision of blue. Here houses, walls, streets, steps and doorways are all painted in various shades of the colour, so that it feels a bit like Disneyland and you can’t help but stroll around with a smile on your face. Formerly a Moorish fortress for exiles, today Chefchaouen is a blend of Islamic and Jewish influences, where Berbers in colourful cloaks stroll the streets.

There are various tales behind the city’s vivid blue hue. Jewish beliefs held that tinting thread with tekhelel dye would remind visitors of God’s power; our guide told us it was chosen to ward off mosquitoes. Whatever the reason, it’s pleasingly refreshing. 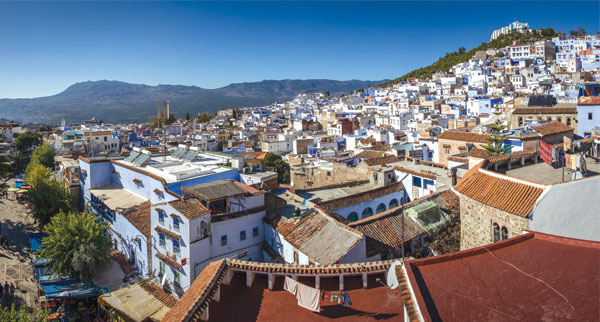 The city has its own historic medina as well as an ancient kasbah (restored fortress), where you’ll find a tiny art gallery and ethnographic museum. Although the city attracts more tourists than Tétouan, the winding, hilly streets are calmer, quieter and cleaner, with Moroccan rugs, leather goods and loaves of freshly baked khobz bread (the local staple food) spilling out from hole-in-the-wall shops.

And getting there was just as memorable, with scenes of picturesque mountains, spindly pine trees and surprisingly green, rolling hills playing out through the windows – a far cry from the arid, desert‑like Morocco I’d imagined.

Beyond the bounds of these two tourist cities, there’s Tangier itself, once the ‘pearl of Morocco’, luring in eccentric travellers, artists and writers such as Samuel Beckett with its somewhat seedy reputation.

It suffered a period of neglect under Morocco’s former king but has since undergone a revival, with renovated galleries, hotels and high-end restaurants popping up in its legend-steeped centre – and drawing in the likes of Daniel Craig, who filmed part of Bond film Spectre here.

Around Tangier there are villages such as Al Bayen, where visitors can hike in the verdant Rif mountains and learn more about the Jebala people who live there. 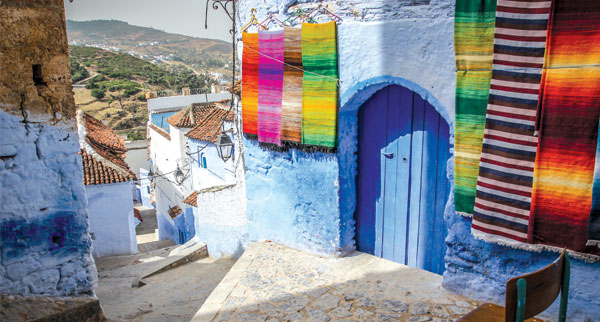 “Tangier has undergone a revival, with renovated galleries, hotels and high-end restaurants.”

Those wanting to get more adventurous can jump on a mountain bike and hit the slopes around the scenic Smir Lake, head out on a diving or snorkelling trip in the Bay of Belyounech, or try the likes of waterskiing, jetskiing, fly-boarding, banana boating and sunset sailing from the hotel.

But for those wanting to kick back, relax and do nothing in remote, peaceful surroundings, this area is a good bet too – especially in peak season, when temperatures rest in the mid-20s and, unlike in the south, overseas tourists are a novelty.

“Visitors to Banyan Tree Tamouda Bay will discover a destination where tourists are few and the culture is authentic – perfect for those who have already been to Morocco and want to be surprised. Guests can go horse riding at Cabo Negro, enjoy water sports at Laguna Smir, visit the otherworldy ‘blue pearl’ Chefchaouen or wander round medieval Tétouan. There are plenty of other resorts tipped to open, including the JW Marriott and Ritz-Carlton – there is even talk that Tamouda Bay could be the future Riviera of Morocco.” 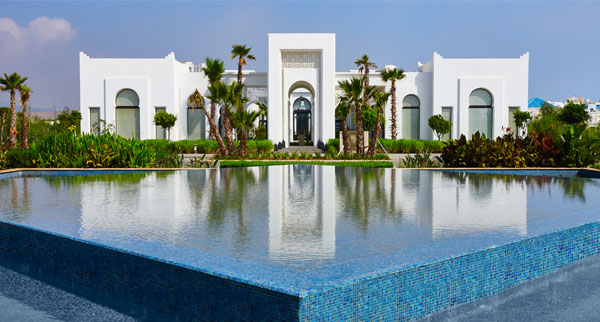 It’s home to 92 villas, each  with its own pool, as well as an excellent spa where the USP is a ‘rainforest experience’, complete with wind and water pattering down on your head. There’s also a hammam, vitality pool, yoga pavilion and gym – which could come in handy as the food here is exceptional.

Among the three restaurants is Tingitana, specialising in local dishes such as ‘stuffed squid tagine’, and Saffron, where delicious Thai curries were followed by the best banana fritters I’ve ever tasted. 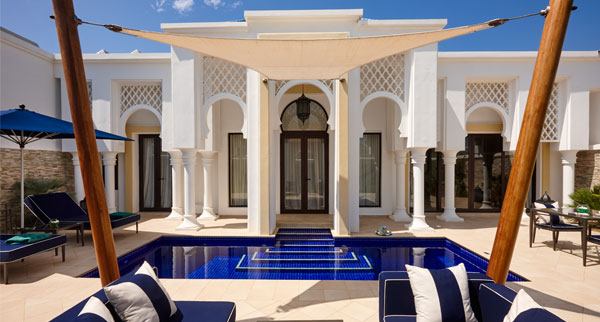 There’s also a cocktail bar with outdoor terrace, and a good kids’ club and children’s pool.

It does all feel a little cut off, so it’s best for those looking to escape it all in quiet surroundings, where the only interruption is a smiling waiter coming to deliver jasmine tea of an evening.

Book it: Nightly rates for a Bliss Pool Villa start at £350. Private excursions to Tétouan are from £210 for two, and half-day trips to Chefchaouen with lunch from £250.
banyantree.com

Go between May and November for the best weather and warmest sea temperatures.