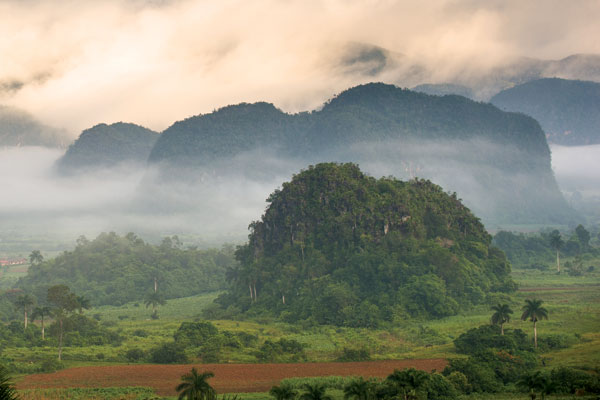 Esteban’s hands move quickly and methodically. First, he spreads parchment out on the rough wooden bench. Next, he adds tobacco leaves, sprinkling the light-brown flakes evenly as he works – they’ve been drying out in bunches for almost 60 days and are incredibly delicate.

As the small mountain of tobacco begins to build up, he explains that, for Cuban cigars, the central vein of the tobacco leaf is removed, and with it, about 98% of the plant’s nicotine. With the deftest of touches, he rolls the tobacco gently into a long, thick sausage and holds the finished cigar in the air, the end pinched between his thumb and forefinger.

Only once he’s sure we’ve all admired his handiwork does he clip the end. Lighting the cigar, he takes a puff and flashes a quick smile in triumph. “Cuba produces the best cigars in the world,” he says.

I’m in the Viñales Valley, Cuba’s lush Unesco World Heritage national park, which is said to produce some of the best tobacco in Cuba and, by default, the world. Esteban is a farmer here, and his farm is one of the stops on a horse-trekking tour of the valley. As a result of its own microclimate, the conditions are perfect for growing tobacco. However, incredible cigars are not the only reason people visit Viñales. 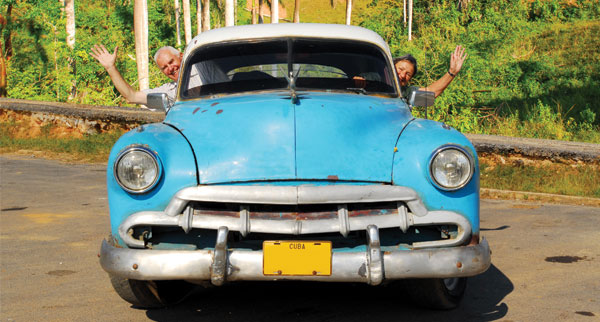 Cuba often conjures images of classic American cars spluttering their way past faded buildings, or of golden beaches sweeping off into the distance. Viñales is different. Verdant and undulating, its landscape is almost prehistoric. Strewn with enormous mogotes, the limestone hills that give the valley its distinctive appearance, it’s a hub for hikers, climbers and other active travellers.

Most of Cuba’s rural areas are off limits for travellers, in terms of hiking. In fact, it’s against the law to trek in certain parts of the country. The Viñales Valley is a rare exception, something that makes it all the more remarkable. It’s this freedom, combined with the rich culture, that makes the area a great sell for the adventurous, as well as the curious.

At just four hours’ drive west of Havana, it’s easily combined with a multi-centre trip to the island’s heady capital and popular beach resort Varadero. Its proximity to both makes it the ideal destination for those who want to see more of Cuba, particularly its rural charms. Some trips even include the colonial masterpiece of Trinidad, on the island’s south coast. 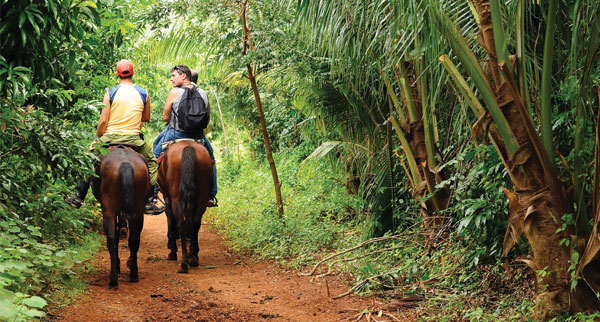 To see a lot of the valley in a short time, horse trekking is the best option. These excursions can take up to three hours and start at about £8 an hour. On my tour, Esteban’s farm is the first stop – and the absolute highlight.

As well as a fascinating demonstration into the gentle skill required to roll Cuba’s most famous export, he explains how the crop is grown and prepared – traditional agricultural methods are employed to ensure the tobacco is of the highest quality. After the tobacco farm, we move on to a nearby coffee estate,
and finally a swimming hole.

“The landscape is almost prehistoric, strewn with limestone mogotes that give the valley its distinctive appearance.”

In between the stops, we see the valley up close: amid the curious mogotes, which seem to leap out of the earth at random intervals, the vivid colours of Viñales come to life. Bright red soil, vibrant green foliage and a cobalt blue sky create a contrast no camera can really capture.

On my second night in Viñales my hosts insist that I hike to the Los Aquaticos viewpoint to see the sunrise. The 4am wakeup call almost puts me off, but the rewards of seeing the valley, still and silent at first light, more than justify the early start. The three-hour hike costs £15 and can be arranged through most casas or directly with local excursions operators such as At Cuban Style.

Exploring isn’t limited to two and four legs as, despite the uneven terrain, the lack of traffic and a series of mostly flat routes make the valley ideal for cycling. Bikes can be hired from Bike Rental Point, off Viñales town’s main square, for about £8 per day. 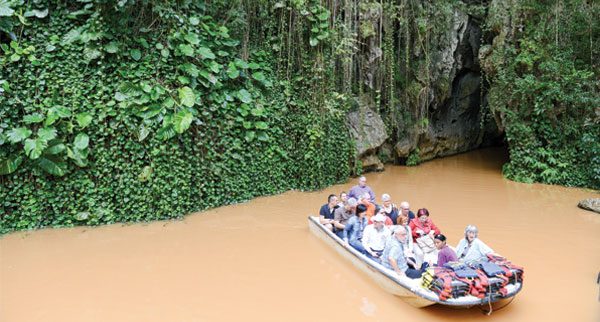 Limestone erosion has helped create some of Cuba’s most complex and intriguing cave systems here, the best of which can be explored easily on excursions from the town. The Cueva del Indio, just four miles from Viñales town, was once used by Cuba’s ancient indigenous people as a shelter. Today, visitors can take a boat tour through its flooded chamber (£4).

Gran Caverna de Santo Tomás offers a slightly more adventurous excursion, as unlike del Indio, there’s no artificial lighting, and the trips require hard-hats and headlamps. Out of its extensive 30 miles of passageways, only half a mile can be explored via official tour. Lasting more than two hours and taking in multiple levels of the cave system, tours cost about £20.

“Limestone erosion has created some of Cuba’s most complex and intriguing cave systems in the valley.”

The other major activity in the Viñales Valley is rock climbing, which it was seemingly designed to accommodate. The steep-sided mogotes are perfect for experienced climbers, while beginners looking for their first taste of the increasingly popular sport can tackle smaller routes closer to town. Like most things in Cuba, climbing is a word-of-mouth activity – especially as Cuba’s government is yet to sanction it officially, so do warn clients they must check their travel insurance carefully. 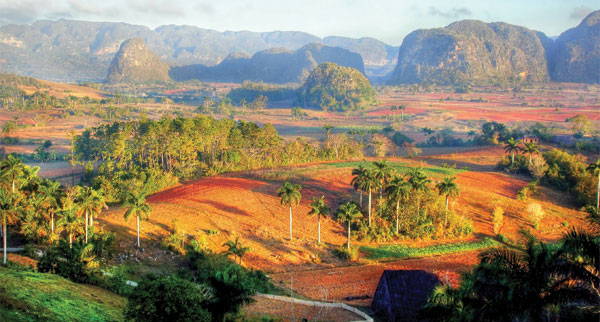 Exodus has a Cuba mixed-activity tour that includes three days’ cycling and hiking in Pinar del Rio and Viñales Valley, plus a visit to a tobacco farm and a tour of Gran Caverna de Santo Tomás. The 12-day trip starts at £2,171.
exodus.co.uk

Cuba Holidays has an eight-day holiday, Mi Casa Es Tu Casa, that visits the Viñales Valley’s mogotes rock formations, explores Trinidad and finishes in Varadero. Prices start at £999 in May or June 2018, including homestay accommodation.
cubaholidays.co.uk

Until 1997, the government controlled nearly every aspect of tourism. However, around this time, the Castro regime began to allow everyday Cubans to run casa particulares (guest houses) from their homes. Authentic and humble, these bed-and-breakfast-style properties are among the island’s most interesting options – and they allow locals to supplement their meagre state wages.

Casas are now commonplace, especially in Viñales town, a charming little settlement of colourful houses. This is as authentic as it comes and a real opportunity to engage with the people here – expect to pay between £18 and £25 per night.

There are plenty of hotels in the area, although they tend to be located away from the town itself. Hotel La Ermita has 62 standard rooms with air-conditioning and pool access (£52 per night) while Los Jazmines Horizontes (£77 per night) looks straight over the valley and has some of the best views in Viñales.