Go green with a twin-centre stay in Singapore and Bintan, writes Tamara Hinson.

There’s something rather surreal about watching a monkey scramble along a branch when you’re just a few miles from the beating heart of Asia’s biggest financial centre. But I shouldn’t really be surprised – Singapore is no longer famous for its banking alone.

Since declaring independence in 1965, this city-state has been on a mission to transform itself into a garden city, and it’s succeeding in that effort. Singapore recently came top in MIT’s Green View Index, which counts the number of trees in cities around the world. One of its greenest spaces is Windsor Nature Park, the city’s newest nature reserve and home to some of its rarest species, including pangolins, terrapins, 50 species of dragonfly and more monkeys than I can count.

“Watching a monkey scramble along a branch just miles from Asia’s biggest financial centre is surreal.”

Some of the reserve’s residents are harder to see, so we learn to keep an eye out for gatherings of other people, as well as wildlife. At one point, we turn a corner to spot a paparazzi-like gaggle of Japanese tourists poking enormous lenses over a wooden bridge. Sprawled on a branch in the river below is a monitor lizard. As we continue, a family of obliging monkeys puts in an appearance, clambering along bobbing branches and showering us with clouds of leaves. 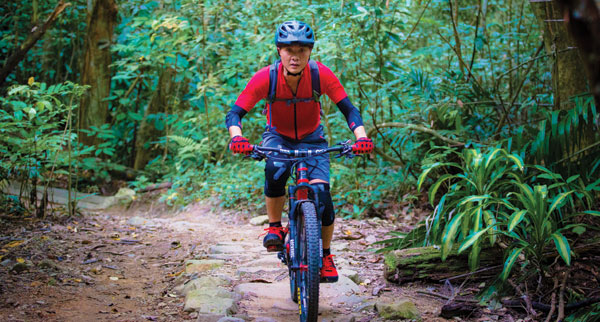 Checking out Singapore’s greenest bits is easy thanks to the Park Connector Network, a web of cycling and jogging trails that does exactly what it says on the tin. There are also regular free guided tours of the parks.

We opted for bike-based exploration. More people than ever are saddling up in Singapore, and there are now two fantastic bike-share schemes: Ofo and oBike. I plumped for Ofo, whose bright yellow bikes can be seen everywhere. They don’t even need to be returned to a stand – users simply lock or unlock them by scanning the QR code on the frame.

We took a slightly haphazard approach, leaving our hotel and pedalling in the general direction of Windsor Nature Park, taking various detours whenever we stumbled across another of Singapore’s many green spaces.

My favourite is Bishan-Ang Mo Kio Park, one of Singapore’s largest urban parks. It’s especially popular with cyclists, and at its heart is a winding river, once a canal. Its banks are now carpeted with wildflowers, while the old concrete has been used to create a grassy knoll and viewpoint. 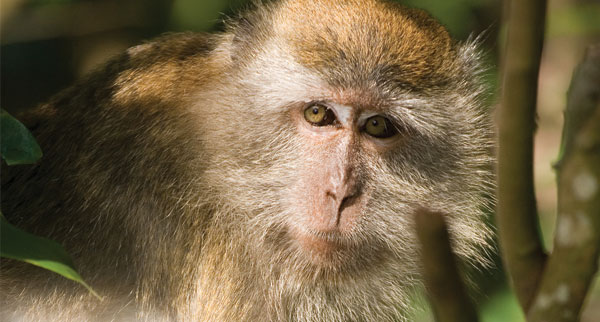 The Park Connector Network offers a choice of five loops, and puts Singapore’s lesser-known areas within easy each, wherever you’re based. Nonetheless, growing numbers of visitors are choosing hotels further afield, away from the bright lights of Orchard Road.

We opted for the Ramada Singapore at Zhongshan Park on Balestier Road, an up-and-coming neighbourhood popular with foodies. The hawker centres here serve up Singapore’s finest street food, although some dishes admittedly aren’t for the fainthearted. As much as I love a bit of local cuisine, I couldn’t quite bring myself to order the fish head stew on offer at the hawker centre closest to our hotel, opting instead for an enormous helping of chicken rice – and paying just under £3 for the privilege.

“As much as I love a bit of local cuisine, I couldn’t quite bring myself to order the fish head stew.”

While prices in the downtown area might be higher, Singapore’s city centre is just as leafy, and bears little resemblance to any other skyscraper-filled metropolis.

Today, Singapore is leading the way when it comes to green buildings, and greenery explodes from its high rises. Take the Parkroyal on Pickering, one of the most environmentally friendly hotels. Along with rain and sunlight harvesting systems, there’s a spectacular sky garden, the footprint of which is the same as nearby Hong Lim Park.

Then there’s Orchard Road’s Shangri-La Hotel Singapore, a veritable microcosm of Asia’s flora and fauna with gardens home to 130,000 species of plants. At one point, during a wander around the greenhouse-like Garden Wing, I turned a corner to find a koi carp-filled pond. Next to it was an elderly Singaporean man, bent over an easel, who turned out to be the hotel’s resident artist. Guests can take home the watercolours he produces, to bring a little of Singapore’s wild side back with them. 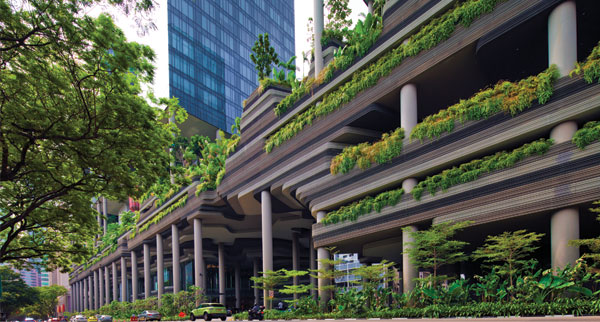 Greener still is Bintan, an Indonesian island close to Singapore – just 50 minutes away via high-speed ferry and making for a pleasant twin-centre holiday. In recent years, several hotels have sprung up on the lush island, and much of the construction is taking place in the centre around a man-made lagoon. Canoes, jet skis, stand-up paddleboards and sail boats can be hired at the water sports centre, and adrenaline junkies can sign up for Jetovator sessions (picture, if you dare, a water-propelled flying bike).

While the lagoon area is popular with families, Bintan’s beach resorts tend to attract couples. Craving some peace and quiet, we headed to the island’s white-sand beaches to check in to Banyan Tree Bintan resort, where 64 villas line a forested hillside overlooking the ocean.

“The bat came back every evening, always alone, to sway quietly away from the rafters as we enjoyed our sundowners.” 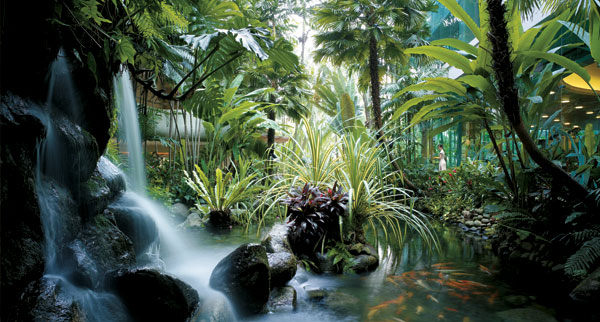 When darkness falls, bats flutter constantly across the sky, and one night, we returned from dinner to find one hanging outside our villa. It came back every evening, always alone, to sway quietly from the rafters as we enjoyed our sundowners. We named him ‘Bintan Billy’, and when we retired for the night, he flapped his wings in disapproval.

I can see why the island’s wildlife has a soft spot for this part of Bintan. Next day, we set out on a guided cycle ride through the jungle – one of many options guests can choose from, alongside birdlife talks, mangrove tours and helping to plant coral.

We spotted snakes, monkeys and a huge, spherical blowfish drifting through the clear waters, while I fell in love with the tiny turtles that wildlife experts were set to release into the ocean.

Yet even though he was nowhere in sight when we came to check out, my heart was still with Billy. If only he knew that I’m already counting the days until my next visit to this lush green island and, hopefully, a reunion with Bintan Billy.

A night’s B&B in a Rainforest Seaview Villa at Banyan Tree Bintan starts at £305.
banyantree.com 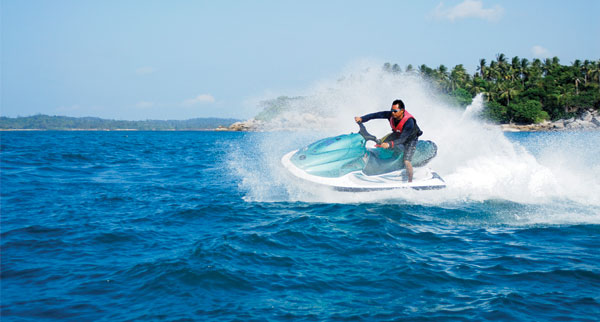 “Southeast Asia is a key holiday destination for young Brits looking for adventure, and Singapore is the perfect gateway to access the region’s lush landscapes, beaches and bustling cities. It’s a melting pot of culture with a top food market scene, bargain shopping and beautiful urban parks and gardens.”

“Singapore is a great start or end point to any Asian adventure. Whether it’s the heritage of Chinatown, the traditions of Little India or the modernity of Clarke Quay, the city is a melting pot of Chinese, Malay, Indian and Arabian culture.” 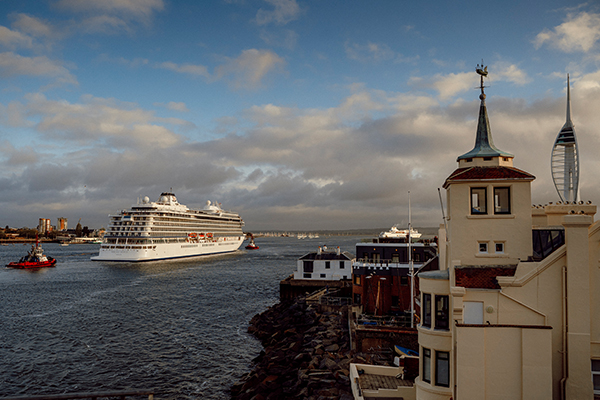 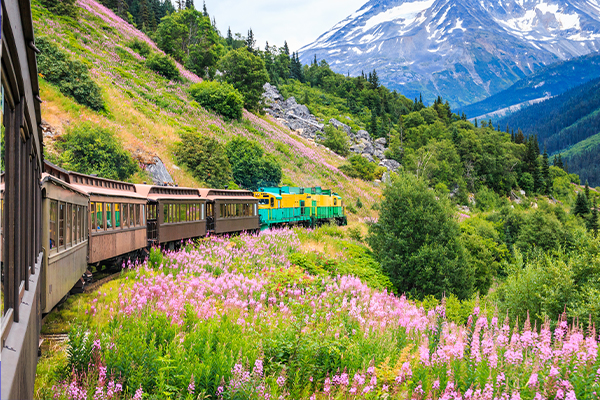