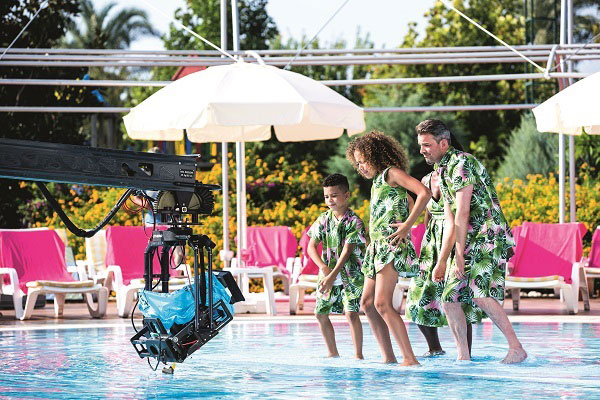 First Choice has made its first ever rap-themed advert, urging customers to “Go Mahoosive with all-inclusive” through its turn-of-the-year campaign.

The tongue-in-cheek video by the all-inclusive specialist – put together by a director who has worked with Ed Sheeran, Beyonce and Rihanna –  is designed to differentiate it with its parent company Tui.

A family of four are captured “bragging” about their holiday at the operator’s Holiday Village in Turkey with lyrics that say First Choice is the “grand masters of the all-inclusive”, the “Big Kahunas of the beach” and “the maestros of all you can eat”.

“We are ‘The Grand Masters of All Inclusive’ and we are shouting – or rather rapping – our credentials loudly and proudly,” said Tui UK and Ireland’s marketing and customer experience director Jeremy Ellis. “First Choice is all about fun and embracing life to the full and this ad captures the euphoria we want our customers to experience on our holidays.”

He told Travel Weekly that, following Thomson’s rebrand to Tui, First Choice needed to make clear its all-inclusive offering in contrast to its parent company’s focus on the more premium holiday experience and said it was the first time a travel company had made a rap advert.

“We said [to the producers] on a scale of one to five on bravery, make it a five. Give us something which will make us feel nervous. At first, I thought this was too edgy but everyone we’ve shown so far loves it.

“Go Mahoosive was a word that was being used in the music, and because it rhymed with all-inclusive it became the campaign line because it was reflective of the song and what the brand stands for.

“You can do what you want, when you want on an all-inclusive holiday. You are the boss. So ‘Go Mahoosive with all-inclusive’ was the perfect line.”

Ellis said using the whole “Turner family” in the video helped them reach their entire target audience. He added: “You can’t help but love the kids, regardless of how old you are and whether you have a family or not. If we didn’t have the kids rapping, we’d lose part of the charm and fun.”

The firm’s market research shows First Choice has a “younger and more digitally savvy” audience than Tui, said Ellis, who said a higher percentage of customers book via mobile when compared to Tui.

“Differentiating First Choice allows Tui as a business to stretch our target market and leave Tui to target a slightly more up-market profile,” he said. “We are trying to pull the two brands apart and market to two different audiences.

“Although Tui offers all-inclusive, it’s not all that it does. The tone of the First Choice brand is different. It is the expert and has a real distinctive edge.”

There will be no fresh Tui advert for the peak, turn of the year, advertising campaign. Ellis said its current advert – in which a woman is “the star of an epic holiday finale” – was still important in getting across change from Thomson.

Despite the humour of the ad, and the digital savviness of the clientele, Ellis played down suggestions of a bid to go viral online – something the marketing chief said was “difficult” to plan for.

But Ellis believes the video has the potential to “catch on” online – and the plan is to use more of the content captured during filming across digital channels.

The full 120-second advert will debut on TV on Christmas Day during the break in the Great British Bake Off on Channel 4. A 90-second edit has been made for cinema showings and 30-second clips will be aired as the campaign continues through peak season while short, ten-second excerpts will go on social media channels with parallel radio and print campaigns that altogether is set to reach 90% of UK adults.

The video’s director Emil Nava, who has worked with Calvin Harris, Rihanna, Ed Sheeran and Beyonce, said: “Creating music videos is a much more free and spontaneous process than filming commercials and I was given free rein to shoot in exactly the way I wanted to.

“We’ve ended up with something really high energy and fun with absolutely amazing performances from a group of people not used to performing like this.”

Gavin McGrath, creative director at creative agency Y&R London, added: “Essentially, we’re bragging about the product, with all the confidence and swagger you’d expect from the experts in all-inclusive holidays, so rap music felt like the perfect vehicle to do that.”