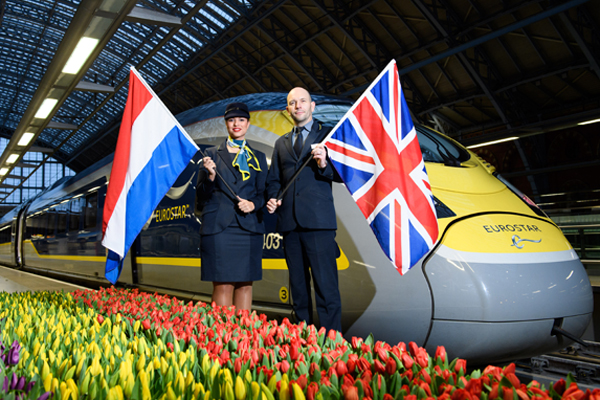 Eurostar is today previewing a new service between London and Amsterdam.

The inaugural service to The Netherlands was due to depart from London St Pancras International at this morning ahead of tickets for the new route going on sale from 4pm starting at £35 one-way.

The first commercial service will run from April 4 with two trains a day departing from London to Rotterdam and Amsterdam at 8.31am and 5.31pm.

Journey times of 3 hours to Rotterdam and 3 hours 41 minutes to Amsterdam are being claimed “providing travellers with a compelling, environmentally friendly alternative to the airlines”.

The return will initially involve changing trains in Brussels where passport controls and security screening will be carried out.

“This connecting return journey will be a temporary measure whilst the governments in the UK and The Netherlands complete an agreement which will enable passport checks to be conducted on departure in The Netherlands as in other key Eurostar destinations,” the company said.

“The governments have committed to putting this agreement in place by the end of 2019.

“Eurostar is actively engaging with the governments on this matter so that Eurostar passengers travelling between the UK and The Netherlands will be able to enjoy a direct service in both directions.”

The London-Amsterdam service also delivers a record new journey time for passengers travelling on the London-Brussels section of the route.

Going forward, these customers will see their journey time cut by 17 minutes to 1 hour 48 minutes.

“With just six weeks to go until the start of service we are looking forward to providing customers with a fast, comfortable connection from London to Amsterdam and transforming travel between these important capital cities.”