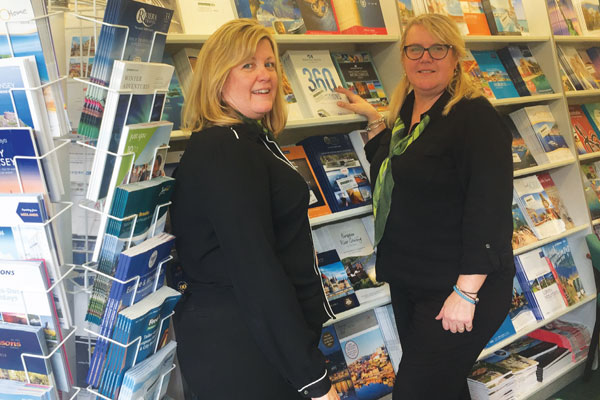 Ben Ireland went to see Michelle Oliver and the team at Kinver Travel, which brings the world to a village of 7,000 people.

“We don’t keep computerised records,” says Michelle Oliver, co-director of Kinver Travel. “But we know our demographic. We’re here all the time and get to know our clients and what they like. It’s not exactly the same relationship you have with a friend, but it’s about as close as you can get.”

This attentive and personalised service given to each client that walks in sums up the shop’s approach. Michelle, who has more than 30 years’ experience in the travel industry, knows the importance of such service in keeping customers’ loyalty. So much so that she can quite genuinely name every other person that walks past the shop, and in many cases the last holiday they booked with her or her team.

There has been a travel agency in the spot, next to cobbled shopping alley Chenevare Mews, since the late 1980s when it was Don Everall Transglobe. The store became West Midlands Co-op before Michelle and her sister Sue Foxall bought the shop and started Kinver Travel Centre in December 2003.

Sue was chief executive of Midconsort, the forerunner to Kinver Travel’s consortium Elite Travel Group, and Michelle had worked in tour operating, with roles at Thomson Holidays and Carousel in “the days you could have a weekend in Faro for £5”, before joining Lunn Poly as an agent.

A chance conversation between Sue and West Midlands Co-operative chief executive Ben Reid at the 2002 Abta convention in Cairo eventually led to the sisters taking over the premises. Kinver matched West Midlands Co-op’s £500,000 annual turnover in six months and has increased it every year since.

Michelle says the challenges of the high street are different today than they were 15 years ago.

But despite the changes, Kinver Travel Centre has kept high street traditions, like closing for half an hour at lunch.

“We’re competing against the internet so you have to offer more,” she says.

“That’s why having strong relationships with your customers is so important, not just for the repeat business, but for the word-of-mouth referrals.”

A quick look around shows the shop offers everything from cruise and safari to typical bucket-and-spade breaks and UK holidays. Classic Collection is also a popular operator, and called to increase the level of commission it pays Kinver midway through Travel Weekly’s visit.

“It’s old-fashioned, but we have a sense of what people are interested in from talking to our customers,” says Michelle.

“I know Majorca is popular, but if you asked me how many bookings we made last year I wouldn’t have a clue.”

Based on that logic, villa holidays, trips to watch Formula One racing and “any holidays that are complicated to organise” have proven popular. “It goes in trends. Last year we sold lots of Canada, but a few years back everyone in Kinver was going to Brazil.”

Her point is, a good travel agent doesn’t need to rely on data to find the best holiday for their client, but needs to offer added value and expertise to convince people to book with them rather than online.

Moving on from Monarch

With Birmingham its closest major airport, the collapse of Monarch was a shock. Not only did Kinver have to close its doors and abandon new bookings for two days, so staff could rearrange 26 holidays, it also had to explain to customers who were loyal to Monarch.

“A lot of people really liked Monarch,” says Michelle. “I know airlines such as Jet2 have filled some of the routes, but we’re still without a Birmingham to Lisbon flight.”

Looking to the future

The four-strong Kinver Travel Centre team are all part-time and Sue has now taken a back seat. “She officially retired in August last year,” Michelle says. “She still sells holidays to a select few customers. She just takes longer holidays herself.”

She adds: “Travel has changed massively in 15 years. People still want to come in, but the challenge now is getting seen.”

To make a splash, Kinver has started hosting events including at local pub The Fox Inn, where 10 operators such as Prestige Holidays, Fred Holidays and Great Rail Journeys exhibited. The day of our visit they had two artificial palm trees ready to put outside to draw attention. Michelle says the future is “more events” and praised new recruit Victoria Jones for “fresh ideas to let people know we are here” such as a table full of brochures in front of the shop – sometimes with balloons – on sunny days. Window offers remain popular and the agency has realised that the technique translates to Facebook as well.

“It’s about standing out on the high street and making people remember there’s a local agent in the village,” she says. You don’t need computerised records for that.

Kinver is a sleepy town, with no train station, so it’s probably for the best that its local agency is full of character. The Elite Travel Group member has clients in destinations such as the Bahamas and California, and customers keep coming back, with referrals and repeat bookings making up the bulk of business. But although word travels far, keeping up appearances in the village is paramount – though that’s no problem to an agency whose co-director Michelle can name half the people who walk past. A fierce pride in being a local business that links the village of about 7,000 people to the world shines through our conversation. They know what their clients like without keeping computerised records, but are always keeping on top of industry developments to make sure they offer all the trending destinations.

A recent refresh of staff has brought new ideas in a bid to stand out to make the most of a footfall much smaller than most high street agencies enjoy.

I’ve been in travel… for 21 years now. I started working at Lunn Poly after college and following that I went to work for Thomas Cook in Bedford, then had two children. I came back to work for Kinver Travel Centre nine years ago.

I love selling… Florida. I’ve been there six or seven times, with and without the kids.

Travel has changed over the years because… there’s so much choice now. Twenty years ago you needed an agent to make simple bookings; now they’re needed to deal with more-complex products.

I’ve been in travel… since 1984. I worked at Don Everall Transglobe in Worcester and have since been at a number of independent agencies.

I love selling… cruise. I’m going on two myself this year, one in the Mediterranean and one from Dubai. I like to go on a range of cruises with different lines and it helps me find the right cruises for our customers.

The strangest request I’ve had was… when I made a booking for a sports group and they wanted to get pole vaulting poles on the flight – we booked them with Turkish Airlines.