Tamara Hinson finds out how to spend a weekend in this serene Scandinavian city.

Overnight stays have increased by more than 50% over the past decade, and this year, there’s a host of new attractions to check out, alongside Stockholm staples such as the Vasa Museum, which remain as spectacular as ever. Here’s how to fit it all in to a weekend. 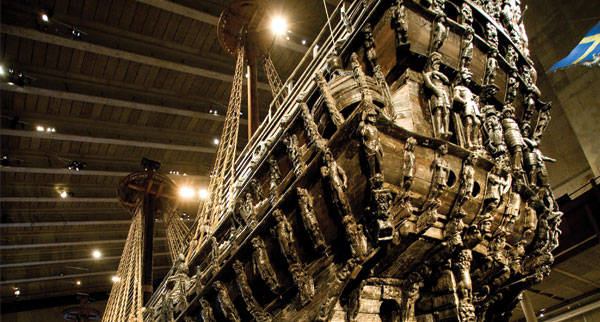 09.00: From the city centre, you can get to Djurgården, Stockholm’s museum island, by hopping on a boat, but wander there on foot and you’ll get a greater appreciation of the city’s layout. Stop at one of the cafes on Strandvägen, which hugs the waterfront, and soak up the view of the Vasa Museum while indulging in a fika – the coffee and cake fix loved by the Swedes.

“The entire museum was built around the ship, and it’s filled with interactive displays. You can even learn how to tie knots used by seamen in the 17th century.”

10.00: The Vasa Museum is home to the world’s only almost fully-intact 17th-century ship. The enormous vessel (which capsized within hours of setting sail for the first time) lay on the ocean floor for 333 years before it was raised. The entire museum was built around the ship, and it’s filled with interactive displays. You can even learn how to tie knots used by seamen in the 17th century.
vasamuseet.se 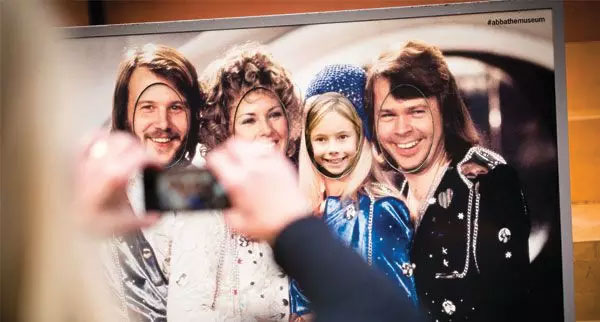 12.00: Get your groove on at Abba The Museum, a short walk from the Vasa Museum. You’ll be able to admire Abba’s most famous costumes (the dresses adorned with enormous cats are some of the more spectacular outfits), listen to their greatest hits and strut your stuff alongside holographic versions of the Swedish superstars. And if that vintage telephone rings? Pick it up – the only people to know the number are the band members, who occasionally call and speak to visitors.
abbathemuseum.com

“You’ll be able to admire Abba’s most famous costumes, listen to their greatest hits and strut your stuff alongside holographic versions of the Swedish superstars.”

13.00: Grab some lunch at nearby Oaxen Slip, a recently-opened restaurant on the water’s edge. The site was once a shipyard, and the industrial chic (think chunky metal girders and exposed light bulbs) is softened by the rustic wooden sailing boats hanging from the ceiling. It’s all about hearty, Swedish fare here, and the herb-grilled Swedish char is a particular highlight. Price-wise, main courses start at around £12.
oaxen.com/en/bistro-slip 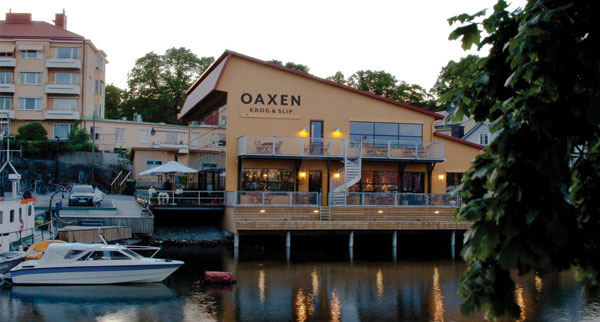 14.00: Walk off your indulgences with a stroll through nearby Royal National City Park, the world’s first national urban park – deer, hares, foxes and moose can all be spotted. Notable buildings include the Fiskartorpet. This tiny wooden hut was once King Carl XI’s fishing cabin. The building was first referred to on a map drawn in 1696.

“Stockholm is built on a series of islands, so these small ferries are often the easiest way to get around. But they don’t automatically stop at every pick-up point.”

15.00: Head to the Allmänna Gränd ferry stop near Gröna Lund theme park for the short journey to Slussen, Gamla Stan – the city’s old town. Stockholm is built on a series of islands, so these small ferries are often the easiest way to get around. But they don’t automatically stop at every pick-up point. At the Skeppsholmen stop, for example, you have to press a button to switch on a light so the captain knows there are passengers waiting. 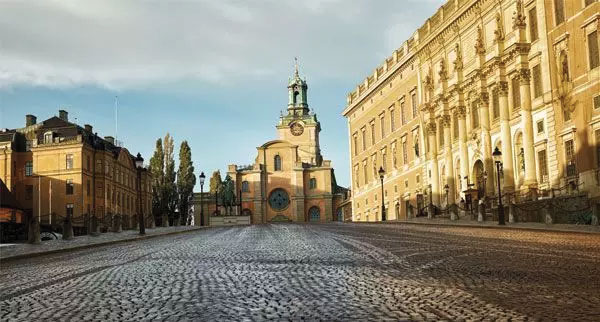 16.30: Time to get lost in Gamla Stan. It’s one of Europe’s largest and best-preserved medieval city centres, and dates back to 1252. Breathe in if you wander down Mårten Trotzigs Gränd, one of the narrowest streets – you’ll easily be able to touch the buildings on either side. After picking up some souvenirs, head to Gamla Stan’s Royal Palace to wander around the treasury and visit Gustav III’s Museum of Antiquities.

“Breathe in if you wander down Mårten Trotzigs Gränd, one of the narrowest streets – you’ll easily be able to touch the buildings on either side.”

19.00: Finish the day with some fine dining, Swedish style, at The Flying Elk. Björn Frantzén is one of Sweden’s top chefs (you can buy his bestselling cookbook there) and he’s famous for giving local produce a spectacular twist. Try the baked skrei with Avruga caviar or the guinea fowl with toasted hazelnuts, before raising a toast to Stockholm with a locally-brewed beer. 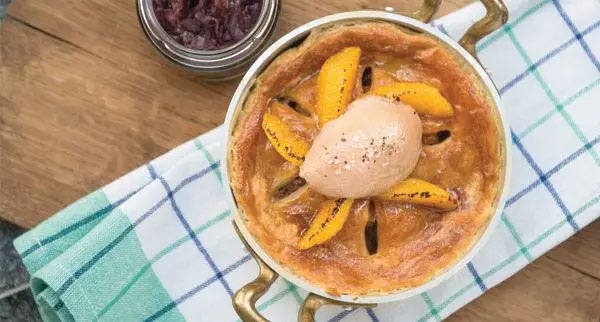 09.00: More than 90 of the city’s 100 metro stations have been given spectacular makeovers by artists. To find out more about this subterranean art gallery, book a metro tour with Konstvandringar Stockholm (from £213 per group of up to 25). The most breathtaking examples include T-centralen, which has beautiful, painted blue silhouettes of the construction workers who built the station, and Solna centrum, where huge murals depict fiery red skies above bright green Scandinavian forests.
konstvandringar.se

“In Stockholm, these places are known as ‘ett hål I väggen’ (holes in the wall). At Racamaca, the food is served by the owners, – the pimentos parmesan comes highly recommended.”

12.00: Head to the laidback Södermalm neighbourhood for a mid-afternoon snack. Racamaca is a tiny, cosy restaurant next to the Mariatorget metro station. In Stockholm, these places are known as ‘ett hål I väggen’ (holes in the wall). At Racamaca, the food is served by the owners, and the pimentos parmesan comes highly recommended.
racamaca.se

13.00: Sign up for Stromma’s 50-minute Royal Canal Tour (£17 per adult), which starts in the city centre, before passing through the Djurgården canal and looping back. It’s an audio tour and a great way to learn about Stockholm’s history. Highlights include the lighthouse built by Gustav Dahlén and the Rosendal Palace.
stromma.se 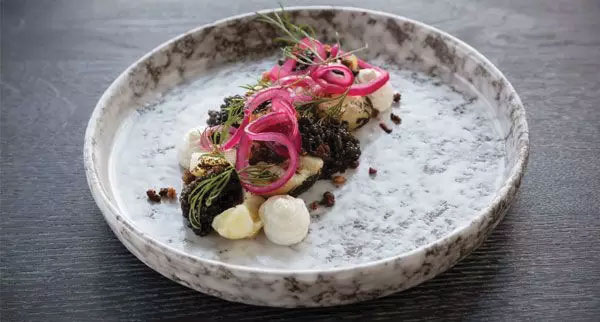 16.00: If you’ve got a head for heights, you’ll love Stockholm’s newest attraction, and as of last year, you can even throw yourself off the Victoria Tower, the location for the highest bungee jump in the Nordics. Afterwards, pop next door to the Kista Galleria for some retail therapy. Essential stop-offs include Sweden’s biggest bookstore chain Akademibokhandeln, Åhléns, an upmarket Swedish department store, and Kahls The & Kaffehandel, a specialist tea and coffee shop that dates back to 1911.

“Pop next door to the Listening Lounge, a bar designed with die-hard music lovers in mind, and created by one of Sweden’s top DJs.”

18.00: Satisfy those hunger pangs with a visit to Stockholm’s coolest new hotel At Six, in up-and-coming Brunkebergstorg near the city centre. Rooms are sleek and spacious, and facilities for business travellers include a podcast studio and event space. But back to dinner: head to the Dining Room for contemporary, seasonal cuisine prepared by jetsetting head chef Andreas Askling. Afterwards, pop next door to the Listening Lounge, a bar designed with die-hard music lovers in mind, and created by one of Sweden’s top DJs. Geeks will love the high tech Japanese sound system, and there will be regular podcasts, DJ sets and talks by musicians.
hotelatsix.com

20.00: Time for a nightcap at The Winery Hotel. Described as Sweden’s first urban winery, the property has an onsite winery (which can be visited on tours) along with several restaurants, and tasting sessions take place on Thursdays, Fridays and Saturdays. The rooftop bar, complete with pool, is the best spot for a nightcap, although it’s only open during spring and summer.
thewineryhotel.se 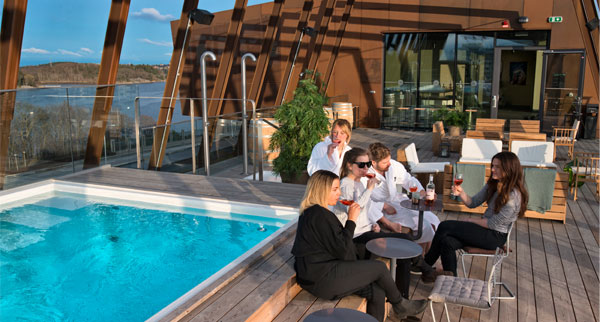 “Stockholm is a fantastic place for a short break. I recommend a stroll around the cobbled streets of Gamla Stan, steeped in history. In contrast, the new part of town offers huge department stores, boutiques and a great choice of bars and restaurants”
Suzel Taber-Shaw, managing director, Scandinavia Only 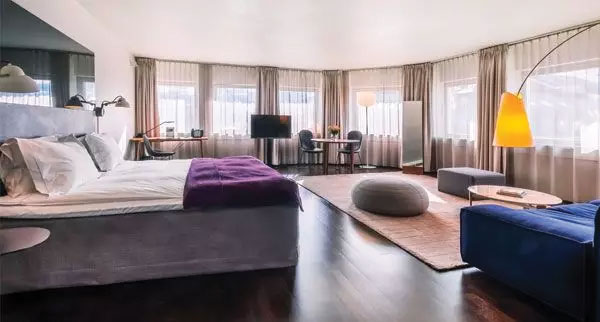 Courtyard by Marriott Stockholm Kungsholmen
Amenities at this four-star city centre hotel include a gym and a bike rental service. The hotel’s restaurant, Bjork Bar & Grill, serves international cuisine, but its central location means you’ll have a wide range of options on your doorstep, too.
Doubles from £87 per night.
marriott.co.uk

Scandic Continental
This modern city centre hotel has a gym and sauna, along with 29 meeting rooms. Rooms are spacious and stylish although it’s worth noting that not all have windows.
Doubles from £126 per night.
scandichotels.com

Nobis Hotel
The Nobis Hotel (pictured), in the Norrmalmstorg neighbourhood, describes itself as Stockholm’s first contemporary luxury hotel. The Gold Bar has an extensive cocktail menu, and there are two restaurants, both specialising in Italian cuisine. The 201 rooms range from single rooms to four types of suite.
Singles from £182 per night.
nobishotel.se

Best Served Scandinavia offers a four-day break to Stockholm from £495, including flights, three nights’ B&B at the Clarion Hotel Sign, and tickets to the Abba museum.
best-served.co.uk