Laura French gets a head for heights on a trip to Toronto.

I’m standing 365 metres above Toronto at the top of the CN Tower, looking out across an endless sea of skyscrapers, little grey roads and minuscule cars scattered beneath a dusky haze.

But hold it there. This is no ordinary glass-enclosed view of the city. I’ve just embarked on the EdgeWalk, a heart-stopping adventure for (evidently) slightly crazy people. It involves circumventing the outer metal platform of this soaring, needle-like structure with no barrier, walls or handrails (thankfully there’s a harness).

I’m not entirely sure what I’ve let myself in for, but I soon find out. A series of testing drills have me dangling my toes over the edge of the tower, then leaning right over it so that I feel as though I’m about to faceplant Toronto, while the wind whips my hair and my red bodysuit flutters with the thudding of my heart. This isn’t for the faint-hearted but, for clients up for the challenge, it costs around £125 and lasts 90 minutes, including 25 minutes outside; not suitable for under-13s.

The EdgeWalk isn’t the only way to experience Toronto’s tallest structure. The following night I find myself tucking into a gourmet meal at the 360 Restaurant, where tables are on a rotating platform and the views, gradually changing, are nothing short of spectacular – think city lights twinkling like stars amid a mass of black, and skyscrapers piercing through in bright, golden clusters. It doesn’t take long to see that this is a city that knows how to impress. 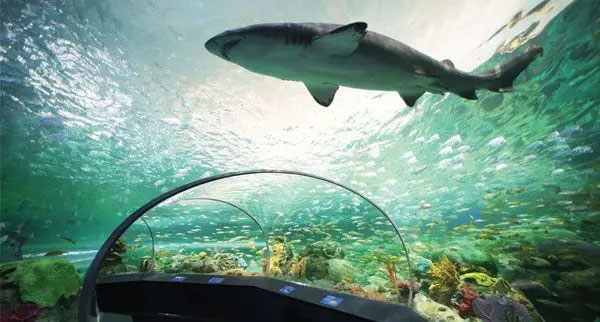 And impress Toronto continues to do as I explore its neighbourhoods, which span business district to beach heaven, hipster markets to historical museums.

At the core of it all is downtown, with its theatres, malls, restaurants and a plethora of attractions, including the iconic Nathan Phillips Square and City Hall. Here you’ll also find Ripley’s Aquarium, a striking building complete with 16,000 aquatic animals as well as interactive displays and a luminescent tank where jellyfish the size of fingernails glow bright pink under a UV light. It’s well worth recommending to families, with entry from £17 for adults and £11 for six to 13-year-olds.

Beyond the limits of downtown lies the Distillery District, a collection of pedestrian-only, cobblestone streets and industrial buildings once home to the largest whiskey distillery in the British Empire, whose beginnings date back to the early 1800s. Today it’s an artsy quarter scattered with one-off boutiques, galleries and coffee shops and it’s well worth a wander, especially in December, when the Toronto Christmas Market descends on the character-filled lanes with European-style chalets selling mulled wine, craft beers and other festive delights. 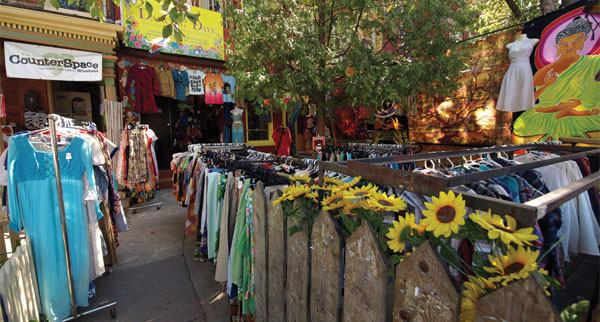 If clients like that, they will probably be taken by Kensington Market too. Located a short amble away from Chinatown, it’s a cool, bohemian district and former immigrant neighbourhood where brightly coloured Victorian houses-turned-shops sell vintage books and tie‑dye clothes, and trendy bars and restaurants serve food from across the globe. Picture a dreadlocked, barefooted Rastafarian selling me second-hand books from a cute little house filled with aromas of aged wood, and you’re on the way to understanding its appeal.

There’s plenty more in the way of quirky spots elsewhere in the city, not least the legendary St Lawrence Market, a huge indoor bazaar filled with fresh produce, meat, cheese and antiques that National Geographic named the best food market in the world in 2012. Try the renowned ‘peameal bacon on a bun’ at Carousel Bakery, apparently frequented by Catherine Zeta-Jones and Drake, or the generously sized Boston Blue Fish & Chips at Buster’s Sea Cove.

“Six floors and more than 30 galleries set in an atmospheric, palatial building offer insight into both local and international heritage.”

For further cultural musings, suggest the Bloor Street Culture Corridor, home to a smattering of attractions including the Royal Ontario Museum. Here, six floors and more than 30 galleries set in an atmospheric, palatial building offer insight into both local and international heritage, and collections span everything from art deco to the history of dinosaurs. Prices from £11 for adults, £8 for children.

Next door you’ll find the Bata Shoe Museum, an intriguing little spot dedicated to all things foot-related which traces the history of shoes from cavemen to current times. It might sound niche but it’s rather fascinating, and well worth recommending to fashion-y types, with entry from £8 for adults and £3 for children. 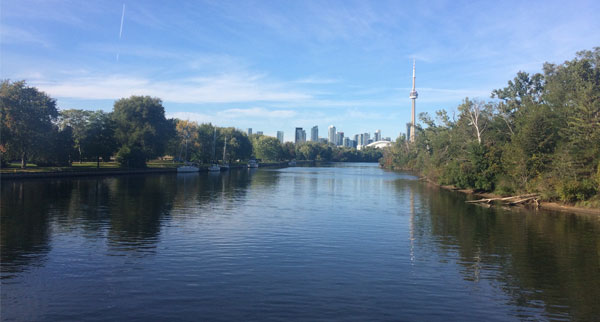 Most impressive for me, though, was Toronto’s harbourfront on Lake Ontario. I embarked on an idyllic boat trip here with Mariposa Cruises and found myself gliding past exotic birds, grass islands and autumnal trees speckled yellow, green and burgundy, before glimpsing the city skyline under a solid blue sky. Prices are from £14 for adults and £9 for children.

If clients are here in summer suggest a trip to the Toronto Islands, 15 minutes away by ferry. Visitors will find swimmable beaches, an amusement park and a 200-year-old lighthouse on its shores, plus the chance to kayak, cycle and hike; there’s even a community of 600 people living in a cluster of olde‑worlde cottages.

No trip to Toronto would be complete without a visit to Niagara Falls. At an hour and a half’s drive away, it’s easily accessible, and it’s also nicely commissionable, thanks to tours offered by ticketing providers including Do Something Different and Attraction World.

“Admiring it all from the platforms above was every bit as spectacular as I’d imagined, with luminescent blue water rolling mesmerisingly over the edge.”

Every minute, the equivalent of six million bathtubs of water crash over the falls’ three sections: the American, Bridal Veil and Horseshoe Falls. Admiring it all from the platforms above was every bit as spectacular as I’d imagined, with luminescent blue water rolling mesmerisingly over the edge, thundering down in incomprehensibly powerful torrents, while a bright rainbow pierced through puffs of ethereal mist. 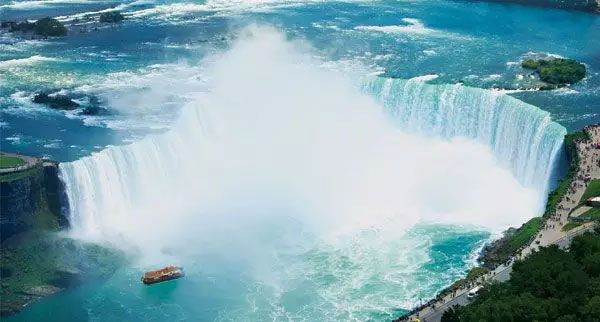 A host of family-friendly attractions built around the falls makes it something of a theme park. Most exhilarating was the 20-minute Hornblower cruise, which took us almost directly beneath two of the falls and had me drenched so much from the spray I looked like I’d just rafted the thing. Despite the squeals, it’s definitely worth recommending, with prices from £14 for adults and £9 for children (under-fives go free); open April 1 to November 30.

Equally impressive was Journey Behind the Falls, a series of underground stone tunnels built in the 1800s from which visitors can watch the water tumble, surrounded by thunderous sounds and atmospheric vibrations (from £7 for adults and £5 for children aged six to 12).

“Most exhilarating was the 20-minute Hornblower cruise, which took us almost directly beneath two of the falls and had me drenched from the spray.”

There’s also the MistRider Zipline, which takes you whizzing over the water at 40mph during a 35-second thrill with panoramic views (from £33).

But for those wanting to go all out, suggest a helicopter ride. Niagara Helicopters’ 12-minute Classic Tour isn’t cheap (£79 per adult, walk-in only) but it is extraordinary, with miniature flashes of emerald-green water unfolding below, so small and perfect-looking it didn’t quite feel real – which took me back to dangling off the edge of the CN Tower. It seems there’s something about Toronto and its surroundings that brought out my head for heights, and I won’t be forgetting either in a hurry.

Toronto’s first Kimpton hotel will open this summer, with stays available from July 1. 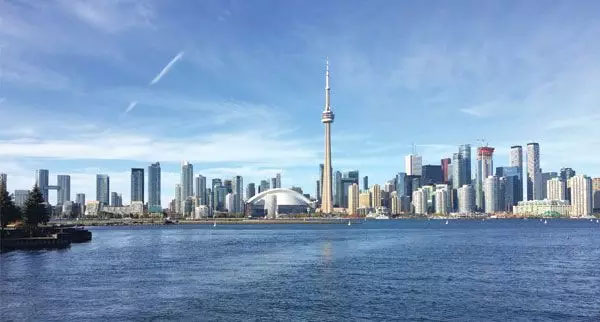 Trafalgar offers an eight-night Best of Eastern Canada End Toronto tour combining the city with Niagara Falls, Ottawa, Quebec City, Montreal and beyond, from £1,925. The price includes accommodation, transport, some meals, airport transfers, entry to the CN Tower and other highlights, plus a Be My Guest experience dining at a Niagara winery.
trafalgar.com 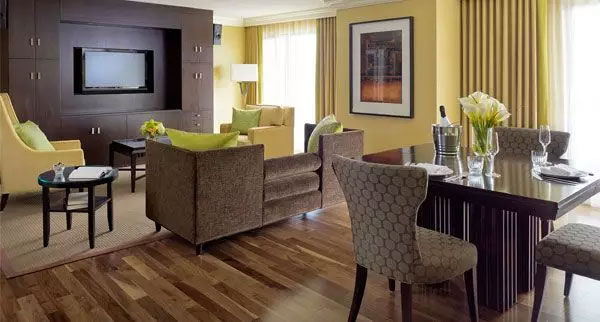 The biggest hotel in Canada, with more than 1,500 rooms and 26 floors, the Chelsea is something of a labyrinth. But once you’ve got your bearings it’s a big box-ticker, with a hard-to-beat location just off Yonge Street in the heart of downtown and facilities including a health club, indoor pool, kids’ centre, casual restaurant and cocktail bar. Rooms are comfortable with excellent views over downtown and its surrounding skyscrapers, and the renowned Eaton Centre – North America’s busiest shopping mall – is just a five-minute stroll away.

Book it: Rooms at Chelsea Hotel Toronto start at £101 a night.
chelseatoronto.com 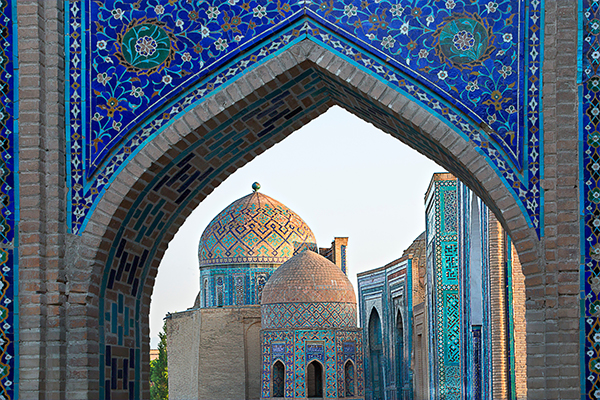