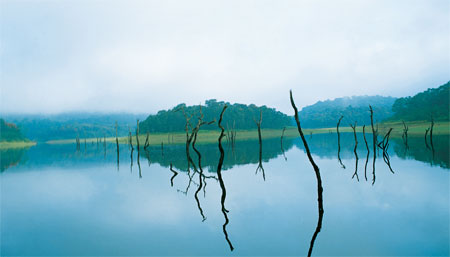 On its tranquil streets, mosques nestle against temples, churches face synagogues, and the religious tensions that dog some areas of India seem a world away.

Keralans call their state ‘god’s own country’, yet seem relaxed about which god they refer to.

The reputation for peace and happiness in Kerala isn’t just based on its inhabitants’ abilities to reconcile religious differences.

Good standards of healthcare have brought a higher life expectancy than any other state in India, lower child mortality rates, and its education system ensures 100% of its people are literate.

There’s a streak of communism running through Kerala’s history, and despite the fact that it’s not a particularly rich state, the wealth is distributed more evenly here than elsewhere in the country.

All of this minimises the grinding poverty prevalent in northern India, which can overwhelm some visitors.

Kerala feels different from the popular yet frenetic Golden Triangle region, making it a wonderful destination for a second-time trip to India and a soft alternative for nervous first-timers.

Kerala’s beautiful backwaters hit the headlines as the setting for Arundhati Roy’s 1997 Booker Prize-winning novel The God of Small Things.

The Kuttanad region of interconnecting lakes and rivers stretches for 47 miles from Kochi in the north to Kollam in the south.

No trip to Kerala would be complete without spending a day floating through the sleepy canals between paddy fields and tropical greenery, watching villagers herding bullock or washing clothes in the river.

The way of life in this area hasn’t changed for centuries, and it’s impossible not to slow down and relax in this idyllic environment.

Book clients a tour that includes a trip in a Kettu Valam. These traditional houseboats are made from wood and coconut fibres, and visitors can cruise through the day, eat traditional Keralan food cooked by an onboard chef and stay the night on the boat, lulled by the lapping of the water outside.

Kerala’s attractions are predominantly rural, and the port of Kochi is the only urban draw for most tourists.

Set on a peninsula opposite the modern Ernakulam district, the historic Fort Cochin and Mattancherry areas have a European feel, with the legacy of Portuguese, Dutch and British traders evident in the well-preserved architecture.

Unlike many Indian cities, it is easy to wander on foot around this area taking in all its sites.

A trip to the peninsula’s north shore is a must, to see the iconic Chinese fishing nets suspended from arched poles. Another equally important must-do is a visit to the Mattancherry Palace to see the ornate murals inside.

A boat trip around the bay at dusk can pay off with more than just a beautiful view of the sunset as dolphins often frolic around the boats.

Kochi is also a great place to see a traditional Kathakali dance (see video below). Performers wear multicoloured costumes and bright make-up to emphasise their features, as facial expressions play a large part in the storytelling process.

Up in the cool and fragrant air of the Cardamom Hills, the Periyar Wildlife Sanctuary centres on a large lake created by the British in 1895 as a reservoir.

Although there are tigers and leopards, it’s rare to see them here, but visitors are more likely to spot elephants, wild boar, Malabar giant squirrels and more than 260 species of birds.

Many tourists take a cruise on the lake, but send more adventurous visitors on a guided walk. With special socks to protect their ankles from leeches, they can wander through the deciduous woodland and get closer to the animals.

Bird lovers are also in paradise at the Kumarakom Bird Sanctuary, especially between November and March, where species migrate here from as far away as Siberia.

The Western Ghats run along Kerala’s backbone, separating it from Tamil Nadu to the east. Spice and tea plantations abound, and it’s easy for tourists to visit these from the Thekkady area near the Periyar reserve.

Many tea factories still use English-made machinery dating from Victorian times, and after watching the leaves being chopped, fermented and sifted by size, visitors can enjoy a cup and purchase the fresh tea.

During spice plantation tours, guides pluck leaves and berries, split bark and ferret for roots in their quest to show visitors how the stuff we buy in jars starts life.

Further north – and even higher up, at 1,600 metres – Munnar is the main tea-growing region of Kerala. Tourists can pay a visit to the hill stations and the area is becoming popular for hiking and off-road cycling.

As Kerala is a small state it’s easy to see a lot in a short time, with most tours stretching from eight days to about a fortnight. Many operators include time in Kochi, the backwaters, the hills and end with a few days on the beach.

While there are plenty of hotels, homestays are popular in Kerala. You can book through specialist Mahindra Homestays or through mainstream operators offering homestays in their programmes, such as Kirker, The Adventure Company, Tropical Locations, Bales and Explore.

Further south and less crowded than Goa, Kerala’s stretch of the Malabar coast is lapped by the Arabian sea and fringed by coconut palms.

Wild headlands back the deserted beaches in the north, but in the south there are developed beach resorts. Kovalam, at Kerala’s southern tip, is the busiest resort with a choice of hotels.

Kerala’s beaches are beautiful, but the water can have strong currents, so ensure clients are aware of this.

Premier Holidays’ six-night Journey Through Kerala tour, which features seven nights’ bed-and-breakfast accommodation at Marari Beach Resort, costs from £1,558 for travel between May 1 and July 15. The price also includes return flights with Emirates to Cochin via Dubai.  Tel: 08444 937 4448

Kirker Holidays offers Kerala Dreams, an eight-day Southern India itinerary, from £1,875 twin-share. The tour includes scheduled flights, private air-conditioned car transfers, sightseeing and excursions with an English-speaking guide, five nights’ hotel accommodation with breakfast and one night’s full-board on a houseboat. The price is valid for departures until April 20. Tel: 020 7593 22878