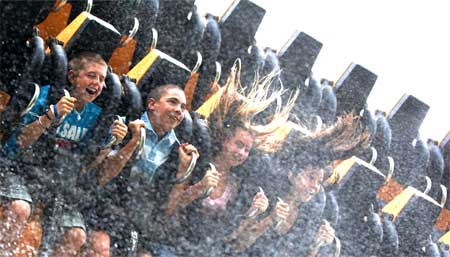 There’s no shortage of new developments at UK theme parks this year, from the ‘world’s scariest roller coaster’ at Thorpe Park to a retooled ticket centre at Blackpool Pleasure Beach.

And for families with pockets deep enough to face the strong euro, there’s plenty going on in mainland Europe too.

Below we round up the new rides, restaurants, shows and facilities set to boost domestic and short-haul theme park breaks this year.

If your clients are looking to go further afield, check out our guide to the latest theme park developments in the US.

Saw – The Ride is being billed as ‘the scariest ride in the world’.

The world’s first horror movie-themed roller coaster, it incorporates a stomach-churning vertical drop of 100 degrees from a height of 100ft, making it the steepest freefall drop in the world. Riders will also endure three inversions.

Book it: Attraction World has one-day passes to Thorpe Park for £35 for adults, £21 for children.

Superbreak offers overnight packages, including one night’s bed and breakfast at the St Giles Hotel Heathrow and a day’s entry to Thorpe Park from £177 for a family of four.   Tel: 0871 221 2828

Two new attractions will be unveiled when Alton Towers opens on March 18.

Created by SEA LIFE, with creatures from seas and oceans around the world.

Book it: Alton Towers Breaks offers overnight packages to the on-site Splash Landings Hotel, next to the water park, from £222 for a family of four, including two days’ entry to the park and breakfast.

Tickets for a family of four plus an overnight stay in an off-site hotel costs from £169 with Holiday Extras. The operator is offering a free extra day in the park to clients booking a stay at the Splash Landings or Alton Towers hotels. Tel: 0871 360 2020

Chessington World of Adventures and Zoo

Surrey park Chessington World of Adventures has seven new attractions this year, including…

This twice-daily presentation will include meerkats, coati, macaws and other exotic species.

Severak new characters such as Miss Information and Dennis the Menace will be roaming the park providing impromptu entertainment.

Book it: Attraction World sells tickets for £33 for adults, £22 for children.

A total of £4 million has been invested in Blackpool Pleasure Beach, with the changes including a new state-of-the-art ticket centre that the park hopes will ease queues.

A family attraction with interactive displays covering a variety of subjects, including performing arts, maths, English, science and history.

Visitors who don’t want to pay upfront for rides can buy a £5 Pleasure Beach Pass, which gives access to the Chinese Puzzle Maze, entrance to the South Beach Show and the new Spectacular Dancing Water Show plus free rides on the Pleasure Beach Express.

Book it:Pontin’s Blackpool holiday park costs from £109 per adult and £55 for kids for a three-night half-board break in April.

Lastminute.com is offering 50% off double rooms at the Big Blue Hotel, situated at the south entrance of the Pleasure Beach, which now cost from £50 per room per night in March.

Kingdom of the Pharaohs

This new area of Legoland will include two new rides, Laser Raiders and Scarab-bouncers. On Laser Raiders youngsters, armed with laser guns, have to battle their way through a tomb in search of treasure.

Book it:Superbreak offers one night’s bed and breakfast at the three-star Jurys Inn London Heathrow hotel with two days’ entry to Legoland for £158.50 for a family of four.

Families of four booking one night or more at the Hilton Basingstoke Hotel through Holiday Extras will get two days’ free entry to Legoland for the kids. Bed-and-breakfast packages cost from £144, including park entry.

Tickets for Movie Park Germany in Bottrop-Kirchhellen are available from Keith Prowse Attraction Tickets for the first time this year.

Admission to the park, which has five themed areas boasting Hollywood film sets, stunt demonstrations and roller coaster rides, costs from £29 per person.

A fourth on-site hotel, the four-star Gold River, is set to open this summer in the Far West area of PortAventura in Costa Dorada, Spain.

Inspired by the Wild West, the hotel is divided into four sections and guests can choose from standard rooms with buffet-style meals, self-catering family rooms sleeping up to six, suites with room service and an à la carte restaurant, or cabins with or without kitchens and dining areas.

Thomas Cook has seven-night half-board packages for the Hotel Gold River, starting from £1,588 for a family of four, including flights departing in October. Tel: 01733 417 100