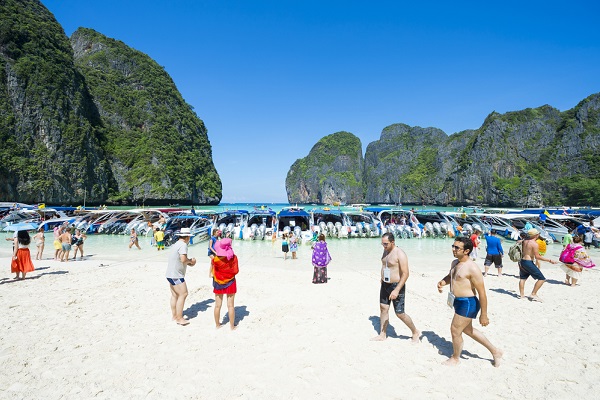 Thailand’s Maya Bay beach – made famous by Danny Boyle’s film The Beach – is being shut to tourists for the first time from next month.

Thai authorities are giving the short strip of sand on the island of Ko Phi Phi a chance to recover from the strain of thousands of daily visitors from June 1 until September 30, the country’s relatively low season.

Thailand’s Department of National Parks, Wildlife and Plant Conservation issued a notice saying it realised “the deterioration of the ecosystem in the area of Maya Bay”.

It is thought the number of people allowed to visit the beach will be reduced when the beach re-opens later in the year.

“We are a beautiful country but we have to protect our natural resources,” Thon Thamrongnawasawat, an advisor to Thailand’s National Parks department, told the BBC.

“We have significant information that all the boats that come in and out really impact the coral reef.

“We won’t close it to tourism forever but have to do something to save our sea, and we have to start at Maya Bay.”

Maya Bay has become a bucket list destination for travellers, gap year students and holidaymakers, with many only staying for a couple of hours.

Tourist Lara Vogelsberg, 23, from Cologne, said: “The beach in the film is very relaxing, there are no people to be seen, and you get this idea of a very lonely place in the middle of nowhere.

“Then you come here and you think you’re in Times Square in New York.”