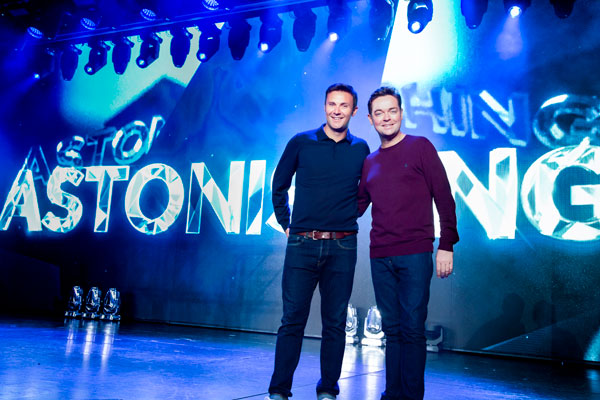 Agents mingled with celebrities and soap actors yesterday at a special performance of a new P&O Cruises magic and illusion show on board flagship Britannia in Southampton.

Astonishing has been produced for the line by BAFTA-winning presenter and entertainer Stephen Mulhern and performer Jonathan Wilkes.

Astonishing combines the production talents of Mulhern and Wilkes with dance by leading choreographer Paul Domaine and the trickery of master illusionist Guy Barrett.

The show is being staged on P&O Cruises’ ships Britannia, Ventura and is to be introduced onto Azura.

Senior vice president Paul Ludlow said: “As its name implies, Astonishing is an extraordinary and visionary show that is unlike anything seen before on a UK stage.

“Bringing together the world of magic, dance, illusion and mystery, and using the latest technology of the giant LED screens in the theatres, the show will captivate our guests.

“With plenty of surprises for the audience it takes entertainment to an entirely new level and is truly game-changing.”

Mulhern said: “Producing this show with Jonny is the culmination of a dream for me. I obviously don’t want to give anything away so all I will say is that it does exactly what it says on the tin and the audience should be prepared to be amazed.”

Wilkes added: “It’s been a long time in the making but the show is now ready and we know that it’s certainly going to be astonishing.

“We’ve partnered with some of the best in the business – Guy Barrett who is Mr Illusion and Paul Domaine who has worked with Kylie Minogue, Elton John and Stevie Wonder – and we’ve come up with a show that is truly ground-breaking.”