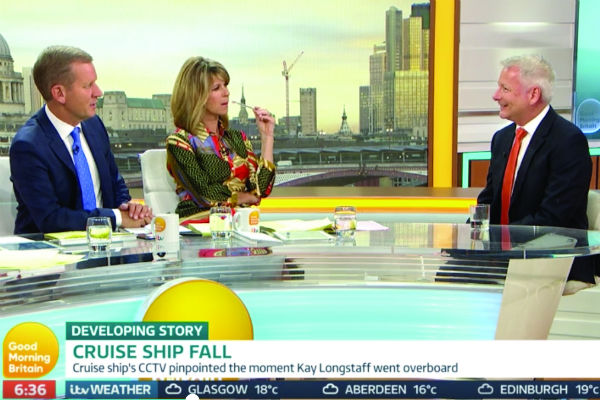 No one acting responsibly has ever fallen off a cruise ship, according to the boss of the cruise industry body.

Defending the safety of cruising on ITV’s Good Morning Britain, after a woman fell off a ship into the Adriatic and was rescued 10 hours later, Clia UK & Ireland director Andy Harmer said the industry had an excellent safety record. He said incidences of people falling overboard were “incredibly rare”.

Pressed by presenters Jeremy Kyle and Kate Garraway on whether it was safe to cruise, Harmer said: “One of the reasons why record numbers of Brits now cruise is because these ships are amazing. Safety and security are at the centre of everything we do.

“There have been no known cases of someone acting responsibly who has accidentally fallen over a cruise ship railing.
“Two million Brits took a cruise last year and had a very safe and enjoyable holiday.” Only one in seven million cruise passengers go overboard, according to Clia.

Flight attendant Kay Longstaff was sailing on Norwegian Star as it travelled from Vargarola, in Croatia, to Venice on Saturday when she went overboard from the aft of the ship.

Details surrounding how she fell were unclear.

Harmer said: “If there is a [person overboard] incident – and they are incredibly rare – we will want to find out what happened, to make any adjustments to safety.”

Longstaff said she was “lucky to be alive” after being pulled from the water about 60 miles offshore.

Cruise specialist agent Caroline Jenkins of Travel Counsellors, who boarded Norwegian Star in Venice on Sunday, said: “I have taken my children and family on cruises and never have doubts about safety.”

Clia posted a statement on its website to help agents allay any fears customers might have about the safety of cruising.