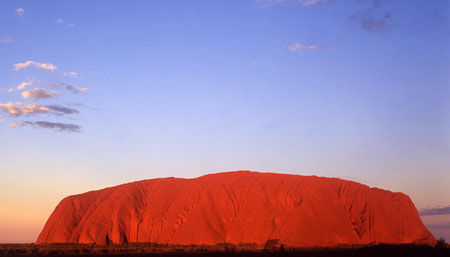 Despite the dry, dusty heat, every tourist’s wish list includes Ayers Rock (Uluru) in Australia’s Red Centre. This giant rock formation is a sacred Aboriginal site that has stood in the middle of the bush for more than 300 million years.

Government plans to ban visitors from climbing the rock highlight both its popularity and cultural significance, but the route to the top is just one of many ways to experience Ayers Rock. Below we look at some of the alternatives on offer, from hikes around the rock to dinner under the stars.

Most visitors choose to hike around the base of the rock, an eight-mile amble along hot and arid paths.

Ayers Rock might be surrounded by desert, but its landscape is far from barren. The region’s red dirt is actually alive with flora and fauna as it receives a healthy dose of rain each year.

Guides will point out native vegetation, such as eucalyptus, mulga and witchetty trees, home to the famous witchetty grubs. These protein-rich larvae are a staple food for Aboriginal people, who enjoy them raw or toasted.

Passed from generation to generation, the stories reveal how ripples on the rock were caused by ancestral snake woman Kuniya, while cave tunnels were left by a marsupial mole.

Touring with a guide is highly recommended, as they can point out these holes, markings and caves, and recount the stories behind them. Ayers Rock is also home to a number of cave paintings that illustrate Aboriginal stories.

View Ayers Rock at sunrise and sunset to see how the colour of the rock alters with the changing light conditions, as the sun helps to cast a burnt-orange glow over the sandstone rock.

The red hue of the sky and the cloud formations also make for top photo opportunities. All organised tours will include a chance to see the rock during sunrise or sunset.

Dinner under the stars

Red Centre experiences and excursions provide opportunities to earn extra commission. A popular excursion is the Sounds of Silence evening, where guests watch the sun setting over Ayers Rock while listening to a didgeridoo player.

Dinner consists of champagne and exotic canapés made from kangaroo and crocodile meat, followed by a luxury barbecue buffet.

After the meal, a stargazing expert will point out the southern hemisphere’s constellations, and diners can get a closer look at the stars and planets through a telescope. A camel ride across the desert at sunset is another popular add-on, particularly well received by families.

Within striking distance of Ayers Rock and equally deserving of exploration is Kata Tjuta, also known as the Olgas. These 36 domes might be overshadowed by Ayers Rock in terms of international fame, but they’re equally as impressive in scale, with the largest one topping 546 metres, trumping Ayers Rock’s 348-metre height.

Visitors can head to the site independently, but they may feel safer joining a Valley of the Winds trek, so called because of the strong gales that rage between the rocks. The five-mile trek involves scrambling over rocks and a few steep ascents, so participants should be reasonably fit.

Fewer tourists visit the Olgas compared with Ayers Rock, which makes it easier to spot native animals, such as kangaroos.

The Anangu people do not allow tourists to take photographs of certain sacred parts of Ayers Rock because they believe this removes its spiritual significance. The same rule applies to taking leaves or rocks from any parts of the landmark believed to be sacred.

Many visitors who have taken rocks over the years have been struck by guilt and sent them back with notes of apology. The Ayers Rock Cultural Centre has a ‘Sorry Book’, which includes letters from people who believe their lives have been plagued by bad luck because they took a memento from Ayers Rock.

The Anangu people themselves say there is no curse attached to the removal of rocks; they would just prefer it if visitors didn’t do it.

To climb or not to climb?

Visitors are permitted to climb Ayers Rock, but it should only be undertaken if tourists are physically fit and do not suffer from heart problems.

This warning should not be taken lightly, as more than 35 people have fallen to their death, while others have been injured attempting the ascent. Some tracks have been worn smooth, so climbers have to haul themselves up by chains.

Moreover, the Anangu people want visitors to respect their culture and avoid trampling their sacred site because of its spiritual importance. Climbing erodes the rock and visitors can pollute the waterholes.

This debate has been brought to fresh life by a government proposal to close the rock to climbers. A controversial draft plan has generated widespread dissent from some, who claim the closure would deal a major blow to tourism.

It’s worth keeping your clients abreast of these developments; they can then choose whether to hurry Down Under to climb the rock while they still can, or refrain from making the ascent out of respect for the local Anangu people’s request.

Ayers Rock has one resort that features five hotels, varying from boutique design-led property The Lost Camel, to family-friendly Desert Gardens, to the upmarket Sails in the Desert, which has a new chic spa.

The resort has several restaurants, a supermarket and craft shops selling the popular Aboriginal dot-paintings. For well-heeled clients, suggest a stay at upmarket wilderness camp Longitude 131, which has 15 five-star luxury tents.

Keith Prowse offers a one-day Ayers Rock tour for £61 per person, including a circuit tour of Ayers Rock, a walking trail to Kata Tjuta, and the chance to watch the sunset over Ayers Rock while enjoying a buffet. keithprowse.com/agents 0844 209 0382

Travel 2 offers a three-day Essential Ayers Rock tour for £361 per person, including two nights’ accommodation, transfers, a tour of Kata Tjuta, a sunrise and sunset tour, and the Sounds of Silence dinner, departing between July 1 and November 30. travel2.com 0800 0224 182

Explore offers the 14-day land-only Outback Adventure for £1,701 travelling from Sydney to Darwin, including a walk around the base of Ayers Rock, a trek around Kata Tjuta and the chance to view Ayers Rock at sunset, departing December 5. explore.co.uk 0844 499 0904