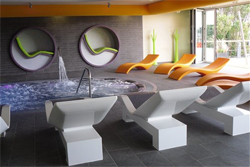 The new hotel is more upmarket than traditional Butlins accommodation. Key features designed to attract new clientele include a spa, which has 10 treatment rooms, a hot tub and a snow cave, and disco showers.

Bourne Leisure, which owns Butlins, expects 50% of Ocean Hotel customers to be experiencing Butlins for the first time.

Other family-friendly features in the 200-rooms hotel include a no-monsters-under-the-bed guarantee with blue lights under children’s beds and space under adults’ beds to store luggage. The hotel also has two ‘adapted’ rooms on each floor for disabled customers.

Bourne Leisure head of retail sales Allan Lambert said he expected the hotel to be sold out for August and September – and, beyond that, for occupancy levels to be in excess of 90%.

Lambert said he was working with travel agencies to make sure they can capitalise on the media and consumer interest generated by the launch. The company is investing in an agent information programme, and has issued agents with information packs, brochures, and badges saying ‘ask me about Ocean Hotel’. It will also be offering agents free day passes to see the hotel for themselves.

Lambert said: “With the current focus on the UK, many people may be surprised by the quality and ‘wow’ factor of what Butlins can offer at the Ocean Hotel. We think this could help convert ‘considerers’ into people who actually book [a holiday].

“We’re not discounting, so there are good earning opportunities for agents – and we are running a £5 booking incentive for individual agents.”

A four-night mid-week break for a family of four staying in a mariner room including breakfast, costs £366off peak. This increases to £800 during peak times.