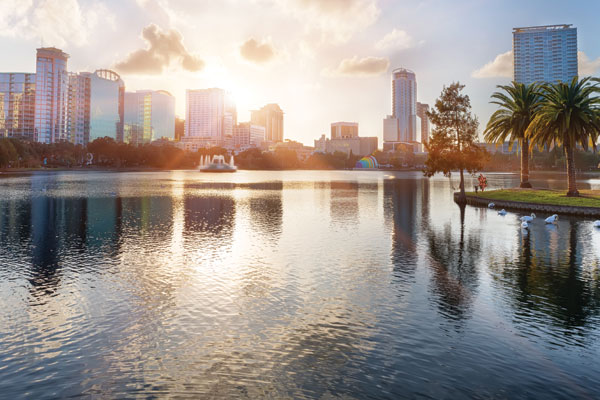 Discover a different side to the theme park capital of the world, says Ella Buchan.

“You mean Disney Springs, right?” That was the reaction when I told people of my plan to explore downtown Orlando. Even locals assumed I was referring to the area of bars and restaurants formerly known as Downtown Disney.

Yet, beyond Mickey Mouse, Harry Potter and the overall aura of magic dust that keeps families flocking to the city, there’s an equally beguiling world of farm-to-table food, elegant museums and speakeasy-style bars.

Visitors to Orlando tend to hop between Universal, Walt Disney World and SeaWorld. But for clients wanting to explore a little beyond the parks – whether they’re travelling without kids or have a day or two spare on a business trip – the neighbourhoods that make up Orlando’s downtown offer a vibrant and characterful alternative.

From brunch tours and bars hidden inside furniture stores to a museum overflowing with stained glass, here are suggestions for clients looking to discover the real Orlando.

Not all Orlando’s parks come with white-knuckle rides and Disney characters. Some have lakes, woodland and hiking trails instead.

Charming Ivanhoe Village is packed with vintage, retro and antique stores, including local favourites Rock & Roll Heaven and Elephant Walk Interiors and Antiques. Washburn Imports even has a bar and restaurant tucked past its one-off furniture finds and rare textiles.

The Church Street District is home to the huge Amway Center, which hosts big-name musical acts and basketball matches, and Mad Cow Theatre for stage plays and cabaret shows.

“Centuries-old cypress trees rise incongruously from the lakes, which are bordered by sprawling estates with immaculate lawns.”

To the northwest, College Park is a good spot for souvenir and gift shopping, as well as paddleboarding and kayaking tours on the lake. Neighbouring Loch Haven Park is a cultural hub with the Orlando Museum of Art, Science Center and Shakespeare Theater.

There are more shops to potter around in well-heeled Winter Park, which has quietly been one of Orlando’s poshest neighbourhoods for decades. Rows of boutiques run perfectly parallel to tree-lined pavements, while the Charles Hosmer Morse Museum of American Art is a sparkling gem of stained glass, leaded lamps and necklaces by Louis Comfort Tiffany (whose father, Charles Lewis, founded the jewellery company).

Scenic Boat Tours offers on-the-hour trips on Lake Osceola for about £10. The open-sided boats cruise through a chain of pristine, cobalt-blue lakes linked by canals overhung by fluffy Spanish moss. Centuries-old cypress trees rise incongruously from the lakes, which are bordered by sprawling estates with immaculate lawns (I spied an alligator, basking in the sunshine, on one).

The scenery is just as magical as anything Walt dreamed up, yet so tucked away, you’d barely know it was even there.

The food in Orlando is reason enough to visit. Many chefs cut their cooking chops in the resorts before opening up their own eateries in downtown.

Downtown South Orlando (or Sodo) is fast becoming a foodie favourite thanks to lavish cupcakes at Sugar Divas Cakery and healthier (yet still delicious) options such as FreshKitchen.

For clients looking for a taste of downtown’s food scene while still spending most of their time in the parks, suggest Orlando Foodie Tours. British-born Katie Bean set up the company to showcase the unexpected edible delights of the city’s neighbourhoods. The signature tour, for example, is a meal with a dish and drink pairing at each of three carefully selected restaurants.

Or there’s the brunch tour with stops such as Sanctum Cafe, the kind of place that makes you feel healthier just stepping through the door; Swine & Sons, which cures coffee-smoked bacon; and Valhalla Bakery, which sells fluffy vegan doughnuts topped with rainbow cereal flakes and pink icing.

The tours, starting at about £70, include transport and the chance to chat to chefs at each stop. They can be booked online. orlandofoodietours.com

Anyone spending a night or two in downtown will need plenty of food, especially if they’re indulging in the nightlife. This is heaven for cocktail fans, with a surprising number of speakeasy-style bars. Tucked in car parks, hidden behind unassuming doors and accessed via password, these are a world away from the theme parks, but arguably just as fun.

There’s the Treehouse, a tiny bar specialising in craft cocktails and reached via a narrow, turf-carpeted staircase. Hanson’s Shoe Repair has a lovely twinkly patio, but you’ll need a password to access it. Guests can contact the bar in advance, or ask an in-the-know local. It’s worth it, though, for cocktails such as the ‘corpse reviver’, a potent concoction of gin, absinthe and Cointreau. Or try Herman’s Loan Office, which is like a plush, leather-filled library, tucked behind a discreet door in a car park.

While downtown’s hotels were once seen as a cheaper alternative to staying on site at the theme parks, accommodation options are stepping up a notch as interest in the area grows.

Most are aimed at younger travellers and those looking for smaller, more intimate properties. Aloft Orlando Downtown, for example, is a breezy and stylish space prioritising essentials – high-speed Wi-Fi, a comfy bed and a decent bar – over frills. Its proximity to the Amway Center makes it a great recommendation for clients travelling to Orlando for a concert. Doubles start at about £110.
aloft-hotels.marriott.com

EO Inn, a boutique hotel with cosy rooms and an outdoor hot‑tub area, is right next to Lake Eola Park and an easy walk to some of the area’s best nightlife. Doubles from about £90.
eoinn.com

Due to open in Sodo in the spring, The Delaney Hotel’s minimalist yet cosy rooms aim for an apartment-style feel, for visitors who really want to experience the city like a local. Rates are yet to be announced.
staydh.com

While downtown Orlando is packed with often-overlooked attractions, it’s difficult to ignore what the city is most famous for, and the theme parks have plenty to entertain clients travelling without kids.

Recommend going outside school holidays for the best deals and lighter crowds. October is a fun time to visit, with spooky happenings such as Universal’s Halloween Horror Nights and SeaWorld’s Halloween Spooktacular.

Foodies should consider visiting during Epcot’s International Food & Wine Festival, which runs for about 10 weeks every autumn. The stalls dotted around Bay Lake represent the food and drink of different nations, from German beer and bratwurst to English fish and chips.

“October is a fun time to visit, with spooky happenings such as Universal’s Halloween Horror Nights and SeaWorld’s Halloween Spooktacular.”

Disney even has its own ‘speakeasy’. Tucked down a corridor in the Polynesian Village Resort, Trader Sam’s Grog Grotto and Tiki Bar is decked out with ropes and treasure chests, like a pirate’s holiday home. Some of the cocktails are delivered by costumed bar staff, accompanied by special effects such as thunder and lightning.

And, though it shouldn’t be confused with downtown Orlando, Disney Springs is a great venue for dining, bars and browsing souvenir shops. There are Cirque du Soleil shows on site, plus a new Prohibition-inspired bar, Enzo’s Hideaway, serving old-school cocktails.

Vacations to America offers 14 nights in a Kissimmee villa with a private pool from £1,299 per person, based on two adults sharing. The price includes Norwegian flights from Gatwick, departing May 1, 2019.
vacationstoamerica.com

USAirtours offers a week at the Rosen Inn International, Orlando, from £679 per person, based on two adults sharing, with Virgin Atlantic flights from Gatwick on May 21, 2019.
usairtours.co.uk

Active holidays in Tampa Bay, Florida
What to expect at Universal’s Halloween Horror Nights
Autism-friendly holidays at SeaWorld in Orlando