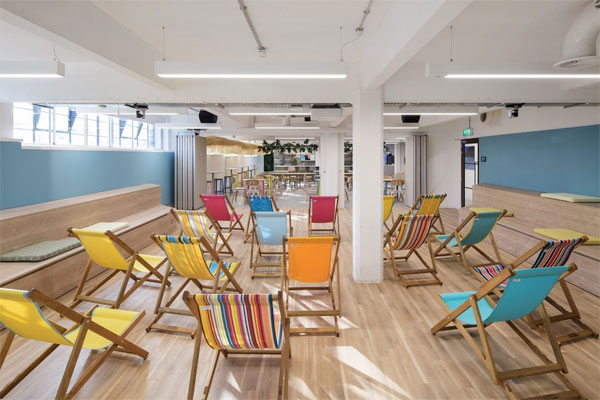 The online travel agent has relocated the majority of its business operations to the Aeroworks building, a former aircraft components factory in central Manchester, following a multi-million pound refit.

The company’s contact centre will remain at previous headquarters at Park Square in Cheadle, which will also undergo major redesign and refit, due for completion early next year.

The new campus-style office has been designed with a range of open working and social spaces, including a 250-seat auditorium and theatre, games room and ‘beach bar,’ as well as breakout areas, a virtual aquarium and a chill-out room with hammocks.

A user experience testing lab and development team pods will all feature their own lounge, showcase and display areas.

On the Beach plans to almost double its workforce to more than 500 staff in the next three to five years, the majority coming from expansion of its digital teams, focusing on development, design and marketing as well as product and business analysis.

Chief executive Simon Cooper said the new base will enable the firm to attract the best talent from Manchester and around the rest of the UK.

“At heart On the Beach has always been a Manchester-based business, and now we are a business based in the heart of Manchester,” he added. :We’re excited about being at the centre of the city’s vibrant digital community and for what the future holds as we continue to grow.”

Lord Mayor of Manchester June Hitchen, who officially opened the new premises, said: “Manchester is known as one of the UK’s centres of innovation, creativity and industry.

“The decision to establish this new office here is a real reflection of what the city has to offer, as well as recognising the huge amount of talent that we have in Manchester and also the wider region.”