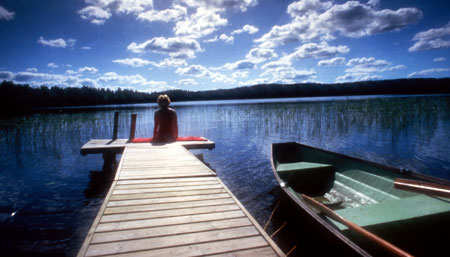 Nestled between Norway’s famous fjords and the eastern reaches of Russia, Finland has a relatively low profile as a tourist destination for the UK. It’s best known for its winter Lapland product, yet there’s much more to recommend it.

It’s a beautiful country of 180,000 islands and even more lakes. The pretty cities of Helsinki, Turku and Tampere have many sights, and it’s the home of Santa, Nokia and the sauna. Plus, most Finns speak English, so it’s easy to get around.

The lion’s share of Finland’s tourists arrive in winter, flocking to the northern area known as Lapland. While Lapland technically spans areas of Norway, Sweden and Russia too, Finland has become synonymous with these winter breaks, and the tourist facilities are most developed there.

The Father Christmas experience is a huge selling point, with plenty of operators such as Thomas Cook, First Choice, Transun, Cosmos and Inghams running trips. Families can fly there for as little as a day to meet the big man in red, take a sleigh ride and have a go at some snowy pursuits.

Many of the bigger operators take parties to more commercialised towns such as Rovaniemi, where there’s a special Santa Claus village with an office for the man himself, a toy factory manned by elves and an exhibition explaining his secrets – like how he fits down chimneys and visits everyone in the world in a single night. Facilities are extensive, but these areas are likely to be crowded.

Smaller, specialist operators such as Specialised Tours and Scantours choose quieter options such as Harriniva, where Santa may be played by the school teacher and the elves by local kids, making the whole experience more amateur, but infinitely more Finnish.

Temperatures can drop as low as -30C, but it’s usually about -15C in January (the coldest month). Recommend clients bring plenty of layers, thermals and thick socks, although most hotels and operators will provide outerwear and boots.

There are many other activities on offer in Lapland, including snow-shoeing, reindeer sleigh rides, husky dog-sledding and snow-mobiling – or visitors can just join in a good old-fashioned snowball fight.

Owner of Specialised Tours Margaret Scowen says: “The atmosph-ere in the wilderness is really special, and Finland offers a wonderful range of activities. Christmas, new year and February half term are really popular, and clients need to book four to six months ahead.”

The magic of the Northern Lights can be seen, but to have the best chance of spotting the aurora borealis, send clients in September, October, February and March.

Ski is a big market for the Finnish winter – particularly for beginners, with many resorts offering gentle runs. Send clients to Yllas, Saariselkä, Levi or Ruka. Inghams has also introduced the new resort of Salla this year, which offers learn-to-ski and board packages.

Beyond the Lapland winter product, however, Finland isn’t really known at all. This anonymity goes some way to explaining why tourists choose the fjords of Norway, Sweden’s pretty Stockholm or Iceland’s glaciers and thermal pools instead.

But Scantours managing director Ian Wooger says that Finland has plenty to offer.

“It’s a land of lakes and the midnight sun in summer. It’s unbelievably beautiful, much flatter than either Norway or Sweden, and there are lakes and forests as far as the eye can see.”

Finland’s summer gateway is the capital Helsinki, a city-break destination in its own right. Located on a peninsula that stretches into the Baltic Sea, its charms are particularly lovely in summer as the sun glints off the water late into the night. It’s a pocket-sized city, with only 565,000 inhabitants, but it was the European Capital of Culture in 2000, and there are many museums and galleries.

Senate Square is home to the green and white Lutheran cathedral, and the Suomenlinna Maritime Fortress – set across six islands and built by the Swedes in the 1700s during the conflict between Scandinavia and Russia – is accessible by ferry from Market Square.

Architecture and design are important to the Finns, and 20th-century Finnish architectural guru Alvar Aalto left his mark on the city. There are also many ultra-modern public buildings, such as the National Opera House and the Kiasma contemporary art museum.

However, Finland in summer doesn’t begin and end with Helsinki.

The old capital, Turku, hosts many music festivals in summer, and is home to Moomin World. Visitors access this island theme park, dedicated to the classic fictional children’s characters, across a causeway from nearby town Nanntali.

Tampere, Finland’s second city, is the gateway to its lake district where steamers spend all day chugging through the country’s most stunning lakeside scenery – just make sure clients don’t forget their mosquito repellent.

Summer is also crayfish season, and visitors can go on fishing trips and cook their own catch, or simply visit a restaurant and feast on boiled crayfish washed down with vodka. Particularly adventurous tourists can track brown bears near the Russian border – you can book a trip through Explore.

Lapland has plenty to offer too. The sun never sets and tourists can get active hiking, white-water rafting, cycling, canoeing and salmon fishing.

Wooger identifies two niche markets to sell Finland to in summer: “Try Scandophiles who have been to Norway and Sweden and are looking to tick another box, or those who have some connection to the country – perhaps they have family or friends living there, or they have previously visited for work.

Twin Helsinki with Tallinn (Estonia), just a ferry ride away, or St Petersburg in Russia, which is seven hours by train

Scantours’ independent 10-day Images of Western Finland tour starts from £870, with departures between May and September. It visits Turku, Tampere, Hämeenlinna in the lake district and Helsinki. scantours.co.uk, 020 7554 3530

Specialised Tours’ six-day Winter Adventure at Harriniva departs between November 22 and April 4 and costs from £1,885, including flights, full-board accommodation, transfers and activities including a reindeer safari, a snowmobile safari, snow-shoeing or skiing, and a two-day husky safari. specialisedtours.com, 01342 712785

First Choice offers Santa’s Secret Grotto day trips to Lapland from £399 per adult and £339 per child, departing on December 5 from 14 regional airports. firstchoice.co.uk/lapland, 0871 200 4455