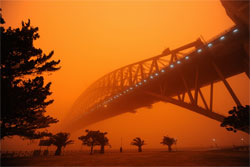 International flights were being redirected from Sydney on Wednesday morning local time after the worst dust storm for 70 years virtually closed down the city.

Some incoming flights were redirected to Melbourne and Brisbane airports while outbound flights faced delays of up to several hours, if they took off at all.

Australia’s most famous landmarks including the Sydney Opera House and Sydney Harbour Bridge were barely visible as the entire city was shrouded in red dust on Wednesday morning local time.

The city’s ferries also stopped operating as the dust clouds blew in from the eastern Outback, which is suffering from one of its worst droughts in living memory.

Children and people suffering from respiratory problems were warned to stay inside because of the thick dust.

Although the dust clouds had largely cleared in Sydney by mid-afternoon, Qantas warned severe delays to flights would last all day due to diverted and late-running flights.

However, Brisbane has come under threat as the dust clouds sweep further north, causing some flights to be delayed.