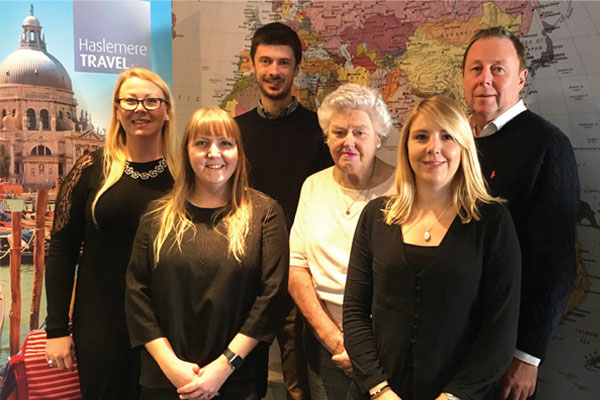 Haslemere Travel may have just marked 30 years in business but that certainly doesn’t mean the agency is resting on its laurels, according to owner Gemma Antrobus.

The next challenge is the peak sales period amid the uncertain climate of Brexit, although so far only one customer has mentioned the ‘B’ word as an excuse to hold off booking.

“The town is certainly quieter, and if we have to wait until March for everyone to book, it will be really painful,” says Antrobus. “People aren’t worried about travel; people are worried about their money, savings and pensions.”

For Haslemere, it is a case of knuckling down to business as normal – which may include a change in payment terms for clients. The credit card fees ban introduced last year has, without doubt, hit the bottom line, Antrobus admits, and for this reason she is considering whether to take balances on credit cards only up to an agreed limit. Already, the agency promotes electronic transfers as its preferred payment method.

“We cannot keep losing money,” she says. “When we tell clients we don’t take Amex, they just pay another way. We encourage money transfers, but it’s harder when clients are in the shop. We will do something, but we’ve not yet made it official. It’s down to communication; if you spring it on clients, then they get angry.”

Antrobus, who bought the business in Surrey’s most southerly town, Haslemere, at the end of 2015 from founders and owners Andrew and Di Brownrigg, but has been managing director since 2008, does not shy away from making big changes.

Since owning the business, she has introduced a back and front-office selling system, and switched the agency’s membership from Abta to TTA. Gemma says: “Everything was on paper. Until three years ago, if we had had a fire, we would have lost everything. Now everything is quick and automated.”

The move to TTA has been just as seamless. “It makes no difference to clients. It’s a good partnership and the TTA is very quick to turn things around,” says Antrobus, who feels the move was the right decision for the business.

Haslemere Travel, which was previously a member of Advantage Travel Partnership before going it alone and sitting outside all consortia, continues to do commercial deals itself with some suppliers with which it has particularly close relationships. It uses TTA’s deals for other suppliers for its customer base of mainly high-end families and retirees.

The eight staff, including Antrobus, all have different skill sets and not all are from travel backgrounds – one has been in travel for 44 years while another switched to travel from a career as a shoe designer.

“I am a big believer in having a team from different backgrounds; you don’t need to have worked in an agency to sell a holiday,” says Antrobus, who had never worked in a travel agency before joining Haslemere Travel.

The agency also has seven homeworkers, operating mostly in the south of England but totally separate from the shop, to provide another revenue stream.

Although the agency has considered buying another shop in the past, it has stuck with one property. But Antrobus admits its long-term future may not be in the same prime, high street location. The shop’s 20-year lease expired last year and Antrobus has replaced it with a shorter, more flexible deal.

“We have a fantastic location but our operating costs are huge,” she says. “In the current climate, I’m not certain having an investment in the high street will pay off.”

Despite being the oldest member of Haslemere Travel’s team, 83-year-old Maureen has no intention of giving up any time soon. Maureen, who works two days a week, started at Haslemere Travel 23 years ago and has the job of typing up clients’ itineraries after they’ve booked. Her favourite holiday is a cruise. “This year will be my 15th cruise with Oceania Cruises,” she says.

Natasha is Haslemere Travel’s newest recruit, joining three months ago from another agency. “There is something exciting about booking holidays for people,” she says. Her favourite holiday is a tailor-made tour. “I have just come back from Sri Lanka and I like New Zealand and countries that offer lots of different things and have a beach at the end.”

Terry has been in travel since leaving school. Prior to Haslemere Travel he worked for Travelcare, previously Keith Prowse Travel, for 29 years.

“I love working for a totally independent agency and being able to sell the right holiday to the right client,” says Terry.

He recalls how travel has changed. “We used to have customers queuing outside
the agency in January and February, but
now it’s busy all year round.

“Travel is constantly changing and now there is so much information available.”

Terry still loves the buzz of the job. “I love meeting people and turning their dreams into reality,” he says. And he is used to unusual requests. “I specialise in cruising and one day two old ladies asked me if they could open the porthole because they don’t like having air conditioning in the cabin!”

What struck me as soon as I walked into Haslemere Travel was just how homely it felt.

From the ‘H’ and ‘T’-designed cushions on the sofa and Rhonda the rhinoceros on the coffee table to the wooden African statues and many artefacts on the shelves, the personal touch stood out.

The spacious agency has a friendly team of staff all ready to help despite being busy. Before I knew it, Natasha was making me a cup of tea and taking me upstairs to see the boss!

As chairman of Aito’s Specialist Travel Agents, Gemma Antrobus is
a well-known face in travel – but this was the first time I had seen her in
her own workplace.

And it was abundantly clear Gemma and her team click.

While Gemma is constantly looking at ways to take the business forward and ensure its smooth running, the staff all have different strengths, from Ben Rowley, the resident expert on winter holidays, to Jenny Martin, who has travelled extensively worldwide as a shoe designer and has impeccable attention to detail.

As I turn to leave, Gemma and Jenny comment on how they like my shoes, which leaves me bouncing out of the shop on a high – no doubt like many of their clients.